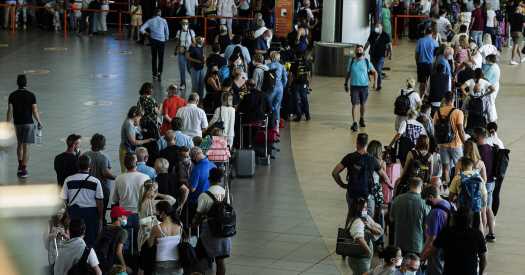 British tourists scrambled to leave Portugal over the weekend in order to beat a Tuesday deadline for a new quarantine imposed by the British government on those returning from Portugal. The country is one of the most popular destinations for British tourists.

The switch of travel rules for Portugal, announced by the British government last Thursday, prompted thousands of British tourists to pay extra to rebook themselves onto early return flights. British Airways and other airlines added flight capacity to help bring them home.

As British tourists headed early for the airport in Faro, a major tourism hub in Portugal’s southern Algarve region, the line there stretched well outside the terminal, according to reports from British newspapers.

The latest quarantine decision came less than a week after thousands of English soccer fans had visited Porto, in northern Portugal, to watch the final of the Champions League, with no quarantine restriction. The decision Thursday to reintroduce restrictions was heavily criticized by British travel operators and opposition politicians. But the government defended the move as a health-safety requirement to help Britain fight a new variant of Covid-19 that originated in India.