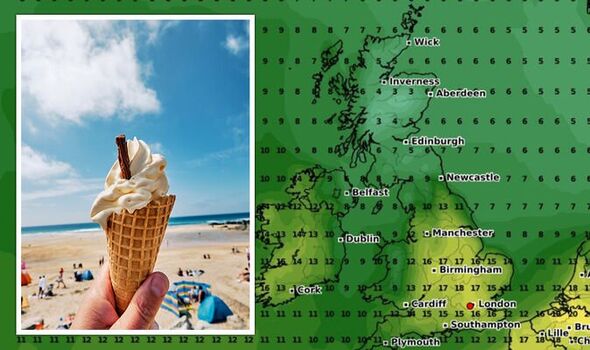 Experts have predicted a brief bout of warmer weather is on the horizon as temperatures are expected to reach mid-teens in the southwest of England by Wednesday. Regions including London, East and West Sussex will enjoy a warm spell ahead of the Easter weekend.

Residents in Kent and Surrey could enjoy temperatures ranging from 16 and 18 degrees, the same temperatures as the hottest part of Greece, according to data available from WXCharts.

Charts show regions around Larissa, the capital and largest city of the Thessaly region, will see a high of 18C this week.

While temperatures around the Greek port city of Thessaloniki sit at a milder 15C and 16C.

Temperatures across the UK drop by a couple of degrees towards the West Country, sitting at around 13C and 14C.

Elsewhere, temperatures fall to around 9C near Newcastle and other northeast regions.

While regions in the northwest sit around 12C.

While southern parts of Britain will be hit with warmer temperatures, the same can’t be said for the rest of the UK.

The Met Office has said that areas in the north will still be subject to chilly conditions, but on the whole, the forecast is drier and less windy than as of late.

Regions in Scotland see the mercury sitting in the single digits with a max of 7C.

The Met Office said: “Breezy and rather cloudy with some rain spreading northeast during Monday and Tuesday.

“Drier and less windy on Wednesday. Becoming warmer in the south, but remaining cold in the north.”

However not all hope is lost as forecasters hint at warmer temperatures for the Bank Holiday could be on the cards for some.

Jim Dale, a meteorologist for British Weather Services, said: “There are two weather systems which threaten some rain next week, one at the start and one at the end of the week.

“However, temperatures look like they are picking up on Monday and this should be the trend into Easter.”

However western parts of the country could see their plans dampened by bouts of rainy weather.

An ‘erratic’ jet stream will bring bouts of rain at the start of this week with the potential for further showers at Easter.

Met Office meteorologist Aidan McGivern said: “The jet stream will move erratically cross the UK during the start to the middle of next week bringing showers or longer spells of rain especially across western parts of the country.”

By the end of the Easter weekend, temperatures are anticipated to dip toward zero in the early mornings.

From Monday April 18, temperatures could plummet to as low as -1C across the southeast of England, and the northwest of the country, according to the latest predictions from WXCharts.

Residents in South Wales will be subject to even chillier conditions, as the mercury is expected to reach -2C.

The warmest of the temperatures will be seen on the east coast, ranging between 1C and 4C from London up through to Suffolk and Norfolk.