Boris rejected the ‘obvious’ need to close UK borders in April ‘because he wanted to be like the mayor from Jaws who kept the beaches open’ and there is STILL no serious policy, says Cummings

Boris Johnson rejected the ‘obvious’ case for closing UK borders last spring because he wanted to be like the mayor from Jaws who kept the beaches open, Dominic Cummings claimed today.

The former No10 chief insisted the PM was told early in the pandemic it was ‘madness’ that there were no tough travel constraints despite the domestic rules.

He said up until March the advice Mr Johnson was equivocal. But he said: ‘After April, though, it’s a completely different story, once we’ve switched to plan B.

‘Repeatedly in meeting after meeting I and others said all we have to do is download the Singapore or Taiwan documents in English and impose them here.

‘We’re imposing all of these restrictions on people domestically but people can see that everyone is coming in from infected areas, it’s madness, it’s undermining the whole message that we should take it seriously. 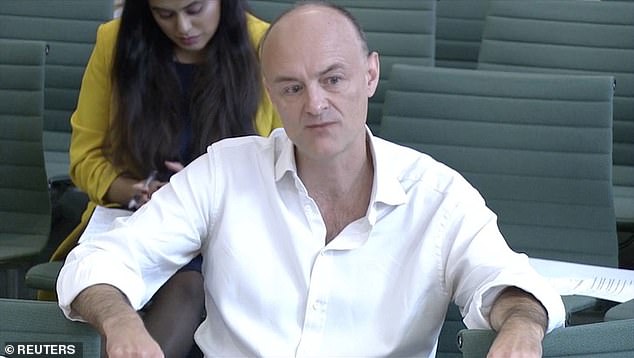 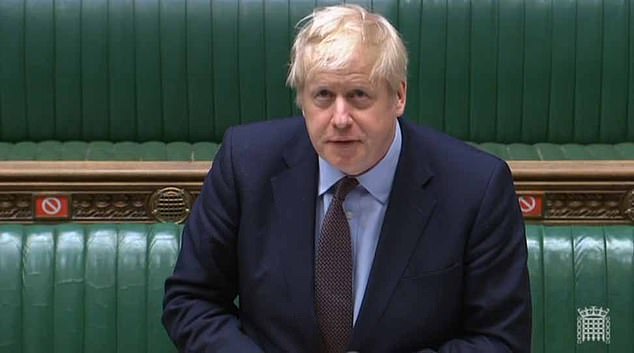 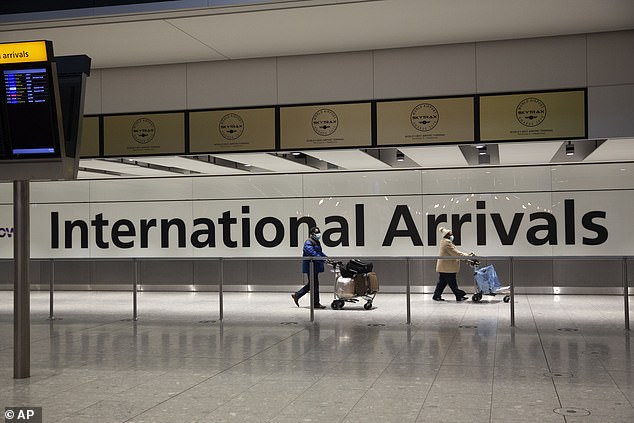 ‘At that point he was back to, ”lockdown was all a terrible mistake, I should’ve been the mayor of Jaws, we should never have done lockdown 1, the travel industry will all be destroyed if we bring in a serious border policy”.

‘To which, of course, some of us said there’s not going to be a tourism industry in the autumn if we have a second wave, the whole logic was completely wrong.’

Mr Johnson said Mr Johnson was being berated by Tory MPs and the media to be less harsh.

‘We never won the argument,’ he said.

Mr Cummings said in his view the UK ‘still doesn’t have a proper border policy’.

In retrospect, he said: ‘Obviously we should have shut the borders in January.’

The comments came as Cummings gave an extraordinary account of the catastrophic response to Covid today – revealing that Mr Johnson viewed it as a ‘scare story’ just a month before the first lockdown and describing the dramatic moment when a top civil servant admitted: ‘We are absolutely f*****.’

The maverick former No10 chief said the government – and he personally – ‘fell disastrously short’ in its response to coronavirus.

Mr Cummings conceded he should have been ‘hitting the panic button’ in mid-February but he had been ‘wrongly reassured’ by messages from the WHO and others about the situation in China.

The government was certainly not on a ‘war footing’ at the time, with senior figures including Mr Johnson himself going on holiday. ‘Lots of key people were literally skiing in mid-February,’ he said.

He said Mr Johnson regarded the pandemic as a ‘scare story’ and the ‘new Swine Flu’ at that stage, and had even suggested he could be injected with the disease live on TV by medical chief Chris Whitty to show people it was not a threat.

In a detailed timeline, Mr Cummings said that on March 12 at 7.48am he texted the PM and said the Cabinet Office was ‘terrifyingly sh**’ and Covid restrictions should be stepped up immediately.

However, on the same day Donald Trump was trying to persuade the UK to join a bombing raid in the Middle East.

And Carrie Symonds was ‘going crackers’ at the PM over a ‘trivial’ story in the papers about their dog Dilyn.

Mr Cummings said on the evening of March 13 the second most senior civil servant at the Cabinet Office, Helen MacNamara, came in and relayed to him the view of another senior official that ‘there is no plan’ and ‘we’re in huge trouble’.

Mr Cummings said she told him: ‘I think we are absolutely f*****’ and warned that ‘thousands’ of people could die.

Despite the rising alarm, at around the same time there were still meetings going on with officials suggesting people should be advised to have ‘chicken pox parties’ to spread the virus more quickly.

Mr Johnson tried to shrug off the vicious onslaught at a bruising PMQs this afternoon, denying the government was ‘complacent’.

‘None of the decisions have been easy,’ the premier said. ‘To go into a lockdown is a traumatic thing for a county. We have at every stage tried to minimise loss of life.’

But the committee heard hours of damaging allegations, including that even in the first half of March Mr Johnson was still of the view that the threat to the economy was more significant than the public health risk.

Mr Cummings said the scenes were reminiscent of disaster movie Independence Day, where star Jeff Goldblum says the plan to resist the alien invasion has failed and there needs to be a new one.

The former aide also launched an excoriating attack on Matt Hancock, accusing him of ‘lying’ about PPE and access for treatment for those suffering from the disease.

He insisted the Health Secretary told ministers ‘categorically’ in March that people would be tested for Covid before being returned to care homes, but it later transpired that it not happened.

‘We sent people with Covid back to the care homes,’ he said.

He claimed that the then-Cabinet Secretary Mark Sedwill told him he had ‘lost confidence’ in Mr Hancock’s ‘honesty’ during key meetings.

Mr Cummings said he went to Mr Johnson in July last year and said that he was going to leave because Downing Street was in ‘chaos’. 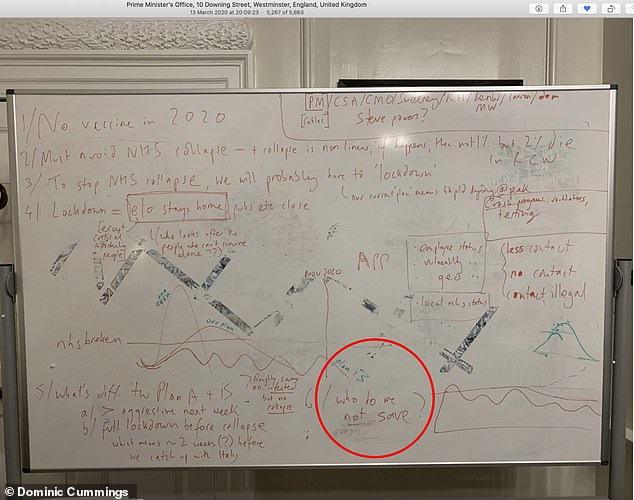 He said he told the PM that he was ‘not prepared to work with people like Hancock any more’, accusing Mr Johnson of being ‘frightened’ to give him enough power to set up a functional system.

The former Vote Leave chief said Mr Johnson retored that ‘chaos isn’t that bad’ because it ‘means everyone has to look to me to see who is in charge’.

Mr Cummings revealed that neither he nor Mr Johnson attended Cobra meetings in the early stages, and he did not advise the PM to do so. He said the sessions were often just ‘powerpoint presentations’ and ‘not massively useful’ and there were many leaks.

‘In February the Prime Minister regarded this as just a scare story, he described it as the new swine flu,’ Mr Cummings said.

When asked if he had told the PM it was not, Mr Cummings added: ‘Certainly, but the view of various officials inside Number 10 was if we have the Prime Minister chairing Cobra meetings and he just tells everyone ”it’s swine flu, don’t worry about it, I’m going to get Chris Whitty to inject me live on TV with coronavirus so everyone realises it’s nothing to be frightened of”, that would not help actually serious panic.’

In a damning assessment, Mr Cummings said: ‘The truth is that senior ministers, senior officials, senior advisers like me fell disastrously short of the standards that the public has a right to expect of its Government in a crisis like this.

‘When the public needed us most the Government failed. I would like to say to all the families of those who died unnecessarily how sorry I am for the mistakes that were made and for my own mistakes at that.’

Mr Cummings accused Matt Hancock and other officials of briefing at the time that the strategy was to reach ‘herd immunity’, which was seen as an ‘unavoidable fact’. He insisted it is ‘completely wrong’ that the government is now denying it was their aim.