Graphic body camera video has been released showing the moment a white sheriff’s deputy in the San Francisco Bay Area fatally shot and killed a homeless black man holding a knife about 40 seconds after trying to stop him on suspicion of throwing rocks at cars.

The footage capturing Deputy Andrew Hall gunning down Tyrell Wilson, 33, in the middle of a busy intersection within 2 seconds of ordering him to drop the knife was released Wednesday, the same day prosecutors charged Hall with manslaughter and assault in the fatal shooting of an unarmed Filipino man more than two years ago.

The charges came a day after former Minneapolis police officer Derek Chauvin was convicted of killing George Floyd, a black man whose death last May helped spark a national reckoning over racial injustice and police brutality. 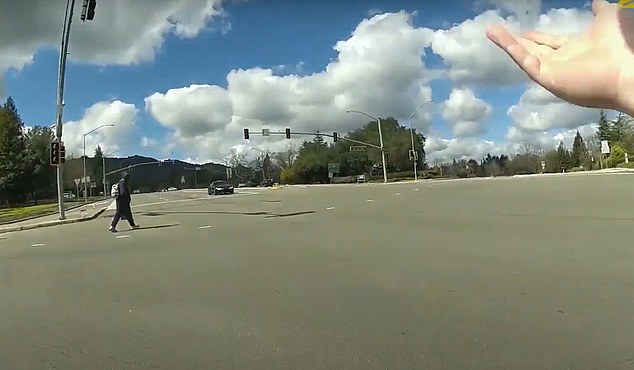 Contra Costa Deputy Andrew Hall’s hand is seen beckoning to Tyrell Wilson, seen on the left crossing an intersection in Danville, on March 11. Graphic body camera footage released Wednesday, April 21, 2021, shows Hall call out to Wilson, 33, accusing him of jaywalking, and then shoot him in the middle of the intersection within seconds of asking him to drop his knife 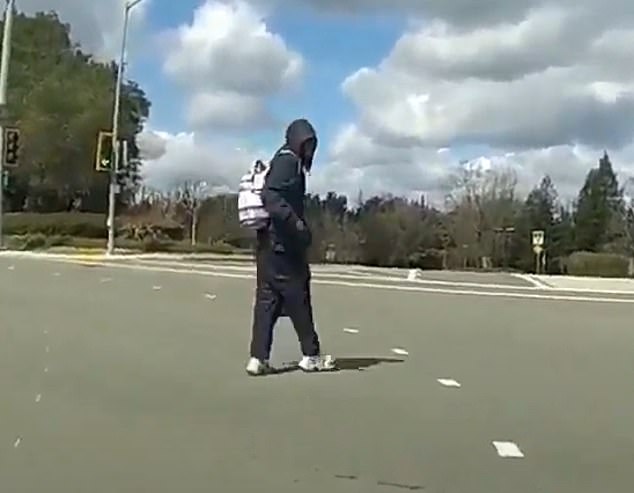 Wilson, a homeless man who was suspected of throwing rocks at cars, initially refused to approach the deputy 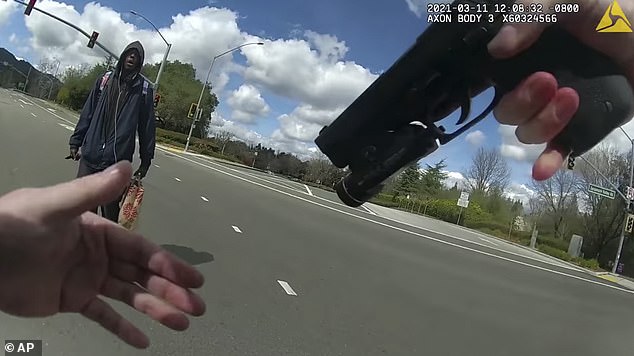 This image from Hall’s body camera video shows Wilson, left, holding a knife in his right hand, in front of the deputy 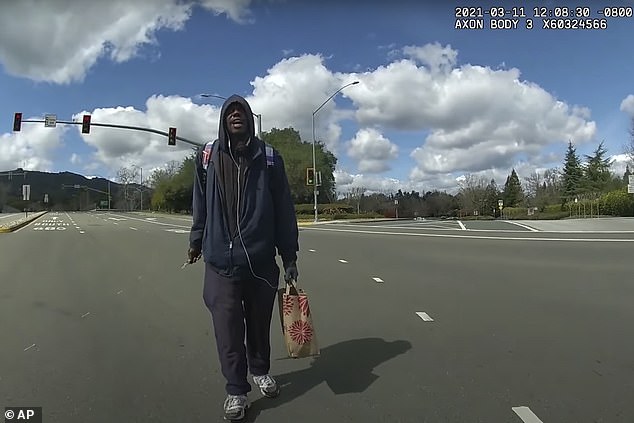 Wilson yells at the officer: ‘Don’t f***ing touch me. Touch me and see what’s up’

The new video in California shows Hall calling out to Wilson and walking toward him on March 11 as Wilson walked away.

‘We’re not playing this game, dude. … you’re jaywalking, you’re throwing rocks,’ Hall tells Wilson, who eventually turns to face the deputy, holding a knife, and says, ‘Don’t f***ing touch me. Touch me and see what’s up.’ 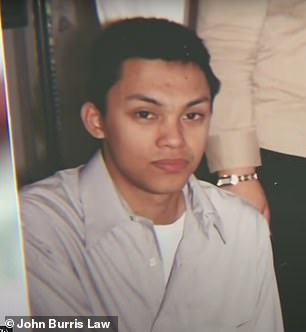 On the same day the body camera was released, Hall was charged with manslaughter and assault in the 2018 killing of Laudemar Arboleda (pictured), an unarmed Filipino man

As they stand in the intersection, Hall asks him three times to drop the knife as Wilson motions toward his face, saying, ‘Kill me.’

Hall shoots once, and Wilson collapses as drivers watch and record cellphone video.

The deputy radios in ‘shots fired’ and calls for police backup and medical assistance, as Wilson lies on the ground in a pool of blood.

‘Why did you do that?!’ Wilson is heard shouting at Hall.

The deputy and other officers who arrive on the scene begin administering first aid to Hall while urging him: ‘stay with us.’

The entire confrontation from start to finish lasted about a minute. Wilson died less than a week later at a local hospital.

In last March, dozens of people, including Wilson’s family, held a vigil in his honor and marched to the Danville Police Department to demand justice for him. 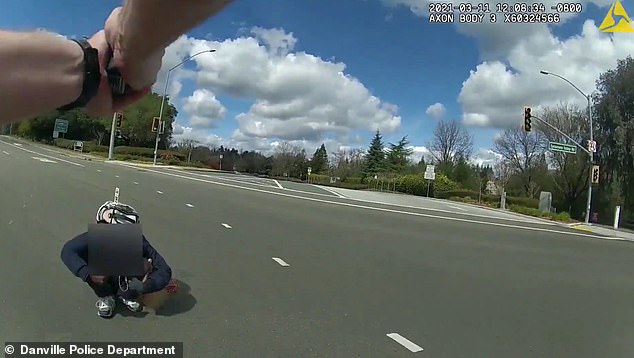 In the video released on Wednesday showing Wilson’s shooting, Hall is seen firing a shot within 2 seconds of ordering the man to drop a knife 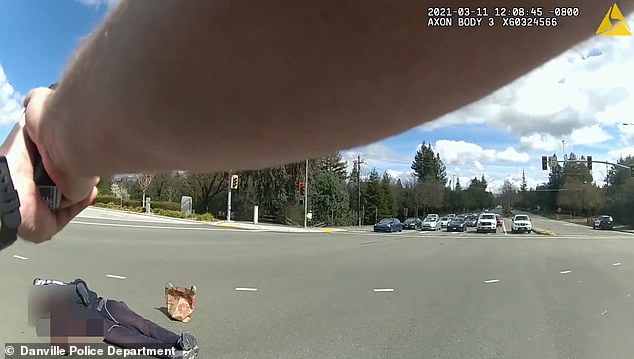 Wilson is seen lying on the ground in the middle of a busy intersection after being mortally wounded at the hands of Deputy Hall. The entire interaction between the cop and Wilson lasted 40 seconds

Activists said he was struggling with mental illness and relying on his father, Marvin Wilson, for financial support while living on the streets.

An attorney for Wilson’s family released another video Thursday taken by someone stopped at the intersection.

‘It doesn’t seem like he was doing anything,’ someone says. After Hall shoots Wilson, which can be clearly seen in the video, another person says, ‘Oh, my God. … This dude just got shot and killed, bro.’ 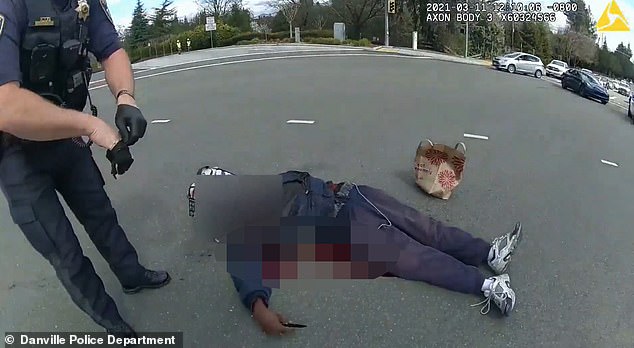 Attorney John Burris said Hall was unnecessarily aggressive toward Wilson, who was not causing any problems and was backing away from the deputy before he was shot without warning. 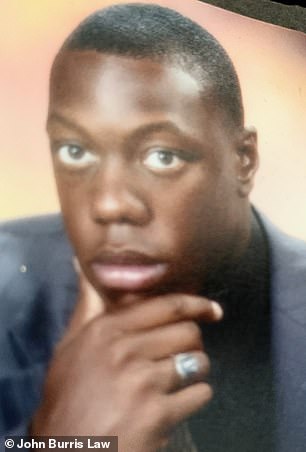 Wilson was described as a homeless man suffering from mental health problems. He died in the hospital a week after being shot by Hall

‘This is a homeless man, he´s walking away, minding his own business. He’s basically saying go away, leave me alone,’ Burris said. ‘You felt compelled to kill him.’

‘He did threaten Officer Hall,’ Livingston said. ‘And he did start advancing toward Officer Hall in the middle of a major intersection. Officers are forced to make split-second decisions to protect themselves and the public, and that´s what happened here.’

Hall worked for the Contra Costa County Sheriff’s Office, which was contracted by the city of Danville to provide policing services.

Prosecutors have faced intensifying outcry after Wilson’s death, with critics saying they took too long to make a decision in the 2018 killing that Hall carried out. The deputy shot 33-year-old Laudemar Arboleda nine times during a slow-moving car chase. 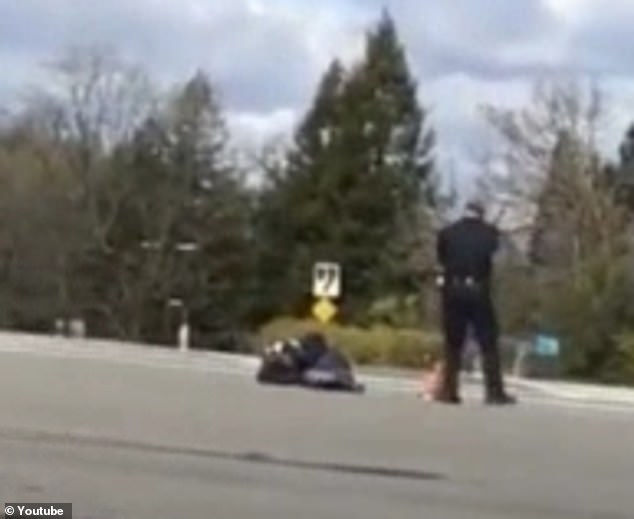 Burris, who also is representing Arboleda’s family, said that if prosecutors had acted more quickly in the Arboleda case, Wilson might still be alive. Burris said both men were mentally ill.

‘Officer Hall used unreasonable and unnecessary force when he responded to the in-progress traffic pursuit involving Laudemer Arboleda, endangering not only Mr. Arboleda’s life but the lives of his fellow officers and citizens in the immediate area,’ District Attorney Diana Becton said in a news release. 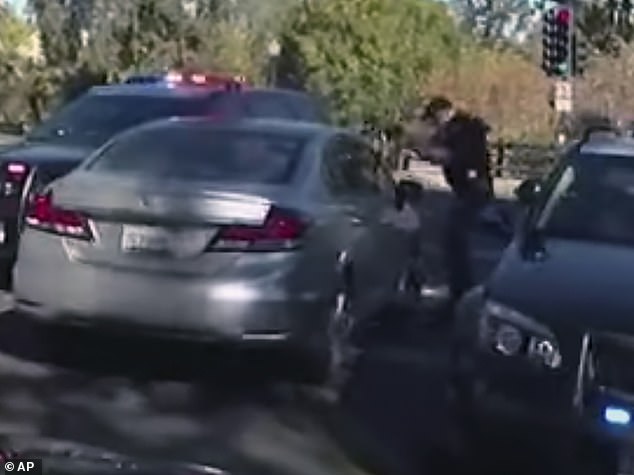 This image from body-worn camera video provided by the Contra Costa Sheriff shows Hall with his gun pointed into a car driven by Laudemar Arboleda on  November 3, 2018, in Danville 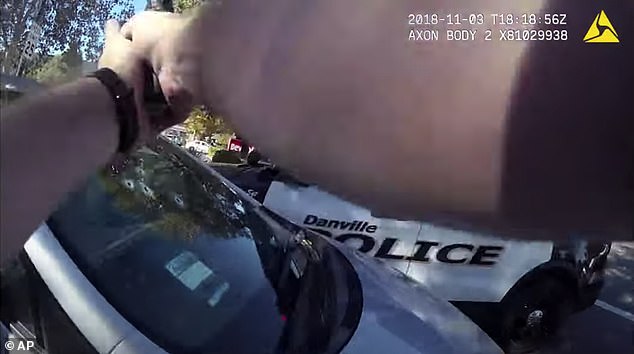 Hall opened fire on Arboleda’s sedan after a pursuit and kept shooting, striking him nine times 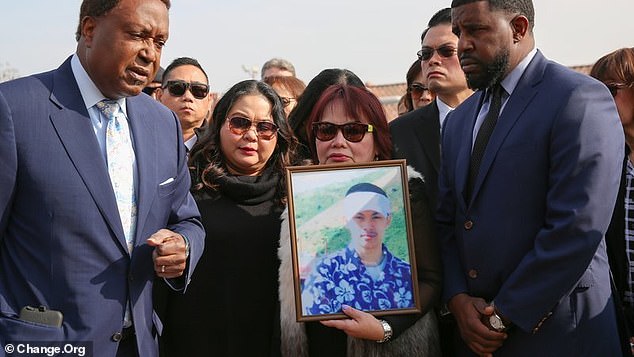 Hall shot and killed Laudemer Arboleda, 33 (pictured in a photo), in November 2018 in Danville

Hall’s attorney, Harry Stern, said prosecutors previously deemed the deputy’s use of force in the 2018 case justified, ‘given the fact that he was defending himself from a lethal threat. The timing of their sudden reversal in deciding to file charges seems suspect and overtly political.’

Deputies slowly pursued Arboleda through the city of Danville after someone reported a suspicious person in November 2018. Sheriff’s department video shows Hall stopping his patrol car, getting out and running toward the sedan driven by Arboleda. Hall opened fire and kept shooting as Arboleda’s car passed by, striking him nine times.

Hall testified at an inquest that he was afraid Arboleda would run him over.

The district attorney’s office says Wilson’s shooting is being investigated.