Biden tells the Taliban he will stick to Aug 31st withdrawal deadline IF they allow free access to Kabul airport – hours AFTER extremists start sealing it off, trapping thousands of Westerners and allies still desperate to get out

President Joe Biden told the Taliban on Tuesday that U.S. would stick to its promise to lead Kabul by Aug. 31 if it stuck to its agreement to allow Westerners and vulnerable Afghans free passage to the airport.

The U.S. has ramped up its airlift in recent days amid fresh reports of human rights abuses that will fuel fears for the fate of people who worked with American troops.

Adding to the sense of urgency, the country’s new Taliban rulers said that all evacuations must be completed by the end of the month and announced a ban on Afghans traveling to the airport.

Biden said the U.S. was ‘on pace’ to complete its mission by Aug. 31 but said he had asked officials to draw up contingency plans if U.S. troops had to stay longer.

‘Each day of operations brings added risk to our troops, but the completion by the 31st depends upon the Taliban continuing to cooperate, allow access to the airport for those who are transporting out and no disruptions to our operations.

‘In addition, I’ve asked the Pentagon and the State Department for contingency plans to adjust the timetable, should that become necessary.

‘I’m determined to ensure that we complete our mission.’

Witnesses said the Taliban blocked roads to the airport and fired in the air to disperse crowds. And Politico reported that American citizens were turned away from the airport.

The Biden administration is under intense pressure to wrap up a chaotic evacuation without leaving Americans or Afghans with visas behind. The president’s hurried withdrawal has drawn criticism from all sides: Republicans, Democrats, foreign policy hawks, humanitarian group sand international allies, who said they felt blindsided.

He had been due to deliver the update at midday but – in a sign of a White House trying to keep abreast of a fast moving scene in Kabul – he did not begin his remarks until after 5pm.

He began with the good news, welcoming a vote in the House to pass his huge $3.5 trillion spending plan.

But after offering an update on progress in Kabul he walked out the Roosevelt Room without responding to journalists’ shouted questions. 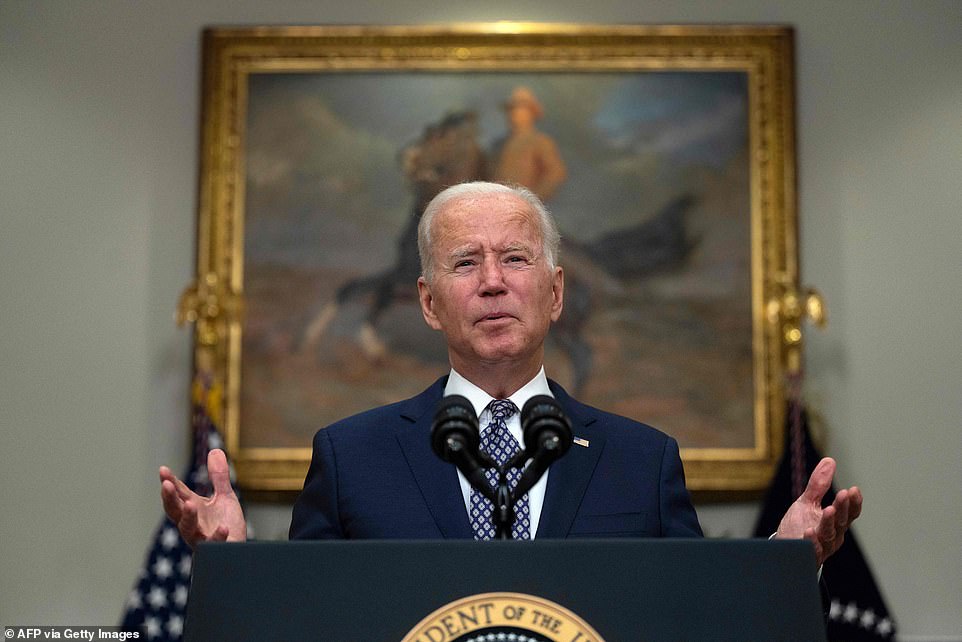 Biden said U.S. troops were ‘on pace’ to leave by August 31 so long as the Taliban kept its word to allow Afghans and Westerners to reach Kabul airport 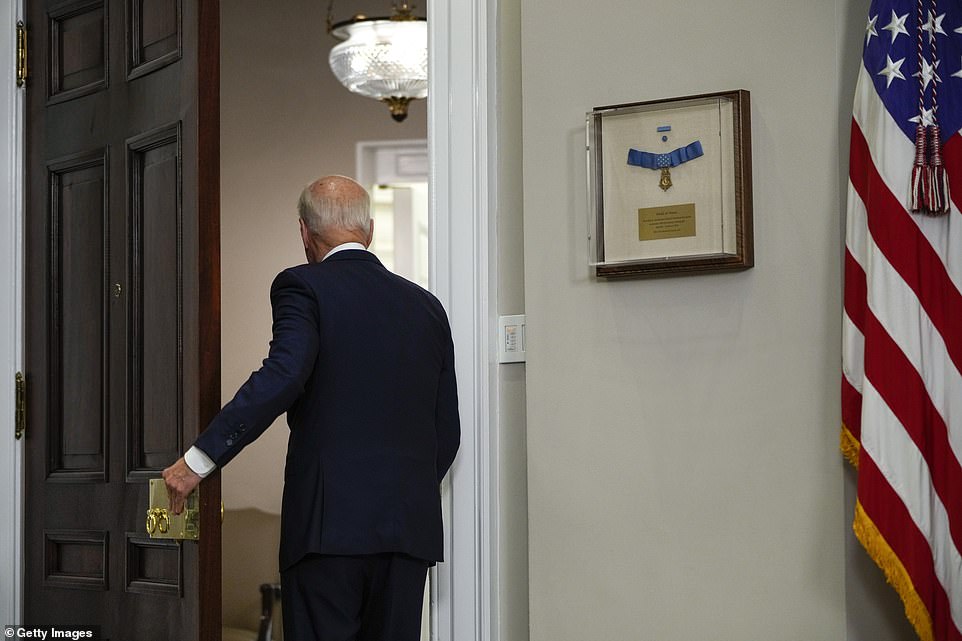 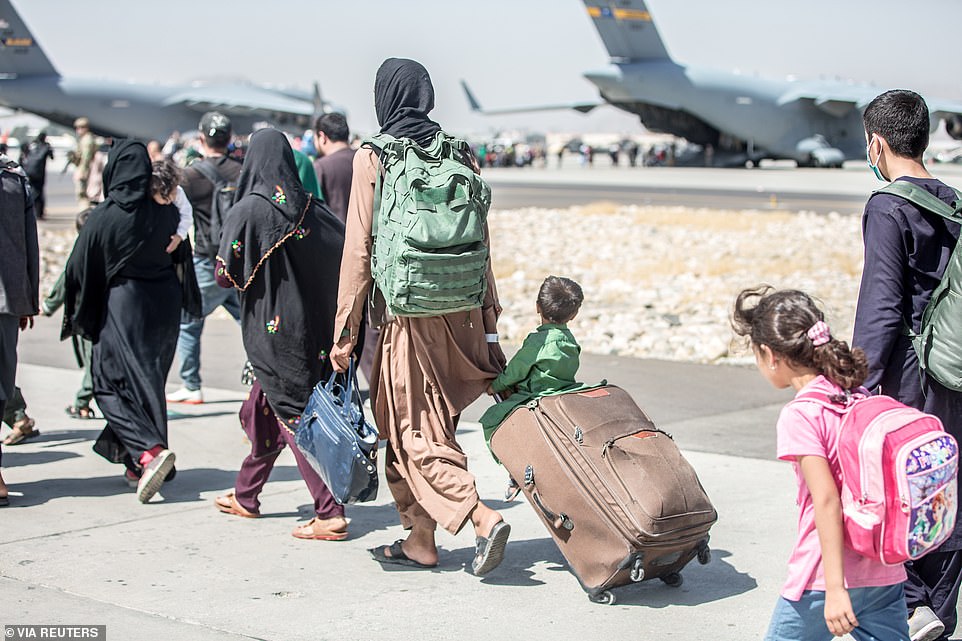 Thousands of people are making their way through Hamid Karzai International Airport as the U.S. and an international coalition rescues foreign nationals and their Afghan allies as the clock ticks down to Biden’s August 31 deadline 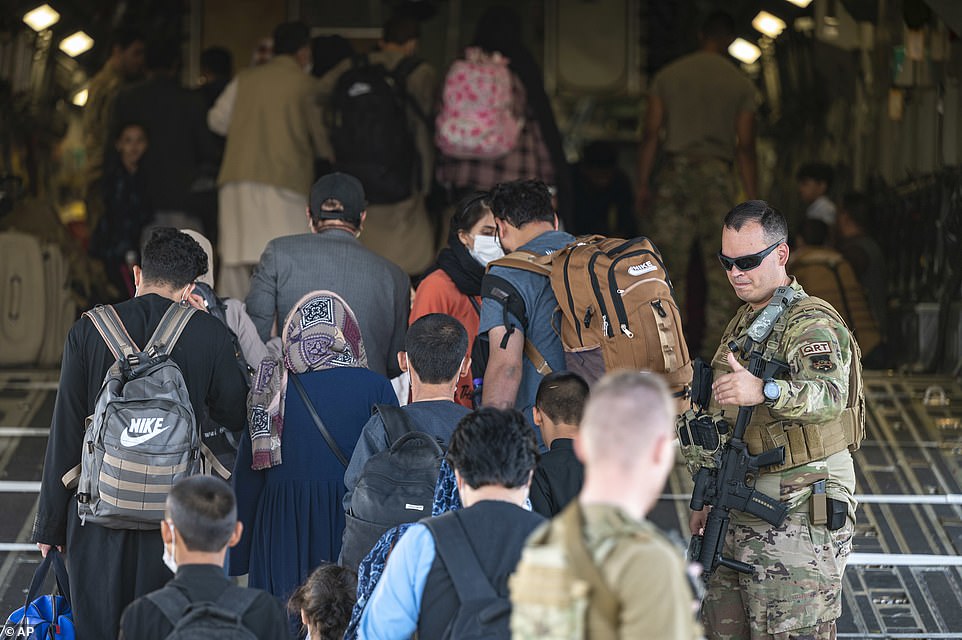 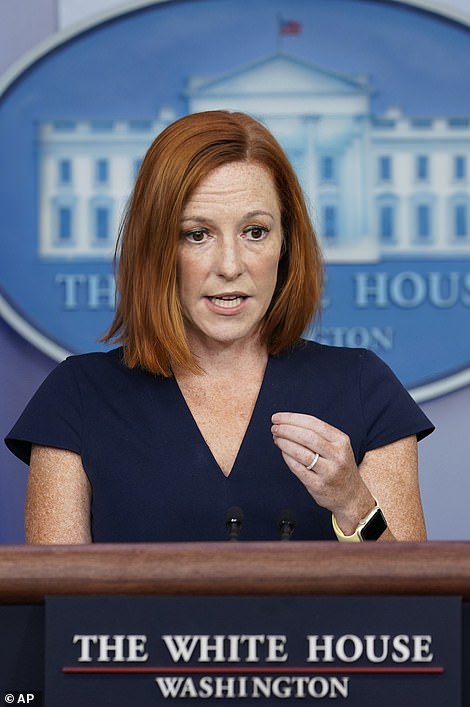 Earlier he spoke with leaders of the G7 major industrialized nations – Britain, Canada, France, Germany, Italy, and Japan – telling them that completing the operation depended on continued cooperation with the Taliban.

Biden said they agreed that the Taliban must be made to keep its word not allowing terrorist safe havens.

‘We agreed the legitimacy of any future government depends on the approach it now takes to upholding their international obligations including to prevent Afghanistan from being used as a base for terrorism and we agreed that none of us are going to take the Taliban’s word for it,’ he said.

‘We will judge them by their actions and stay in close co-ordination on any steps that we take moving forward in response to the Taliban’s behavior.’

He said the leaders also committed to help the thousands of people fleeing, taking a potshot at former President Trump as he did so.

‘The United States will do our part and we are already working closely with refugee organisations to rebuild a system that was purposely destroyed by my predecessor,’ he said.

Even before the president confirmed his timetable it emerged that the  U.S. had already begun reducing the military presence at the airport.

A diplomatic source in Washington said allies had been warned to expect that U.S. forces would begin their ‘retrograde’ from Hamid Karzai Airport on Tuesday in order to be out by the end of the month.

Former President Trump continued his withering criticism of Biden’s handling of the withdrawal.

‘How dare Biden force our military to run off the battlefield in Afghanistan and desert what now have become many thousands of American hostages,’ he said in an emailed statement.

‘We had Afghanistan and Kabul in perfect control with just 2,500 soldiers and he destroyed it when it was demanded that they flee.’

The US ramped up the airlift by evacuating 21,600 people in the past 24 hours, but they still don’t know the exact number that need to be rescued – and now time is rapidly running out.

British Prime Minister Boris Johnson, French President Emmanuel Macron and German Chancellor Angela Merkel were among the leaders who urged Biden to keep boots on the ground longer during the Tuesday meeting. European leaders are worried there is not enough time to evacuate everyone who wants out.

Biden spoke for seven minutes during the virtual meeting, according to officials.

Afterwards, Merkel said it was clear that the evacuation could not continue if it was not supported by the U.S.

And Johnson said the leaders discussed how to ensure people could continue to flee after American troops departed.

‘The number one condition that we are insisting upon is safe passage beyond the 31st, beyond this initial phase, for those who want to leave Afghanistan,’ he said.

Biden’s long delayed appearance after the virtual meeting (and a postponed Pentagon briefing) all suggested a frantic atmosphere behind the scenes as aides and advisers juggled logistics and coordinated with the Pentagon and State Department after Taliban spokesperson Zabihullah Mujahid refused to extend the troop deadline despite secret talks with CIA Director Bill Burns.

‘They are capable of evacuating their citizens and troops by August 31’, the defiant Taliban spokesman said. ‘All people should be removed prior to that date. After that we do not allow them. We will take a different stance. 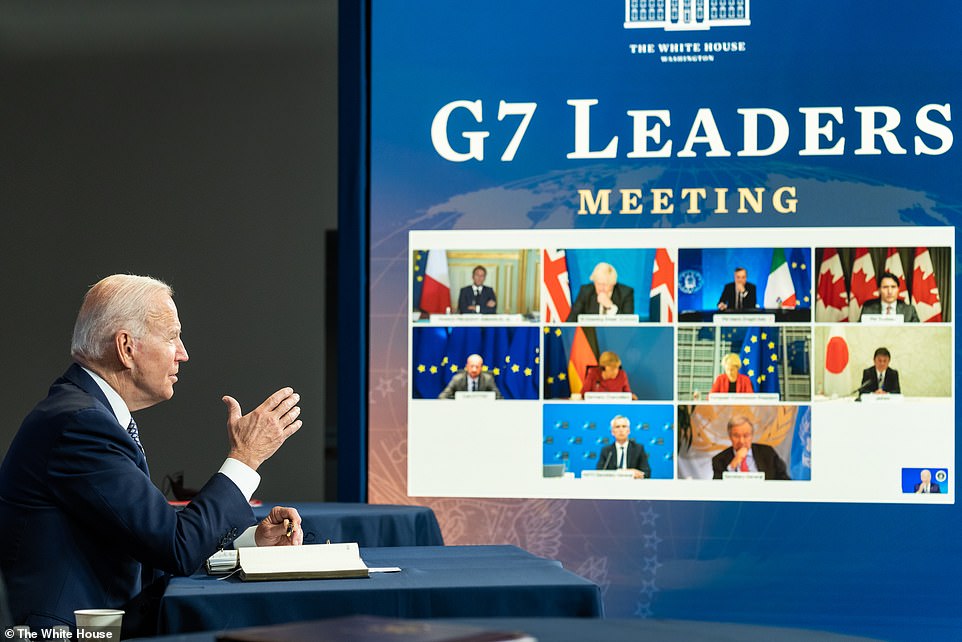 President Joe Biden will stick to his August 31 deadline to withdraw U.S. troops from Afghanistan despite pressures from G7 leaders to extend it 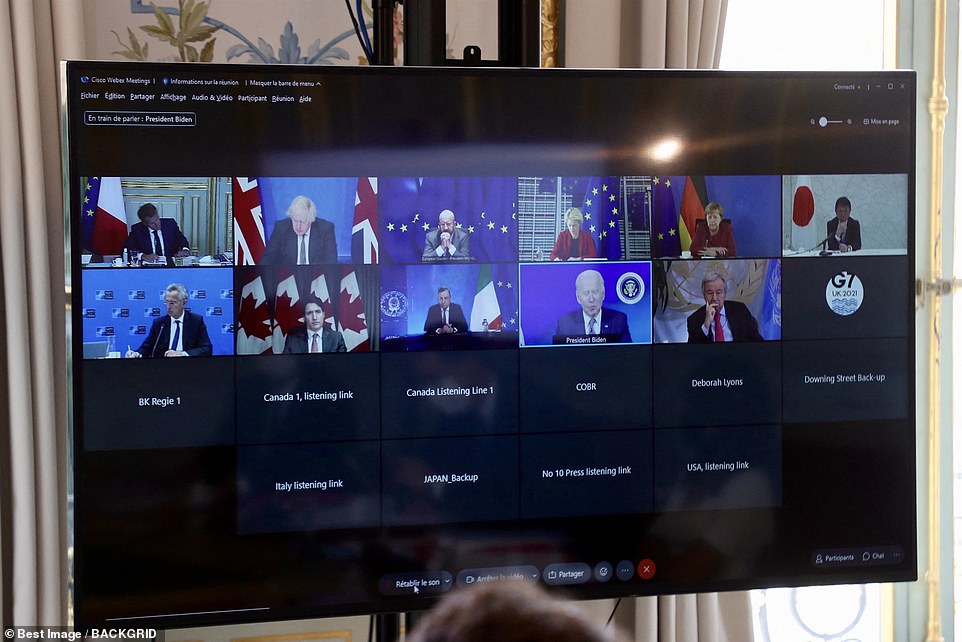 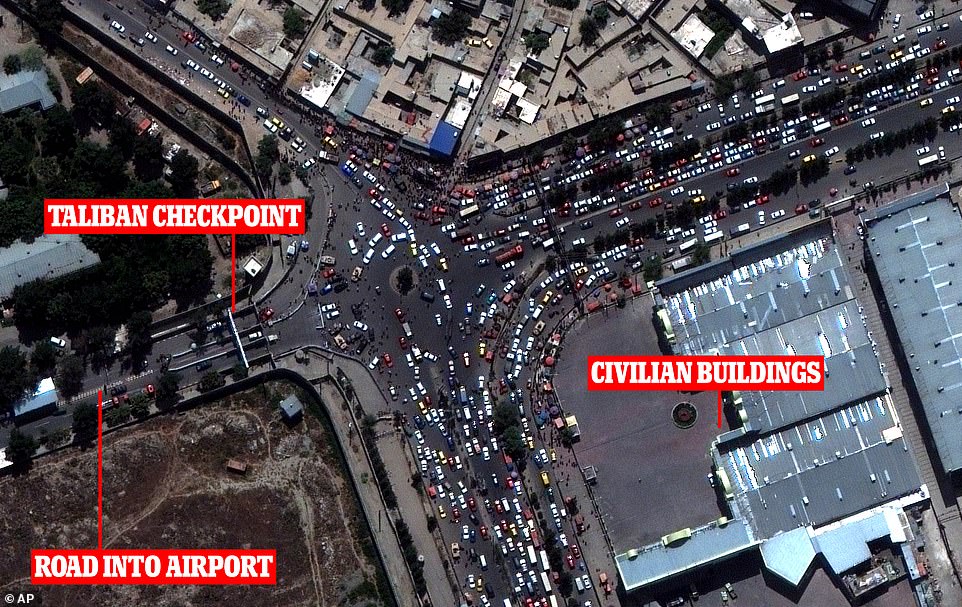 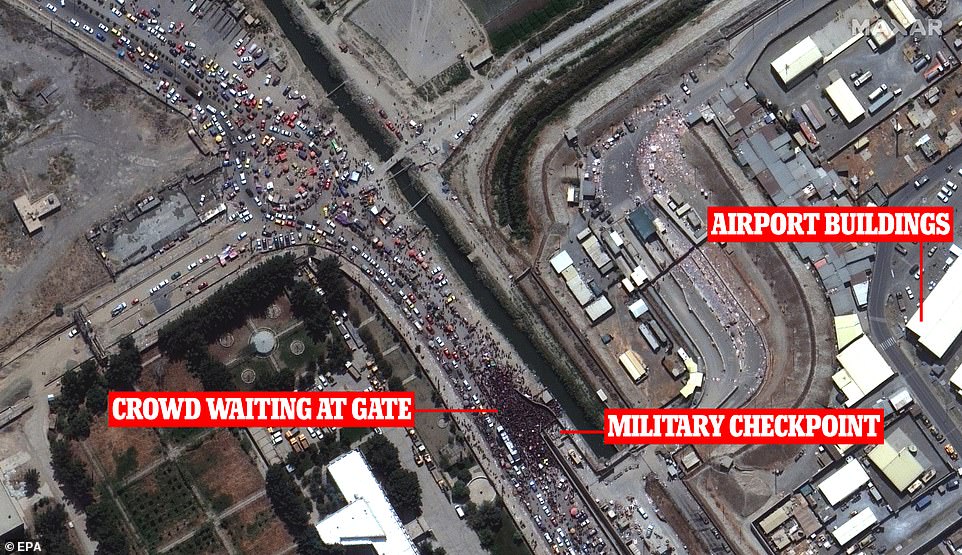 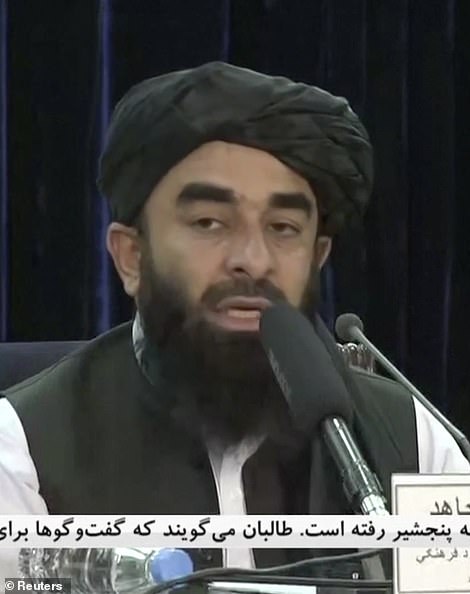 Taliban spokesperson Zabihullah Mujahid said Tuesday the group will not extend the August 31 deadline for all U.S. troops to withdraw from Afghanistan

He also said the road to the airport had been closed and that Afghans should not try to leave the country.

‘The road to Kabul airport is closed for locals and open to foreigners,’ said Mujahid.

‘I think that’s safe to say what I’m talking about is the individuals we have prioritised, those who have fought alongside us, who are eligible for some special immigrant visas, otherwise wise we are facilitating their departure and that our expectation is that they will be able to reach the airport,’ she said.

Meanwhile officials tried to address concerns that the evacuees could include terror suspects of people with COVID-19.

They said they were doing their best to screen evacuees before they ever set foot inside the U.S. but the first step is getting people of Afghanistan.

All evacuees are being tested on arrival in the U.S. for COVID-19, according to a senior administration official.

‘We’re also in the process of figuring out exactly how and when we’ll offer vaccination to those arriving from Afghanistan and obviously the goal is to get that process finalized and up and running as quickly as possible, and we expect exactly that,’ the official added.

They also undergo security screening at transport hubs outside the country before boarding flights to the U.S.

‘That process involves biometric and biographic security screenings, conducted by our intelligence, law enforcement and counter terrorist professionals who are working quite literally around the clock to vet all of these Afghans before they’re allowed into the United States,’ he said.

Even so, the Taliban warning sent fresh panic around Kabul on Tuesday.

It suggested CIA Director William Burns had failed in his mission to extend the timetable after flying into Kabul on Monday for a secret meeting with Taliban leader Abdul Ghani Baradar, according to The Washington Post.

Burns was dispatched to Afghanistan as the administration continues to grapple with a chaotic scene at the airport and struggles to evacuate Americans from Kabul.

Baradar is now playing the role of the Taliban’s counterpart to Burns 11 years after he was arrested in a joint CIA-Pakistani operation, which put him in prison for eight years.

Washington pulled off its biggest haul of evacuations since the crisis started over the last 24 hours to early Tuesday morning, with 37 military jets evacuating 21,600 people from Kabul, the White House announced.

But they still don’t know the number of American citizens and Afghan allies stranded on the ground that need evacuating.

‘Since August 14, the U.S. has evacuated and facilitated the evacuation of approximately 58,700 people. Since the end of July, we have re-located approximately 63,900 people,’ a White House official said. 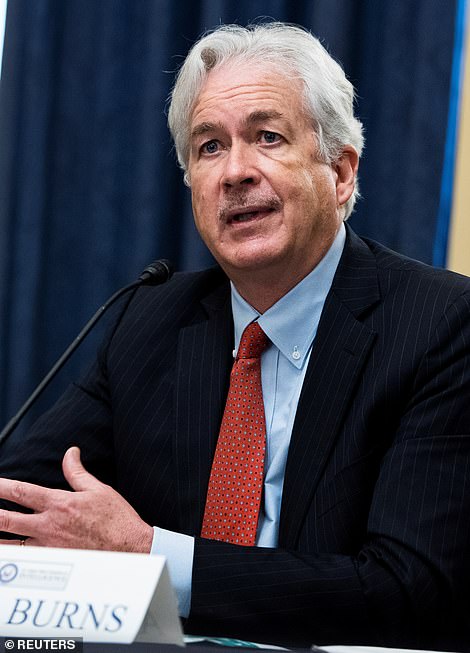 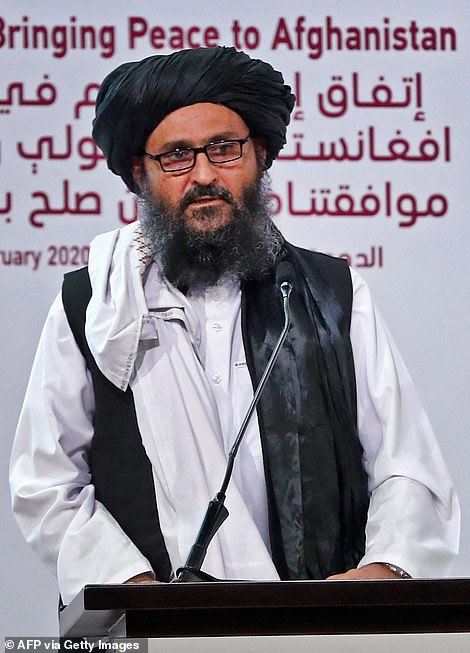 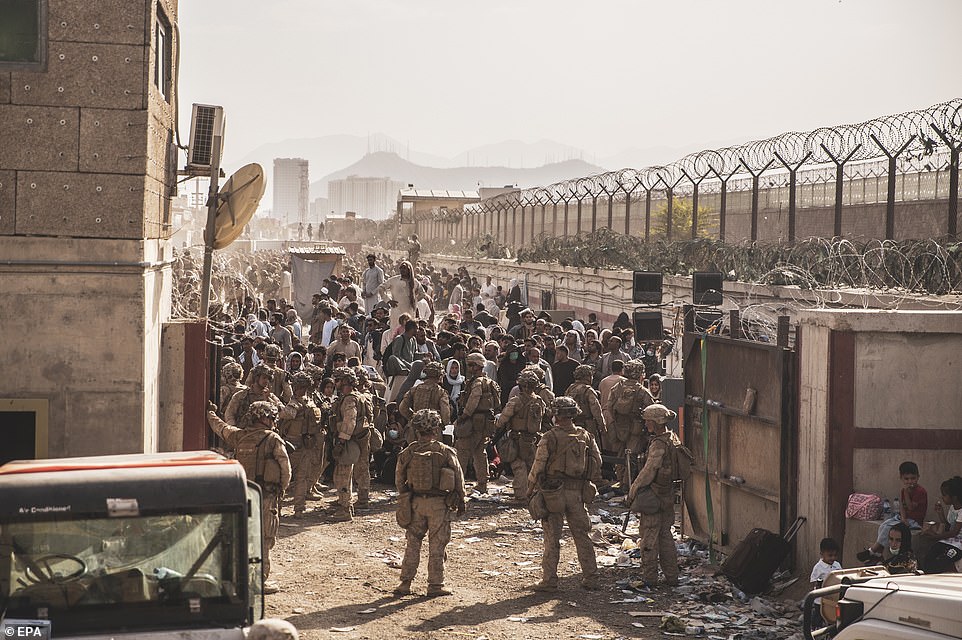 Likely discussed at the meeting Monday was the August 31 deadline for total troop withdrawal from Afghanistan. U.S. soldiers guard Kabul airport on Tuesday as thousands of desperate Afghans crowd at the gates in the hopes of fleeing the Taliban 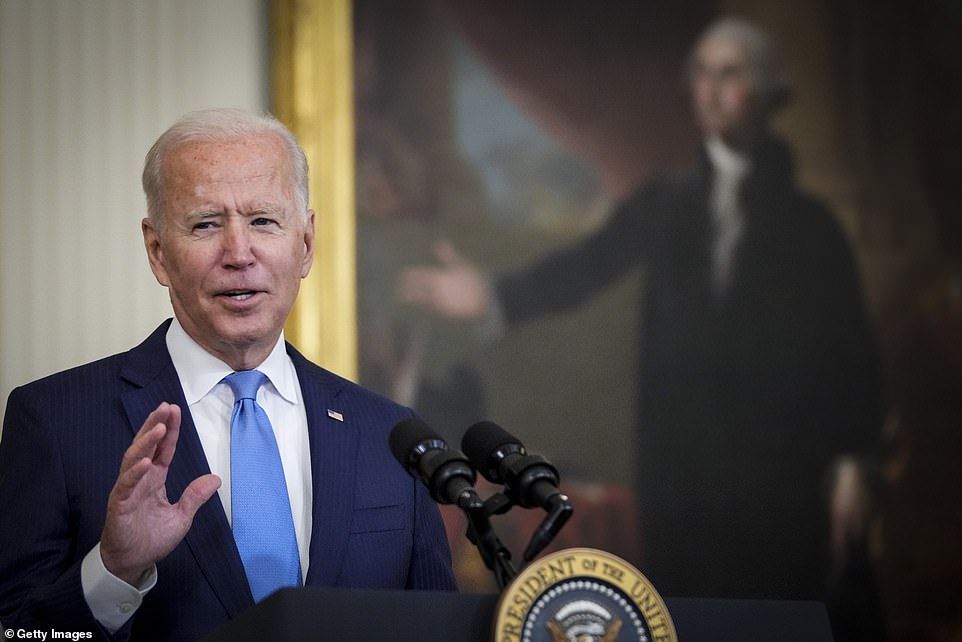 President Joe Biden said U.S. military would stay in Kabul past the deadline if needed to continue evacuating Americans stranded in Afghanistan 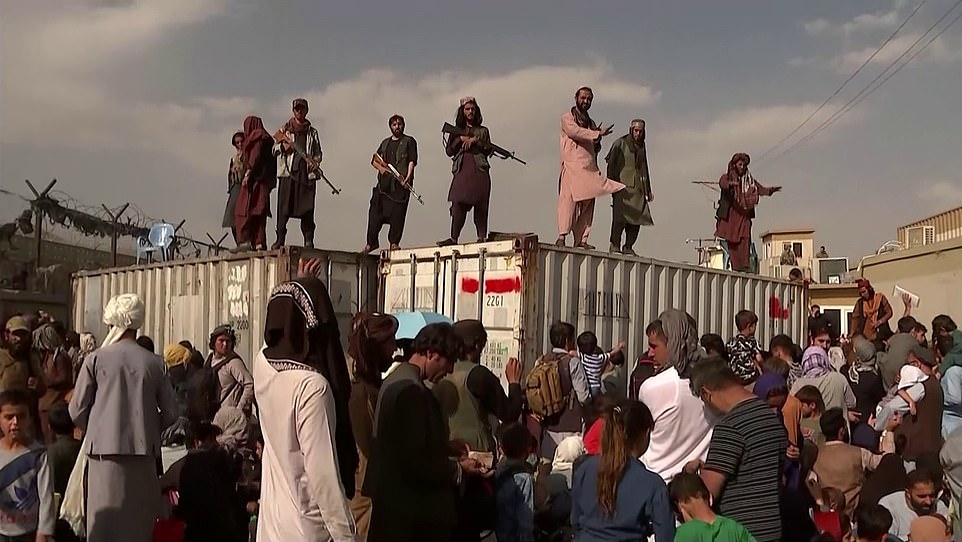 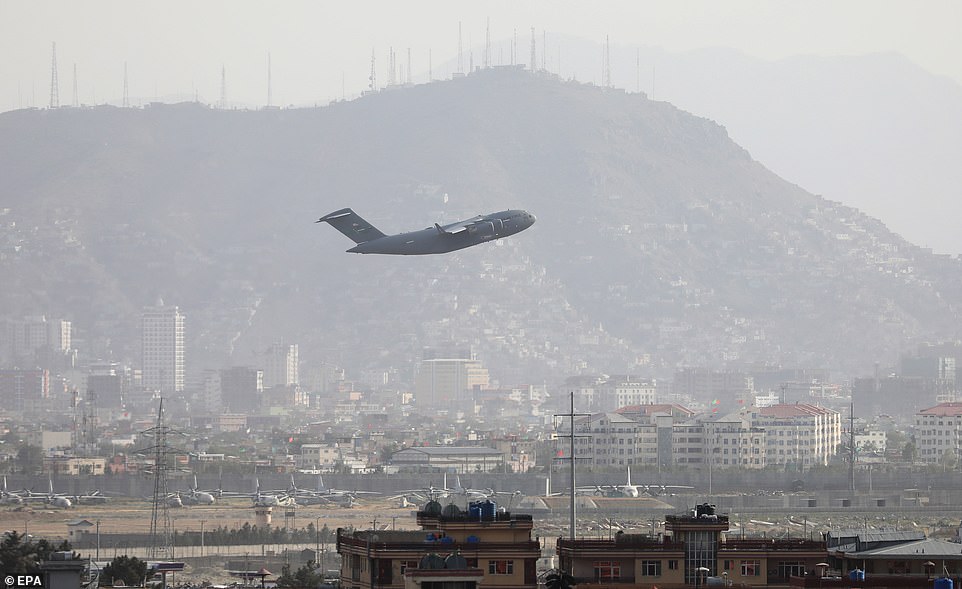 From Sunday to early Monday morning, 28 military jets rescued around 10,400 people. The latest numbers reveal that over half of the total evacuations from Afghanistan have taken place in the last two days.

Pentagon spokesperson John Kirby said in a briefing: ‘There’s been no change to the timeline of the mission which is to have this completed by the end of the month.’

‘We continue to make progress every day in getting Americans, as well as SIV applicants and vulnerable Afghans out.’

He said that the increased flow meant that the U.S. had the capability to get everyone out by the end of the months.

The president is still hesitant, however, to deploy troops outside the Kabul airport because he doesn’t want a Black Hawk Down-style incident, he told commanders last week, referring to a botched mission in Somali when 18 Americans were killed in 1993.

Suhail Shaheen, a member of the Taliban delegation in Qatar’s capital city Doha said Monday U.S. military continuing to evacuate past this month would amount to ‘extending occupation’ and that is ‘a red line’.

‘If the US or UK were to seek additional time to continue evacuations – the answer is no. Or there would be consequences,’ he told Sky News in an interview. ‘

‘It will create mistrust between us,’ Shaheen continued. ‘If they are intent on continuing the occupation it will provoke a reaction.’

Rescue efforts became increasingly urgent on Tuesday as Spain warned it would have to leave people behind and France said it would stop airlifts on Thursday – five days before the deadline.

The airport has become a relative safe haven but accessing it has proven near impossible due to Taliban checkpoints and chaos among the crowds outside the perimeter.

While Biden and his administration have said the Taliban has promised safe passage to the airport for American citizens, there are reports that Americans are being assaulted as they try to reach Hamid Karzai International.