The Biden administration plans to restore environmental protections to Tongass National Forest in Alaska, one of the world’s largest intact temperate rain forests, that had been stripped away by former President Donald J. Trump.

The administration intends to “repeal or replace” a Trump-era rule which opened about nine million acres, or more than half of the forest, to logging and road construction, according to a White House document published on Friday.

The Tongass, in southeastern Alaska, is home to more than 400 species of wildlife, fish and shellfish, including nesting bald eagles, moose and the world’s highest concentration of black bears. Among its snowy peaks, fijords and rushing rivers are stands of red and yellow cedar and Western hemlock as well as Sitka spruce trees at least 800 years old.

The forest also plays a key role in combating climate change. One of the world’s largest carbon sinks, its trees and soil absorb and store millions of tons of carbon dioxide that would otherwise be released into the atmosphere, where it would trap heat and add to global warming.

The national forest had been protected from logging, mining and other development since 2001 by a policy known as the roadless rule, which prevented road building necessary for those other activities.

But last year, Mr. Trump lifted the rule for a large section of Tongass, pleasing Alaskan lawmakers who had lobbied for the change for years. The move was assailed by environmentalists and the majority of commenters who formally registered opinions with the government.

“U.S.D.A. recognizes the Trump Administration’s decision on the Alaska roadless rule was controversial and did not align with the overwhelming majority of public opinion across the country and among Alaskans,” said Matt Herrick, a spokesman for the United States Agriculture Department, the parent agency of the Forest Service. “We recognize the vital role the forest and its inventoried roadless areas play in communities, and in the economy and culture of southeast Alaska, as well as for climate resilience. Future decisions about the role of the Tongass National Forest should continue to reflect the best interests of Alaskans and the country as a whole.”

The administration will formally publish its intent to revise the rule by August, with the details of the final plan expected within the following two years. 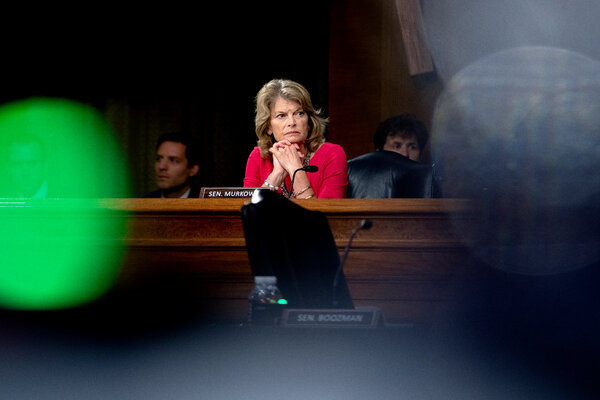 Alaskan senators and governors have long maintained that lifting the roadless rule protections in their state would provide a sorely needed economic boost.

Among them is Senator Lisa Murkowski, a Republican, who has argued in the past that sections of Tongass can be responsibly developed in ways that would not necessarily lead to the loss of major swaths of forest. She has attacked the roadless rule as a “one-size-fits-all” regulation that hurts the timber industry as well as mining, transportation and energy.

It is not clear whether the Biden administration intends to fully replace the roadless rule protections in the Tongass or whether it would replace protections in some areas while leaving others open to economic development.

Ms. Murkowski is also a key player in efforts to negotiate a bipartisan agreement on a sweeping infrastructure bill and the White House has been careful to avoid antagonizing her. Already this year, Mr. Biden — seeking to strike a balance between his vows to fight climate change and protect the environment, while also securing the support of Ms. Murkowski for a signature legislative effort — has alternated between policies that approve fossil fuel drilling in some parts of Alaska while banning it in others.

“Any action to repeal the final rule and reimpose the roadless rule will cost jobs, diminish income, keep energy prices high, and cripple the ability of the communities in the region to develop a sustainable, year-round economy,” Ms. Murkowski said in a statement. “The Trump administration, through the Forest Service and USDA, put considerable work and effort into the final rule and now the Biden administration is literally throwing it all away. We need to end this ‘yo-yo effect’ as the lives of Alaskans who live and work in the Tongass are upended every time we have a new president. This has to end.”

Mike Dunleavy, the Republican governor of Alaska, wrote on Twitter, “Disappointed in the @POTUS latest suppression of AK economic opportunity. From tourism to timber, Alaska’s great Tongass National Forest holds much opportunity for Alaskans but the federal government wishes to see Alaskans suffer at the lack of jobs and prosperity.”

“We will use every tool available to push back on the latest imposition,” he added.

“We applaud this first step in what we hope will be a swift process to restore full roadless rule protections to the Tongass National Forest,” said Ellen Montgomery, director of public lands campaigns for Environment America. “The Trump administration’s rollbacks were an attack on the Tongass, which is a priceless treasure and a beacon of nature. Many trees in the Tongass are older than United States, and we must keep them standing tall because the forest serves as a vital bulwark against climate change. It also provides an irreplaceable home for our wildlife.”

Several climate scientists, working together with a group called the Tongass Coalition, have asked the Biden administration to create a strategic national carbon reserve by placing permanent federal protections on all large trees and mature forests on federal lands. They have noted that such a proposal could also help Mr. Biden meet his goal of conserving 30 percent of public lands by 2030.

“In order for us to slow down runaway climate chaos, we need to do two things: get off fossil fuels as quickly as possible, and to store atmospheric carbon,” said Dominick DellaSala, a scientist with the Earth Island Institute, a nonprofit environmental organization. “Forests are the best at that and Tongass is the champ. But this would have to come from the president. This is something he could do to move the needle on climate change quickly.”

In a series of recent decisions involving mining, drilling and development in Alaska, Mr. Biden has straddled a line between conservation and development.

Last month, the interior secretary, Deb Haaland, called Ms. Murkowski and the rest of Alaska’s congressional delegation to inform them she would approve of a multibillion dollar ConocoPhillips oil drilling project in the National Petroleum Reserve in Alaska. The project, which Ms. Haaland opposed when she served in Congress, is expected to produce more than 100,000 barrels of oil a day for 30 years, locking in decades of new fossil fuel development and winning praise from Alaskan lawmakers.