Anti-hunting activists have branded TV rat catcher Ricky Clark as a ‘serial killer’ in a campaign supporting a proposed bill that could ban the importation of body parts from animals hunted overseas.

The Campaign to Ban Trophy Hunting has placed adverts outside Parliament and railway stations saying Clark, 46, is ‘one of Britain’s most prolific serial killers’ and is ‘still at large.’

An undercover investigation revealed the hunter – who starred in the BBC One programme The Rat Pack – has completed 20 safaris in at least 11 African countries and has over 100 kills, The Times reported.

He also has a trophy room stuffed with more than 50 of his kills which include a wide range of species such as lion, hippo, leopards and more.

Clark’s hunting hobby is completely legal, but the importation of animal bodies could soon be banned under the proposed law. MPs are expected to start debating the legislation tomorrow. 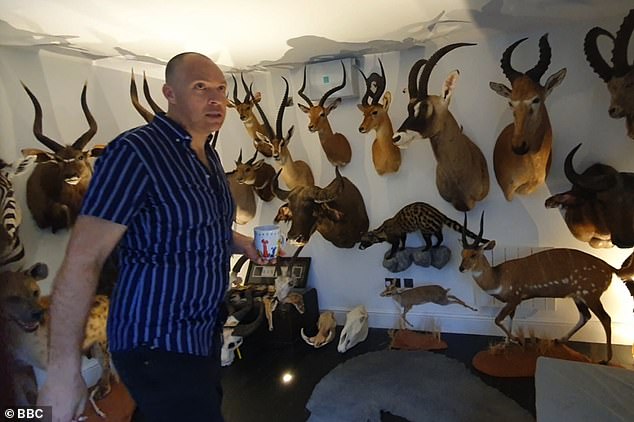 Clark has hunted all over the globe, including in Africa, Kyrgyzstan, Canada, Hungary, Finland, Spain, France and the Czech Republic.

He reportedly told an undercover investigator from the Campaign to Ban Trophy Hunting that he had shot two leopards, which the group claims are threatened with extinction.

‘I shot one in self defence at eight yards. I shot him in the nose,’ Mr Clark recalled of a trip to Namibia, according to The Times.

‘I was hunting something else and he came for me.’

He hunted the second leopard on a later safari in Zambia. During that trip he reportedly also shot a hippo to use a bait.

‘Four baits got hit by big toms so it was a choice of what tom I wanted to shoot,’ he explained.

Mr Clark said he and his team built a hunters’ hideaway and then he shot the leopard ‘out of the tree’ on the first night of the trip.

He recalled: ‘That was an incredible experience. I shot buffalo, big bushbuck, a civet cat, a leopard and a hyena and some impala and some other s**t.’ 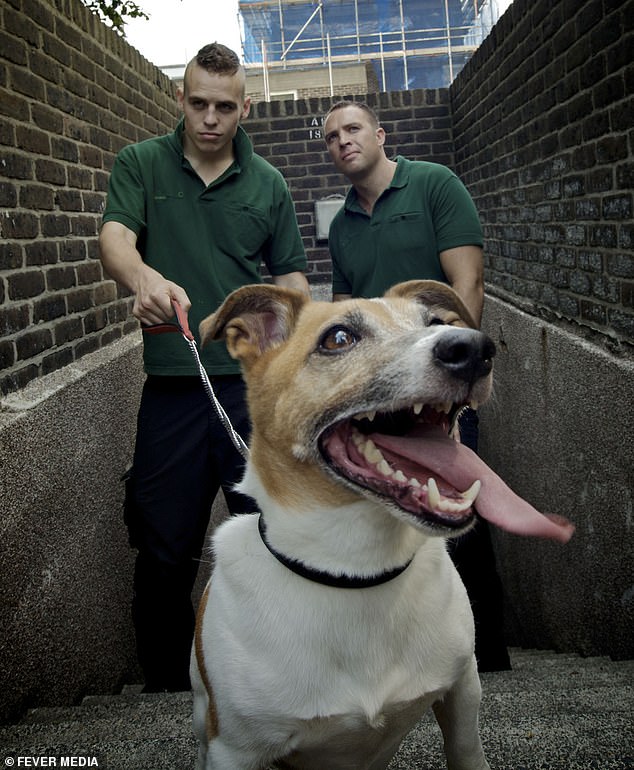 An undercover investigation revealed that Mr Clark – who starred in the BBC One programme The Rat Pack – has completed 20 safaris in at least 11 African countries and has over 100 kills. He is pictured with his brother Jimmy on The Rat Pack 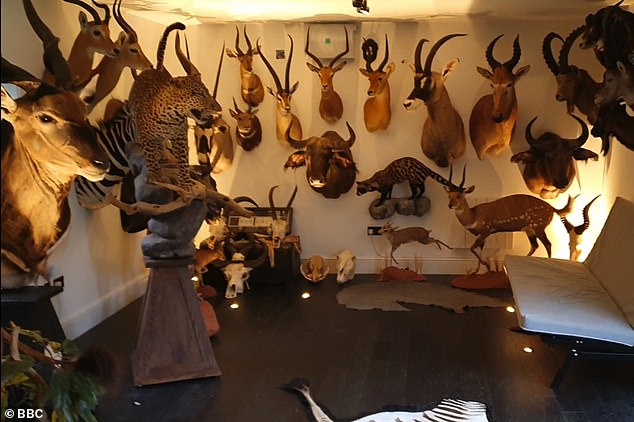 Mr Clark has a trophy room stuffed with more than 50 of his kills which include a wide range of species such as lion, hippo, leopards and more

Eduardo Goncalves, founder of the Campaign to Ban Trophy Hunting, told MailOnline today that Mr Clark ‘has one of the largest personal collections of hunting trophies in Britain.’

Mr Goncalves alleged that the rat catcher ‘even had to build a new extension to his home to house them all.’

‘Like a number of other British trophy hunters, he has killed so many animals that he meets the FBI’s definition of ‘serial killer,’ the activist said.

‘Ricky Clark has shot lions, elephants, hippos, leopards, zebras, hyenas and many many more. Cutting off the feet of an elephant that he’s shot for fun and turning them into umbrella stands is just sick.’

MailOnline has approached Mr Clark and BBC for comment.

Mr Clark is one of television’s most loved hunters. The Rat Pack, which showcased how his urban pest control business used dogs to remove rodents from homes, received ‘favourable’ reviews when it launched in 2009.

The programme was broadcast across the UK and on TV stations as far away as Australia.

The hunter also has a popular YouTube channel with videos of his pest control successes. One clip, featuring his plummer terrier Kimber killing a large rat, has viewed more than five millions times.

He also appeared on popular American TV network CNN in a report about the ‘working life’ of a rat-catcher.

Additionally, Mr Clark claims to be a member of the exclusive hunting syndicate on the royal family’s Sandringham estate in Norfolk.

He reportedly said he joined the group after becoming acquainted with a gamekeeper in the area and that he ‘saw King Charles about three weeks ago.’

The hunter also alleged the troupe will ‘hunt around William’s house.’ 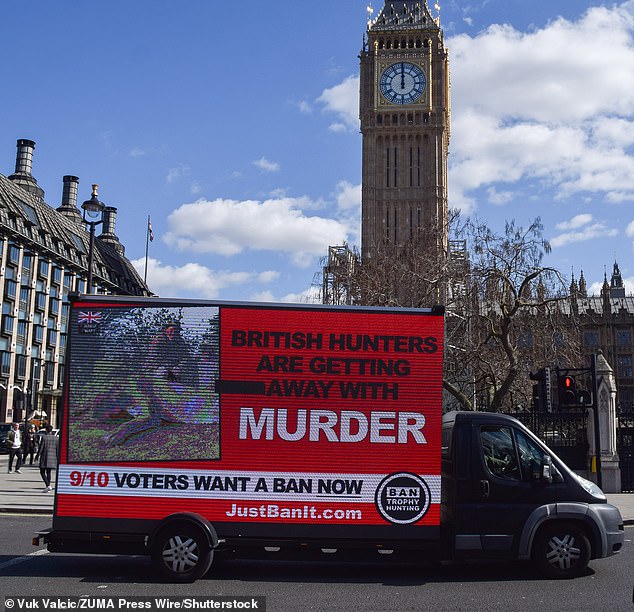 The Campaign to Ban Trophy Hunting has placed adverts outside Parliament and railway stations saying Clark, 46, is ‘one of Britain’s most prolific serial killers’ and is ‘still at large.’ Pictured: One of the group’s advertisements on a van outside the Houses of Parliament

Meantime, lawmakers will begin debating a bill that aims to ban the import of hunting trophies into Britain.

If it becomes law, the bill – tabled by Tory MP Henry Smith – would stop hunters bringing animal skins, severed heads and carcasses back to the UK after shoots abroad.

The Government has spent years promising a ban, but failed to offer a timetable.

But British trophy hunters have defended their involvement, saying it pours money back into the economy of the countries where they hunt.

But animal rights campaigners have continued to condemn the practice and have backed the Government’s campaign to ban imports.

Mr Goncalves, in a statement to MailOnline, argued that the bill is ‘long overdue.’

‘It is, of course, opposed by the powerful American gun lobby. MPs should ignore them and respect the views of the electorate instead and turn up to support the bill.’

Among those urging MPs to support the bill is explorer Sir Ranulph Fiennes, who previously called on leadership to ‘help put an end to this sick bloodsport’.