London: Prince William has made a plea for “togetherness” as the royal family put on a show of unity at an annual Christmas carols concert despite an extraordinary personal attack launched by his brother, Prince Harry.

The Prince of Wales spoke hours after the Duke of Sussex launched his most explicit and direct accusations about his brother, alleging in a Netflix documentary that he had broken a pledge never to let the “institution” come between them. 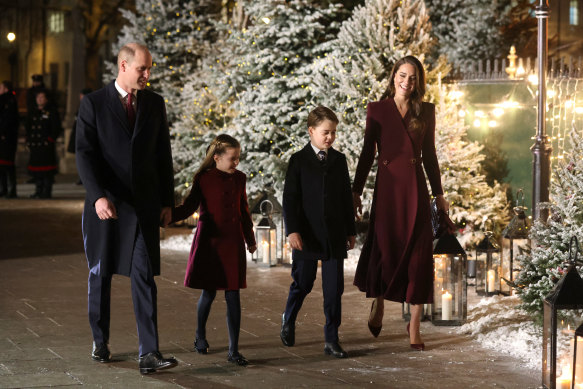 Prince William and his wife Catherine arrive with their children Princess Charlotte of Wales and Prince George of Wales arrive for the ‘Together at Christmas’ Carol Service.Credit:Getty

On Thursday evening, the King, Queen Consort, William and his wide Catherine, the Princess of Wales, and the wider family assembled at the Abbey in an outing intended to demonstrate their focus.

Prince George and Princess Charlotte joined their parents for the ‘Together at Christmas’ concert, dressed in festive burgundy outfits with their royal relatives.

The family was greeted by cheers from the public, including shouts of “Kate, we love you” and “Prince William, we love you”.

Kensington Palace said the carol service, which had been organised by Princess Catherine, was dedicated to the late Queen. 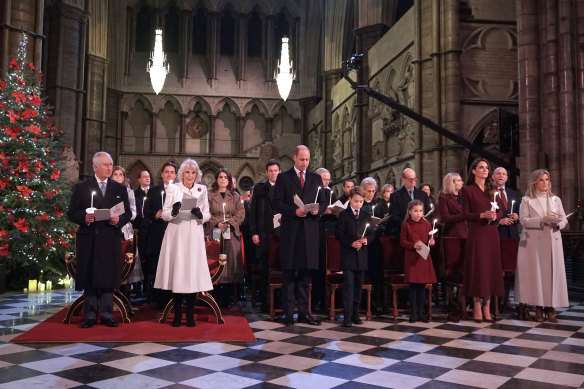 (From left) King Charles III, Camilla, Prince William, Princess Charlotte, Catherine, Princess of Wales and Sophie, Countess of Wessex during the ‘Together at Christmas’ Carol Service in London.Credit:Getty

During the service, William spoke of how Jesus “inspired people to commit themselves to the best interests of others” with a mission to “serve, not be served”.

Quoting from his late grandmother’s Christmas Speech from 2012, he said: “At Christmas, I am always struck by how the spirit of togetherness lies also at the heart of the Christmas story.”

The concert was held to recognise the “selfless efforts of individuals, families and communities across the UK, and celebrate and showcase the joy that human connection and togetherness can bring”. 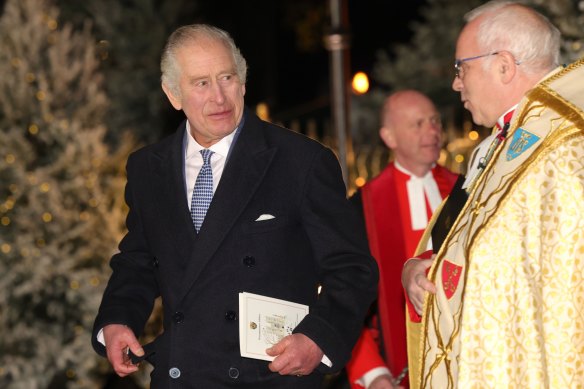 King Charles III departs after the ‘Together at Christmas’ Carol Service at Westminster Abbey in London, England.Credit:Getty

A Christmas tree in the abbey was decorated with small Paddington Bear decorations, a nod to the late Queen’s famous sketch at this year’s Jubilee celebrations, while guests were greeted with atmospheric snowflakes from a snow machine as they arrived at the entrance.

Among guests were the Countess of Wessex, the Duke and Duchess of Gloucester, the Duke of Kent, Princess Alexandra, Princess Beatrice and Eugenie and their husbands, Prince and Princess Michael of Kent, and Zara and Mike Tindall, as well as the Middleton family.

Other guests taking part in the service included Hugh Bonneville, the actor who starred in Paddington, and former Spice Girl Melanie C, the singer.

Harry’s personal war with the royal family and British media has likely accelerated after the release of the second instalment of the Netflix’s documentary Harry and Meghan, which contained a raft of explosive claims.

The documentary contained the revelation that William “shouted and screamed” in terrifying manner at Harry as they discussed his and Meghan’s plans for life outside of the royal family.

He said he and his wife would “never get genuine accountability or a genuine apology” for the way they were treated. 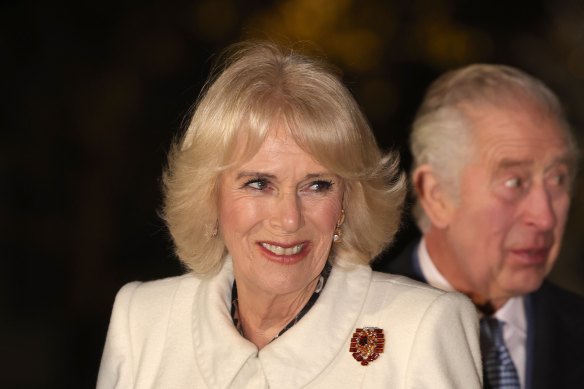 Harry claimed that his brother and father “were very much focused on the same misinterpretation of the whole situation”, even during “hard” conversations close to the Duke of Edinburgh’s funeral.

Buckingham Palace and Kensington Palace have declined to comment on the Sussexes’ Netflix documentary, Harry & Meghan.