Archie Battersbee’s mother releases video she claims proves her brain-damaged son, 12, is trying to breathe on his own as she prepares to fight judge’s ruling while his father recovers from ‘heart attack’ in hospital

Archie Battersbee’s father is ‘ok’ in hospital following a suspected heart attack yesterday shortly before Court of Appeal judges ruled his son could be disconnected from a ventilator, the family said today – as they revealed ‘new’ evidence they say proves the 12-year-old is still breathing.

Paul Battersbee, who is in his 50s, fell ill on his way to court yesterday morning before being taken to hospital. A family spokesman today said he had spent a night in hospital but was ‘OK now’ and should be released before the end of the day.

The family’s lawyers had begged Appeal judges to call off yesterday’s hearing but they went ahead with delivering their verdict – granting a 48-hour ‘stay’ on ending the boy’s treatment to give his parents time to appeal to the European Court of Human Rights.

Archie’s mother, Hollie Dance, insists Archie is able to breathe independently of a respirator, and today his legal team circulated a video which they want to submit as evidence.

The footage is of an emergency room monitor showing Archie’s respiratory rate – which is set by a ventilator. At the start of the footage this increases from 14 to 15 before a diagram of a pair of lungs flashes up – which is sometimes an indicator that a patient has initiated a breath.

Doctors treating Archie at the Royal London Hospital in Whitechapel, east London, say he is brain-stem dead and will not be able to wake up. They believe continued life-support treatment is not in his best interests. 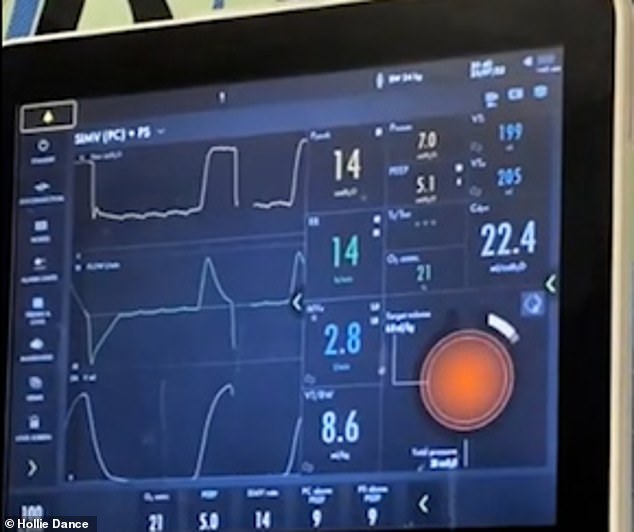 The footage is of an emergency room monitor showing Archie’s respiratory rate – which is set by a ventilator (large number in green, second from top). At the start of the footage this increases from 14 to 15 before a diagram of a pair of lungs flashes up – which is sometimes an indicator that a patient has initiated a breath 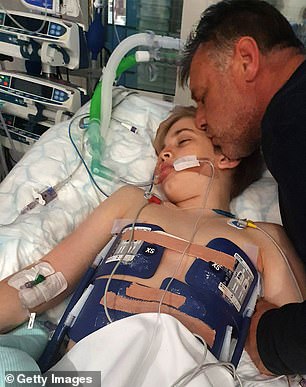 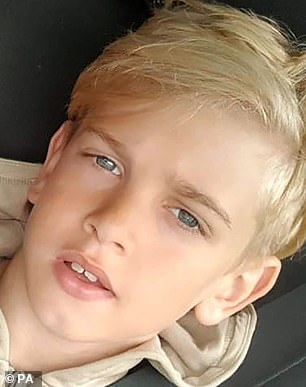 Paul Battersbee, who is in his 50s, has fought a desperate campaign to save Archie alongside the 12-year-old’s mother, Hollie Dance. Paul is pictured kissing Archie in hospital (left). Pictured right: Archie before his accident 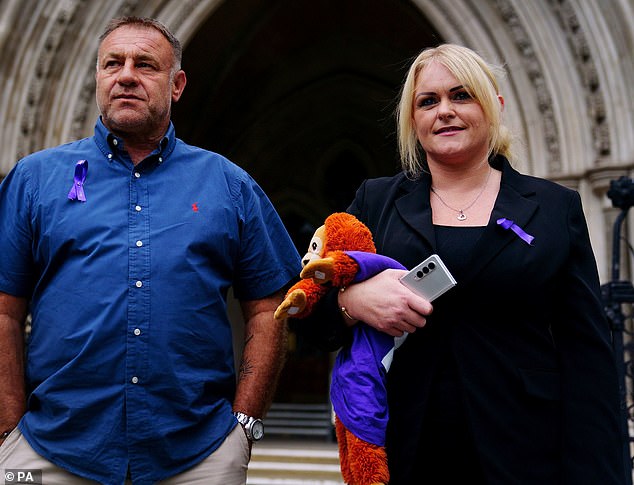 Mr Battersbee (left) is still in hospital after suffering a suspected heart attack yesterday. He is seen with Archie’s mother, Hollie Dance

April 7 – Archie is found unresponsive at his home in Southend, with a ligature around his neck.

May 5 – The Royal London Hospital, which is treating Archie, asked a judge to decide what was is in his best interests because medics believed he was braindead.

May 13 – The judge calls for Archie to have a brain stem test after a hearing in the Family Division of the High Court in London on Friday.

June 1 –  Judge Arbuthnot visits Archie in hospital to see for herself his condition and treatment.

June 7 – High Court hearing to work out what should happen is told parts of Archie’s brain are dead.

June 13 – The judge rules Archie is ‘likely’ brain dead and life support should stop. His family say they will appeal the ruling in a ‘legally complex’ process that could take months to conclude.

June 29 – Archie’s parents say they’ve ‘got everything we wanted’ after winning the right to a new hearing.

David Foster, from the law firm Moore Barlow, said they wanted the video to be submitted to judges as ‘new evidence’ so they could review their decision to disconnect him from a ventilator.

Mr Foster added that  Ms Dance and Mr Battersbee, who are separated but both live in Southend, Essex, plan to take an appeal in Archie’s case to the European Court of Human Rights.

Appeal judges Sir Andrew McFarlane, the president of the Family Division of the High Court and the most senior family court judge in England and Wales, Lady Justice King and Lord Justice Peter Jackson yesterday upheld a ruling by a High Court judge who concluded that doctors could lawfully stop providing life-support treatment to Archie.

Archie, a talented gymnast, has been in a coma since he was found unresponsive with a ligature around his neck at his home in Southend on April 7 – allegedly after taking part in a social media trend known as the ‘blackout challenge’.

Sir Andrew, referencing media coverage of the case, yesterday said Archie was ‘no longer the boy in the photograph’ but ‘someone whose every bodily function is now maintained by artificial means’.

Ms Dance said following the ruling: ‘All we have asked for from the beginning is for Archie to be given more time and for Archie’s wishes and ours to be respected.

‘As long as Archie is alive, I will never give up on him, he is too good to give up on.

‘When he is to die, we believe it should be in God’s way and in God’s time. What is the rush?

‘Why is the hospital and the courts so keen to push this through as fast as possible?

‘I don’t believe there is anything ”dignified” about planning Archie’s death.

‘For me, this would be the most traumatic outcome.’

Mr Battersbee is not believed to have had pre-advanced warning of the ruling.

Archie has not regained consciousness after he was found unresponsive with a ligature around his neck at his home in Southend, Essex on April 7. He is thought to have been taking part in a social media challenge 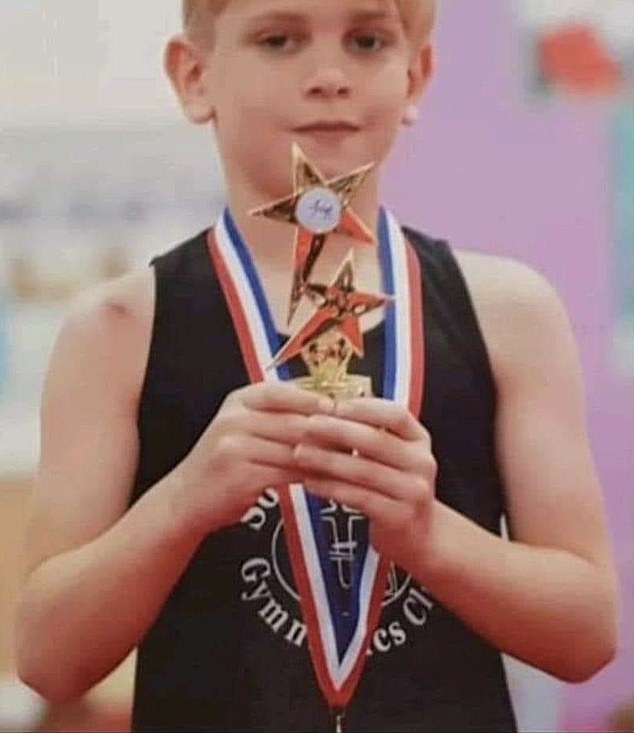 Archie, pictured wearing a medal and holding a trophy, was a talented gymnast. His mother believes he was taking part in a viral social media challenge when he was found injured

Bosses at the Royal London Hospital’s governing trust, Barts Health NHS Trust, had asked for decisions on what medical moves were in Archie’s best interests.

But Court of Appeal judges upheld a challenge by his parents against decisions taken by Mrs Justice Arbuthnot and said the evidence should be reviewed by Mr Justice Hayden.

Is brain stem death the same as being in a vegetative state? And what are the chances of recovery? Everything you need to know as judges rule 12-year-old Archie Battersbee’s life support should be switched off

This is different to a ‘vegetative state’ which happens after extensive brain damage, like that suffered by F1 racing legend Michael Schumacher in a catastrophic skiing accident in 2013.

It is permanent, meaning the affected person will never regain consciousness or start breathing on their own again. They are legally confirmed as dead, with the time on their death certificate logged when they fail a catalogue of tests.

The NHS says it can be ‘confusing’ because brain dead people can still have a beating heart and their chest will ‘rise and fall with every breath’. However, this is solely down to life support machines — not because the person has miraculously regained the ability to do this themselves.

Occasionally, the limbs and torso can move. But this is simply down to reflexes triggered by nerves in the spine that are not linked with the brain. It does not indicate that the brain is still working. 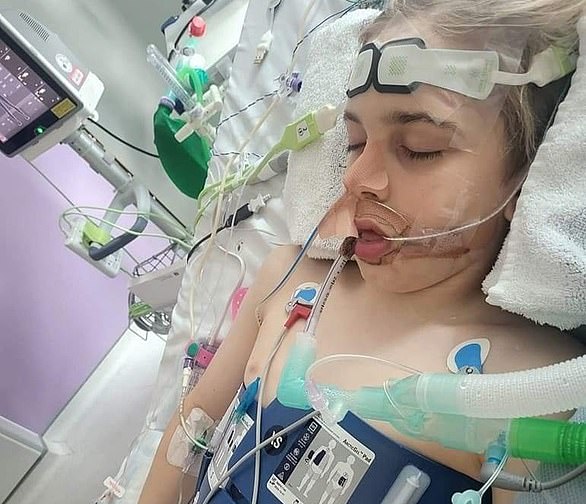 Archie was found with a ligature around his neck on April 7 and never regained consciousness. Doctors at the Royal London Hospital in Whitechapel, east London, believe he is ‘brain-stem dead’ but his parents are fighting to keep his mechanical ventilation

Whereas, it is scientifically possible for someone in a vegetative state to recover. This is because their brain stem, which controls breathing and heartbeat, still functions, meaning they may show signs of being awake — such as being able to open their eyes.

One year after going into a vegetative state, around 43 per cent will regain consciousness, 34 per cent die and 23 per cent are still vegetative.

However, those who wake up are often minimally conscious, unable to communicate and have to be fed through a tube.

Dozens of people claim to have beaten brain death in the past. Zack Dunlap, a 21-year-old from Oklahoma, told of how he heard doctors tell his family he was brain dead following a scan. But his arm moved while he was being prepared for organ donation. He later woke up, recovered and went home seven weeks later.

But the Neurocritical Care Society, a network of more than 2,000 healthcare workers, says it is impossible. Writing in an FAQ page, it said: ‘If anyone claims to have recovered from brain death, then the diagnosis was incorrect.’

The brain stem is located at the bottom of the brain and controls consciousness, awareness, breathing and the ability to regulate heart and blood pressure.

If damaged – through trauma in Archie’s case, or through bleeding, infections or tumours – it swells up but has no room to expand because it is encased inside the skull. This causes pressure to build up, leading to a drop in blood flow to the brain and damage to tissue.

This pressure and swelling pushes the brain through a small opening at the base of the skull, which can not always be stopped or reversed.

When the brain stem stops working, it cannot send messages to the body to control any functions and cannot receive messages back from the body. This damage is irreversible.

Six tests need to be met before a person can be declared as a brain stem death. These include the pupils not responding to light, having no cough or gag reflex and being unresponsive to pain.

Speaking outside of the Royal London Hospital in Whitechapel, east London, Archie’s mother Hollie Dance said: ‘I do not believe Archie has been given enough time. His heart is still beating he has gripped his hand and as his mother and my gut instincts I know my son is still there.

‘Until it’s God’s way I won’t accept he should go. I know of miracles when people have come back from being brain dead. We intend to appeal and will not give up on Archie.’

His blood pressure and heart rate have also been increasing and then dropping, something she has been told could be ‘neurostorming’ — when the nervous system suddenly reacts, which can be a sign of recovery.

But giving evidence at a previous hearing, a specialist told the judge about a number of concerns noted by Archie’s treating team.

She said tests had shown no ‘discernible’ brain activity, but revealed ‘significant areas of tissue necrosis’, adding: ‘We believe that it is very likely that he is brain-stem dead.’

Two doctors have to agree on the diagnosis and must agree that medicines and hypothermia have been ruled out if the patient does not respond to tests. And the assessment will only be done once any sedatives a patient is on have worn off, as these can effect their ability to react to the test.