Amber Heard is expected to take the witness stand Wednesday to defend herself in the defamation suit filed by her former husband, fellow actor Johnny Depp, who accused her of falsely alleging that he had abused her.

Depp is suing Heard for $50 million in damages over a 2018 essay she wrote for The Washington Post, in which she said she had become the "public figure representing domestic abuse." Although the essay never mentions Depp by name, his attorneys said it indirectly refers to allegations she made against him during their 2016 divorce. Heard is countersuing Depp seeking $100 million in damages.

The high-profile trial, which is being held in Fairfax County, Virginia, is in its fourth week.

Heard’s attorneys argued for a motion to dismiss Tuesday on the basis that Depp's attorneys failed to meet their burden of proof, saying it was undisputed that Heard was physically and verbally abused. They also argued that Depp’s attorneys have questioned the headline for the essay’s online version. But the headline was written by The Washington Post, not Heard, according to one of Heard’s attorneys.

Depp’s attorneys argued that Heard co-signed the headline as her own when she tweeted the article in December 2018, but his legal team has not submitted the tweet to the court as evidence.

Fairfax County Circuit Judge Penney Azcarate said Tuesday that it will be up to the jury to determine whether the weight of the evidence presented by Depp's team has met the burden, dismissing those arguments.

But as for whether or not Heard's tweet constituted an adoption of The Washington Post's headline, Azcarate said she would continue to take it under advisement.

"There seems to be an agreement that the tweet of Ms. Heard is part of the plaintiff's evidence, which is not in evidence at this point," Azcarate said Tuesday. "So I can't rule on that statement whether or not it is just a tweet or if it's some sort of republication. … I don't know because I haven't seen it yet."

In 2016, Heard filed for a protective order against Depp, alleging that he threw a phone at her, leaving her bruised. She wrote in a sworn declaration to the court that she was living “in fear that Johnny will return to [our house] unannounced to terrorize me, physically and emotionally.”

Depp has denied the allegations of abuse, telling the court over four days of testimony that he had never "struck a woman in my life." He characterized his former wife as having a "need for conflict," instigating fights and physical violence, in the course of their relationship.

Depp also testified that he felt pressured by his attorneys to agree to a joint statement with Heard following their divorce settlement that stated that neither party made false allegations during the dissolution of their marriage.

He told the court that the tip of his finger was severed after Heard threw a vodka bottle at him during an argument in Australia while he was filming the fifth "Pirates of the Caribbean" movie. His attorneys presented photos of his injuries, which Depp testified required surgery.

Heard has said she has hit Depp only in self-defense or in defense of her younger sister.

On the witness stand recounting his version of the 2016 fight that Heard referred to in her request for a protective order, Depp said he "flung" the phone onto a couch. Depp said the two were in his penthouse a day after he called Heard to tell her that his mother had died and that he wanted to file for divorce.

Heard wanted to speak, Depp said, so he went over to have a discussion and gather his belongings. They had not spoken for nearly a month at that point, he said.

Depp's attorneys presented audio clips of fights recorded by the couple while in the middle of arguments, including one in which Heard says she hit Depp while denying having punched him.

During cross-examination, Heard's legal team tried to undermine Depp's characterizations of the couple's time together. They displayed text messages he sent that included violent language and pushed back against his descriptions of his alcohol and drug consumption.

They also played clips recorded during the couple's arguments, including one in which Heard appears to confront Depp for assaulting her.

“You throw a swing when you can — when better than I’m on the floor? ’Cause that’s when it’s really good to hit someone,” Heard says in one recording. 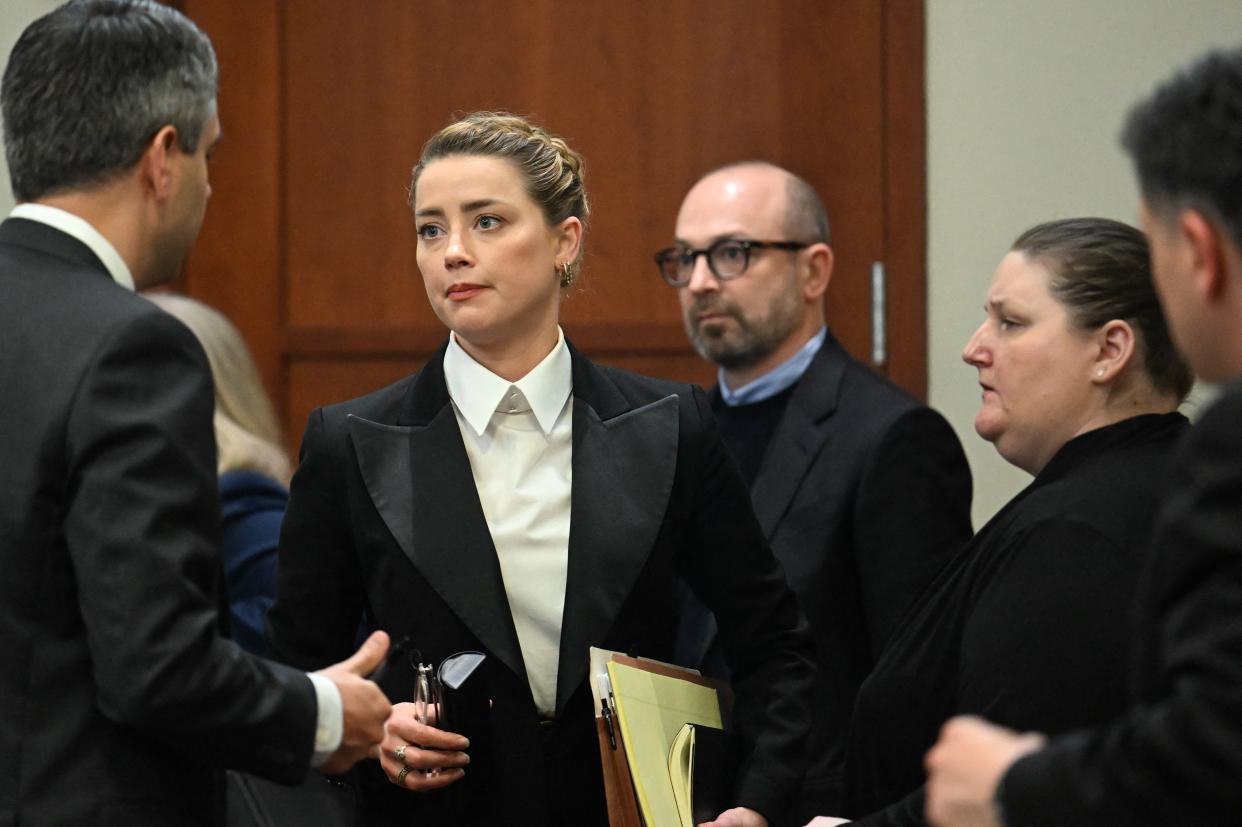 Depp admitted on the witness stand to a previous opiate addiction that he detoxed from during his relationship with Heard, but he denied having an addiction to alcohol. He also rejected any characterization that he was out of control while inebriated.

He accused Heard of using his history with substance abuse against him because it was an “easy target.”

“Once you’ve trusted somebody for a certain amount of years and you’ve told them all the secrets of your life, that information then, of course, can be used against you. … I am not some maniac who needs to be high or loaded all the time,” Depp said.

Heard’s first witness, Dawn Hughes, a clinical psychologist, told the court Tuesday that she had diagnosed Heard with post-traumatic stress disorder as a result of what she described as intimate partner violence she experienced during her relationship with Depp.

It is Depp's second legal case regarding allegations that he abused Heard during their marriage. He lost a case against News Group Newspapers, which publishes the British newspaper The Sun, for calling him a “wife beater” in a 2018 article about the couple.

Heard was not a defendant in that case, but she testified at the trial. A judge ruled in the tabloid's favor, saying its attorneys proved that the allegations were substantially true.

Depp's attorney at the time, David Sherborne, argued that Heard was a "wholly unreliable witness" and a compulsive liar.