THAWED OUT! Alaska snow crab season canceled for the first time ever as officials investigate disappearance of an estimated 1 BILLION crabs in the last two years – a 90% drop in their overall population

The famed snow crab fishing season in Alaska’s notorious Bering Sea is canceled for the first time in the state’s history. The cancelation was confirmed on Monday.

The decision comes as officials announced that one billion snow crabs have gone missing from the sea. An investigation into the disappearance by government agencies is continuing.

According to the Alaska Department of Fish and Game, over the last two years, the snow crab population has dropped by around 90 percent.

Snow crab is typically found in Alaska water in the Bering, Beauford and Chuckchi seas. There are around 65 boats fishing those waters.

Alaska provides 60 percent of the seafood consumed in the United States.

In addition to the cancelation of the snow crab season, the Bristol Bay red king crab season has also been canceled. 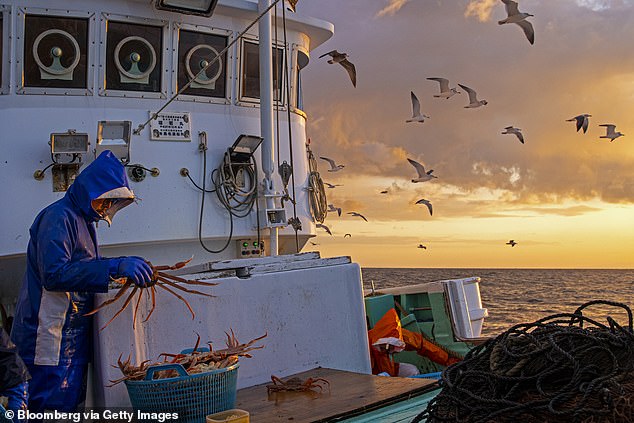 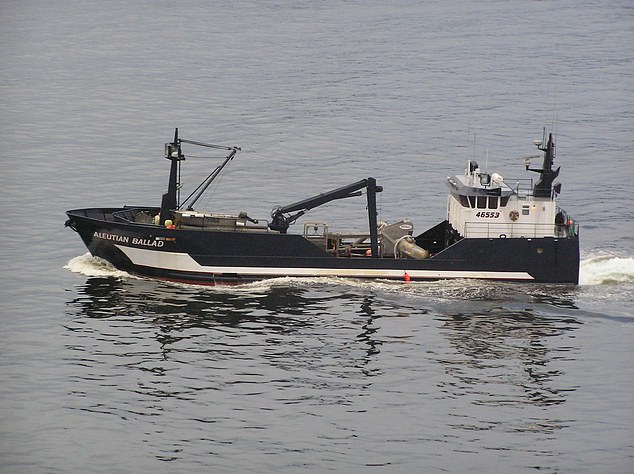 According to the Alaska Department of Fish and Game, over the last two years, the snow crab population has dropped by around 90 percent

Miranda Westphal, of the ADF&G, told Alaska Public Media: ‘In 2021 when they surveyed, we saw the largest decline we’ve ever seen in the snow crab population, which was very startling, I think, for everyone.’

Westphal said that she believes global warming is involved in the disappearance of the crabs. She suggested that the crabs may have starved to death because their metabolism increased due to warm water.

While another ADF&G scientist, Ben Daly, said in a CBS News interview that he believes the cause of the disappearance is due to some kind illness among the crab.

In an earlier statement, the body said: ‘Management of Bering Sea snow crab must now focus on conservation and rebuilding given the condition of the stock. Efforts to advance our science and understanding of crab population dynamics are underway.’

A local fisherman, Gabriel Prout, told Alaska Public Media: ‘People are really going to have to make some hard calls here, whether that’s…selling their vessels [or] looking for other opportunities in other fishing sectors which is few and far between.

Prout also said: ‘Fishermen are really going to be hurting the next year.’ He added that his hope that the state would move quickly to reply to the fishermen’s disaster relief.

Speaking about the disappearance of the snow crab, Prout said: ‘Did they run up north to get that colder water? Did they completely cross the border? Did they walk off the continental shelf on the edge there, over the Bering Sea?’

Another trawlerman, Dean Gribble Sr, told NBC News that the decision to cancel the season would be ‘life-changing, if not career-ending for people.’

Gribble told the network that he has worked in the area since the 1970s. Nowadays, he is the captain of his own vessel. 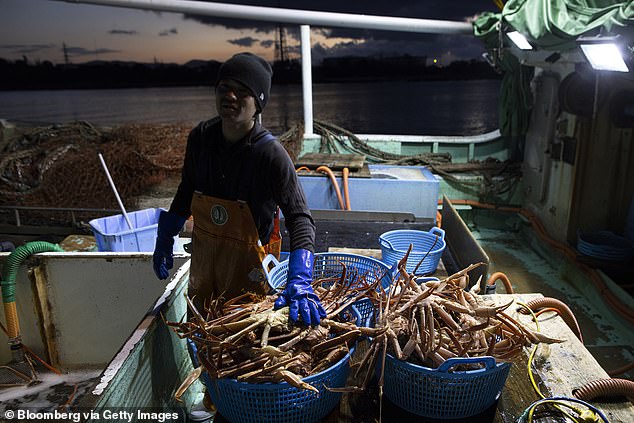 Alaska Department of Fish and Game said in a statement: ‘Management of Bering Sea snow crab must now focus on conservation and rebuilding given the condition of the stock’ 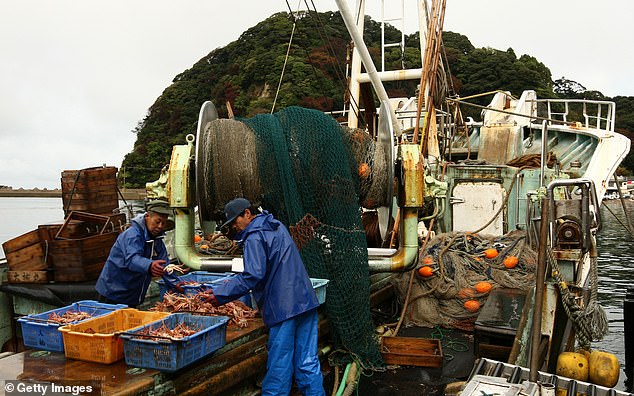 Fisherman Dean Gribble Sr, told NBC News that the decision to cancel the season would be ‘life-changing, if not career-ending for people

He also said: ‘A lot of these guys with families and kids, there’s no option other than getting out. That’s where the hammer is going to fall — on the crew.’

The executive director of the Alaska Bering Sea Crabbers, Jamie Goen, told KING5: ‘Many of them are small family businesses, second- and third-generation fishermen and they are losing their jobs. It’s simply devastating.’

The National Oceanic and Atmospheric Administration estimated that the value of the snow crab fished in the Bering Sea was nearly $102 million.

Speaking to the same station, the wife of one of the star’s Deadliest Catch, said that the fishermen found out at the same time as everyone else that the season was canceled.

Bri Dwyer, wife of Sean Dwyer, said that the fishermen are allowed to catch, Bairdi, a specific type of snow crab.

She said: ‘There’s a small Bairdi season, a little over 2 million pounds and we need to see if it makes sense for our boats.

According to the organization, the Bering Sea has faced record breaking heat waves. One in particular occurred between 2014 and 2016 known as ‘The Blob.’

While another heatwave lasted between 2018 and 2021. That heatwave hit as the snow crab population was starting to grow again.

Westphal said that 2018 saw the biggest growth in the snow crab population in recorded history. The growth slowed in 2019. There was no crab census in 2020 due to Covid-19.

The number in 2021 was ‘the biggest crash we’ve ever seen in snow crab,’ Westphal added.

The NOAA has labeled Alaska has the fasted warming state in the country. 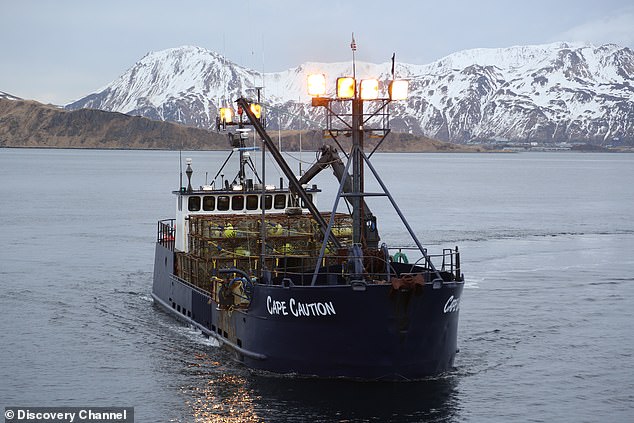 Speaking to the KING5, the wife of one of the star’s Deadliest Catch, said that the fishermen found out at the same time as everyone else that the season was canceled 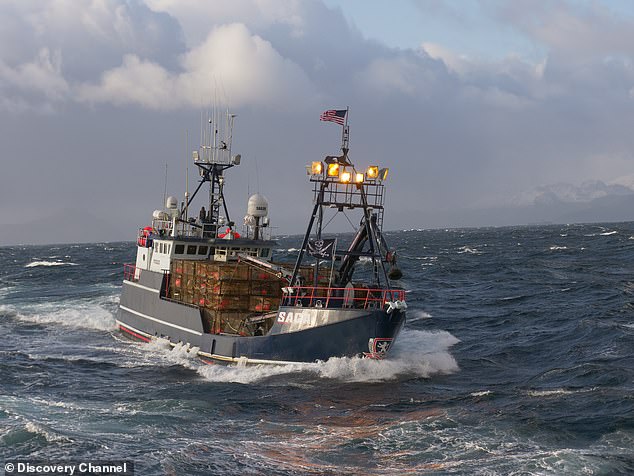 Bri Dwyer, wife of Sean Dwyer, said that the fishermen are allowed to catch, Bairdi, a specific type of snow crab

Alaska, within the limits of a federal management plan that comes up with an allowable biological catch, determines how many crab are caught.

A scientific model of the snow crab population reviewed by the federal North Pacific Fishery Management Council last week indicated there may have been enough this year for another small harvest.

However, Ben Daly, an Alaska Department of Fish and Game research coordinator, said the model has struggled to account for the dramatic population decline after the 2019 warming, and state officials were concerned it might not be accurate.

‘We have extreme conservation concerns about the population. We have serious doubts about the model,’ Daly said.

The fall red king crab harvest was canceled for the second year running because of the low number of mature female crabs, which are an indicator of the broader health of a stock that has been in long-term decline.

The survey needs to find at least 8.4 million mature females to OK a harvest, and the 2022 survey, though it showed improvement from 2021, still fell below that level, according to Daly.

Fisheries that accidentally catch Bristol Bay king and snow crab will continue at this point without new restrictions.

The Alaska Department of Fish and Game also announced on Monday that a small Bering Sea crab harvest of more than 2 million pounds of tanner crab will open Oct. 16.