A wintry image of a shy mountain hare at sunset has won the top prize in the RSPCA Young Photographer Awards 2022.

The photo taken by 18-year-old Ben Harrott, from Oldham, Greater Manchester, was singled out from more than 4,000 entries to claim the title in the annual competition.

The judges said they chose the shot because they were impressed by Ben’s ability to capture this rare encounter with such a shy animal as well as the ‘bravery of the near abstract composition’.

Every year, the animal charity invites youngsters aged 18 years and under to capture the animal kingdom on a camera or a mobile device. 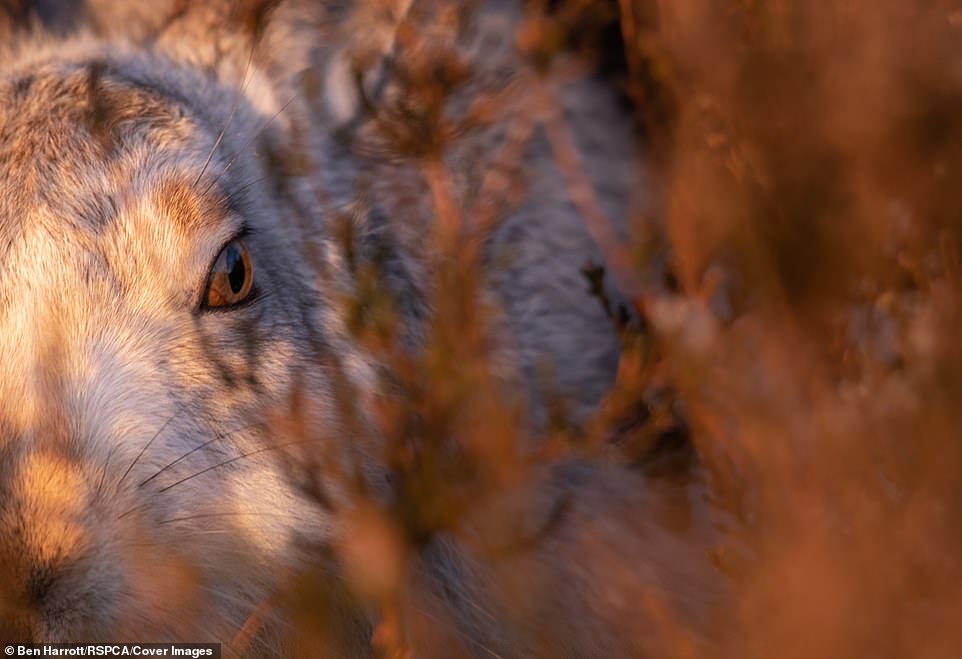 Ben Harrott, from Oldham, Greater Manchester was crowned winner of the RSPCA photography contest for youngsters for this photograph of a mountain hare

In addition to being crowned this year’s overall winner at a Tower of London ceremony, the hare photo won the 16 to 18 age group category.

Ben said: ‘I’m so happy that the judges liked my photo of a mountain hare so much.

‘Winter at my local moorland is often cold and this particular day was freezing. The winter sun was out which didn’t help at all and after walking for hours I finally spotted this mountain hare.

‘After an hour of steady approach, I was the closest I’ve ever been to a mountain hare. The sun was setting and the mountain hare was fully relaxed in my presence, so I was able to photograph this individual up close as the sun was going down.’ 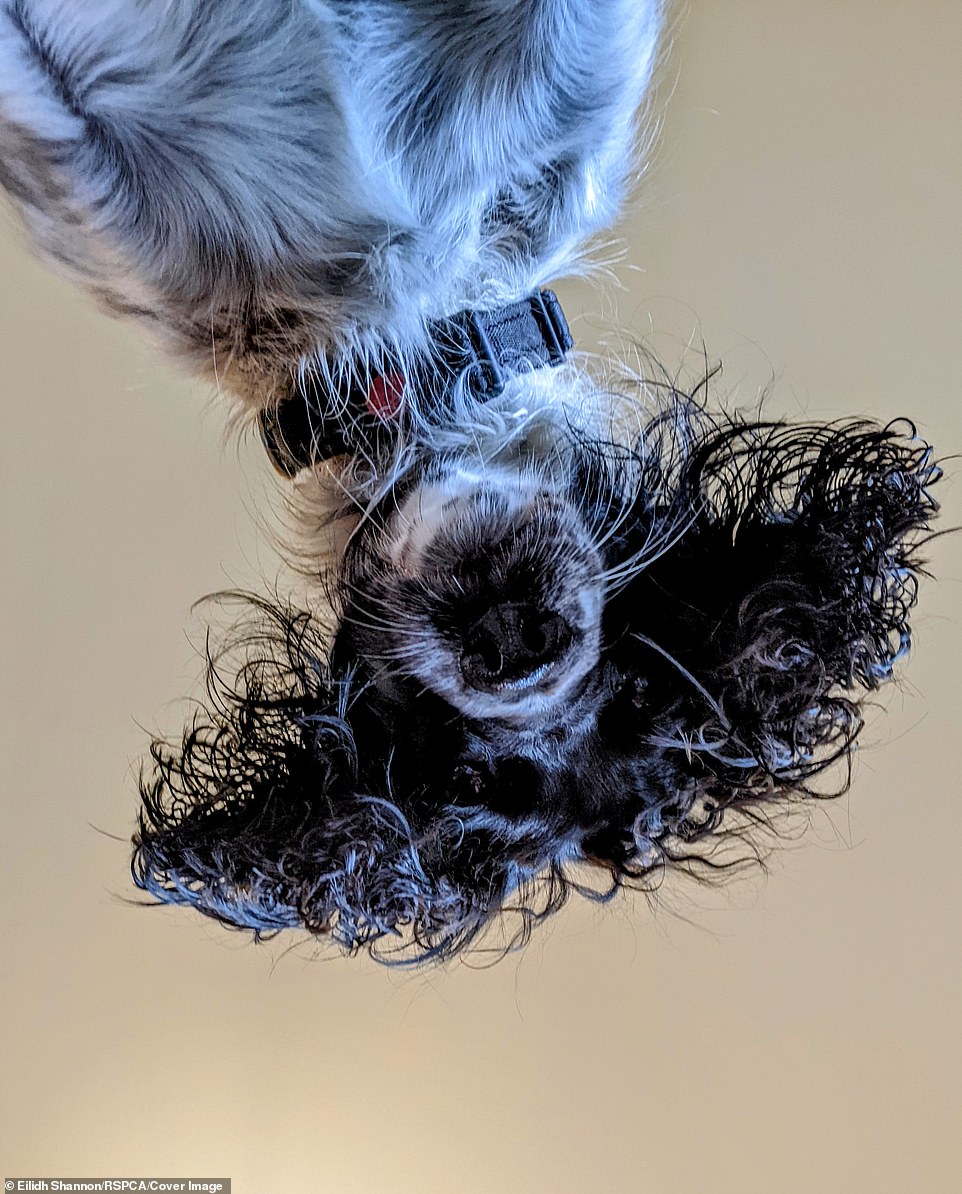 There were more than 4,000 entries for the RSPCA Young Photographer Awards for this year. The winning images across ten categories were announced during an awards ceremony at the Tower of London. Eilidh Shannon won the ‘Under 12 Mobile Phone and Devices’ prize for this dog photo – she is just 10 years old 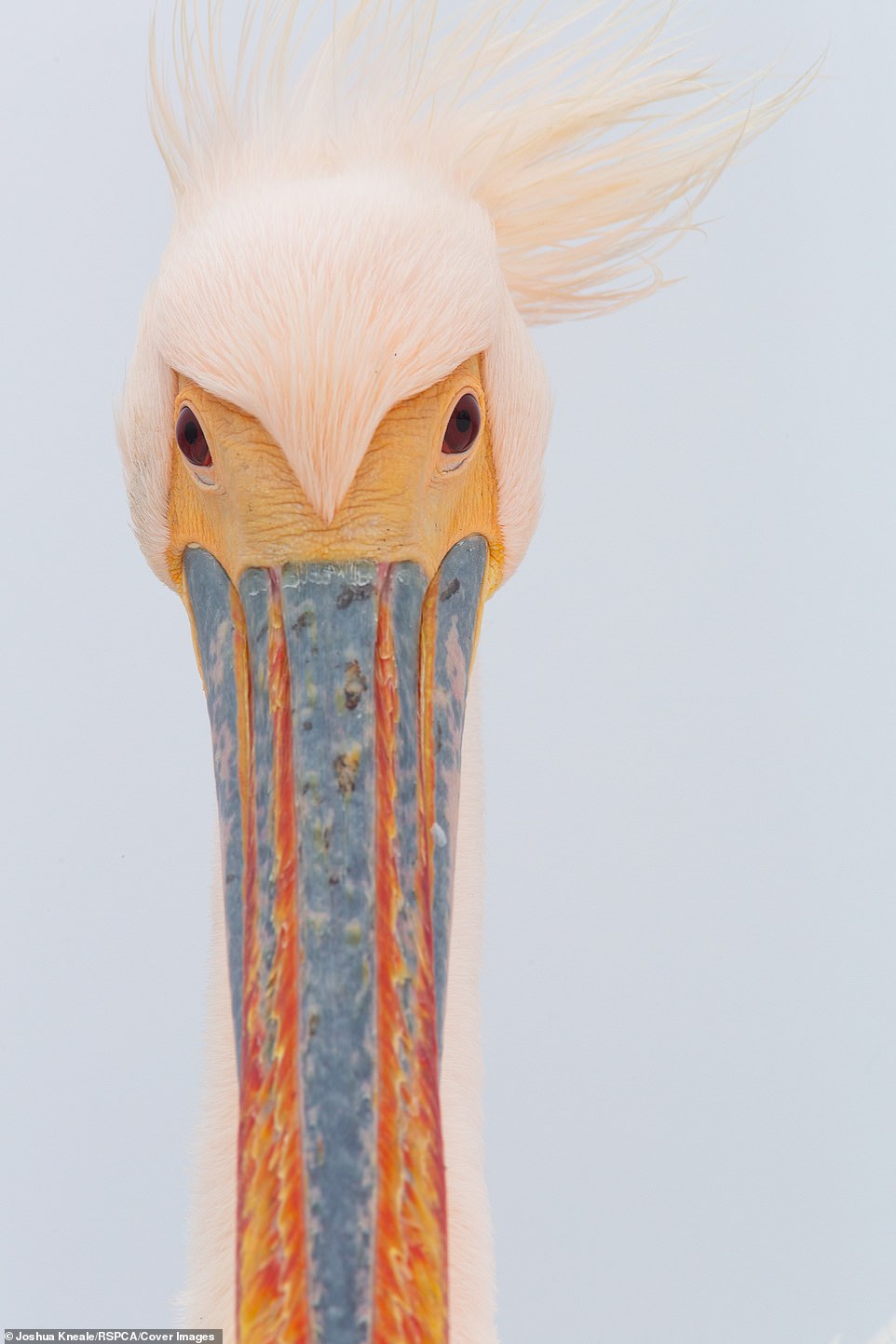 TV presenter and RSPCA vice president Chris Packham was amongst the judges for this year’s competition. This snap of a pelican in Namibia – known as ‘Meet Bill’ – won the 12-15 years age category

It is the second year Ben has won an award, having claimed runner up in the Portfolio category in 2021 for his series of fantastic images of red foxes.

Judge and awards host Chris Packham said: ‘This year’s contest was difficult to judge as we received so many superb photographs, however Ben Harrott’s stunning picture of a mountain hare really stood out. Ben is a really worthy winner.

‘We have seen a fantastic array of animals featured across this year’s competition. Every year I am impressed by the level and skill in the photographs that are submitted. This year’s entries were magnificent – top work everyone.’

An RSPCA spokeswoman said: ‘The judges were impressed by Ben’s persistence and field craft in capturing this moment with such a notoriously skittish subject and then taking such a skilled picture, with an almost abstract composition. 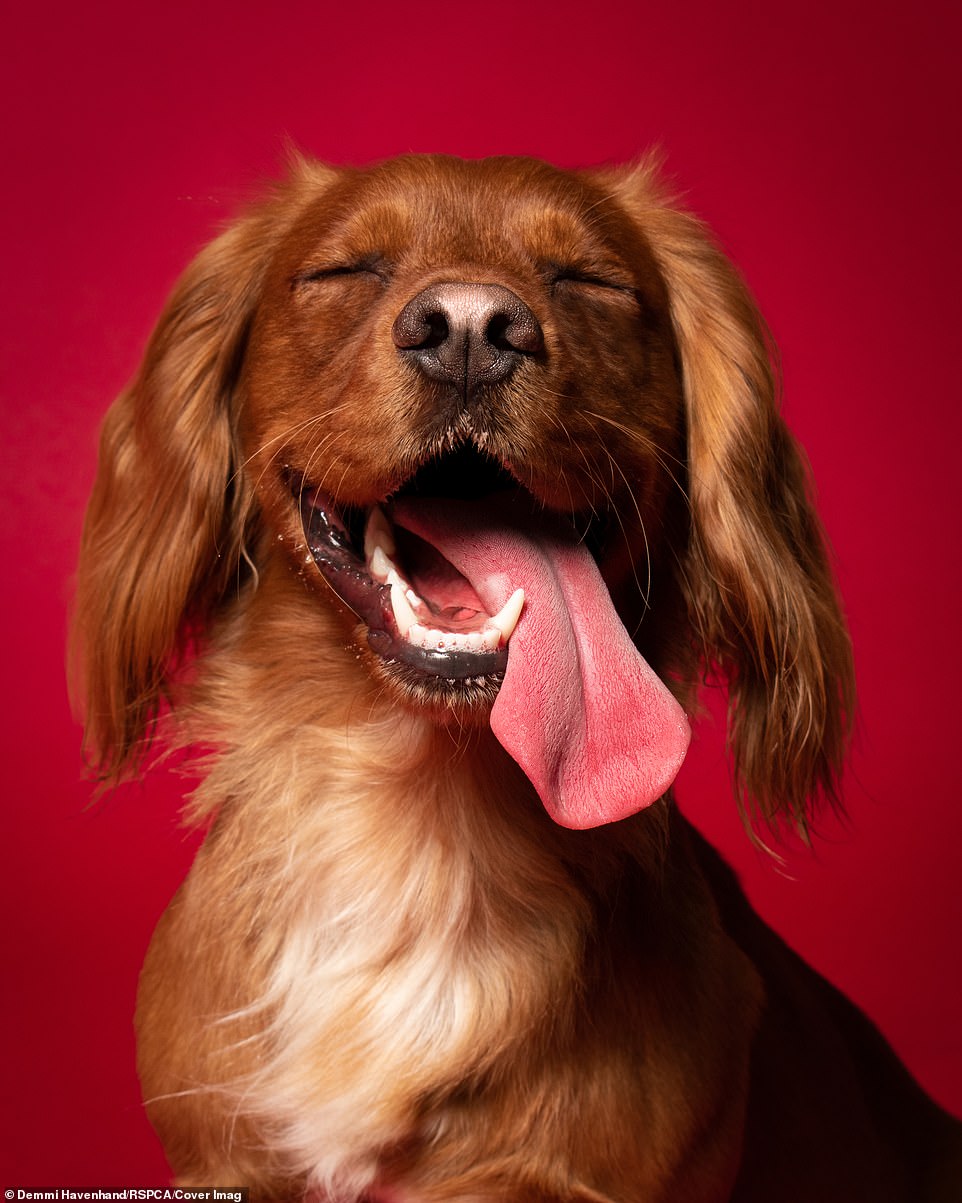 Winners in each category were awarded trophies and a selection of prizes. Demmi Havenhand, 18, won the Pet Portraits Runner-up award for this snap of Ralph the lively cocker spaniel 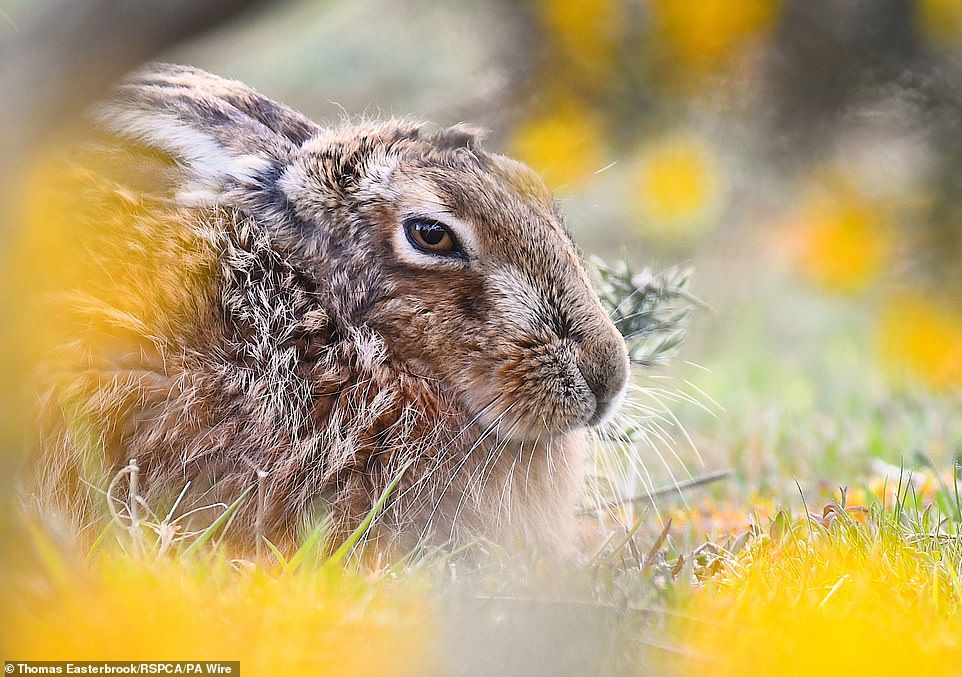 Thomas Easterbrook, from Beaconsfield in Buckinghamshire, took several photographs of brown hares in Havergate, Suffolk and Holt in Norfolk

‘The image also highlights the issue of climate change. Mountain hares live at higher altitudes and are camouflaged with a white winter coat for hiding against the snow, though the low winter sun gave this hare’s white fur a golden appearance, but warmer winters and little snow means it is harder for them to hide.

‘This hare was attempting to hide as best it could.’

Other prize winners included Lily Logan, from Beverley, East Yorkshire, who was a runner up in the 12-15 mobile category with her portrait of Angus the cat.

Thomas Easterbrook, from Beaconsfield in Buckinghamshire, was commended in the Small World category for his image of an orange tip butterfly. 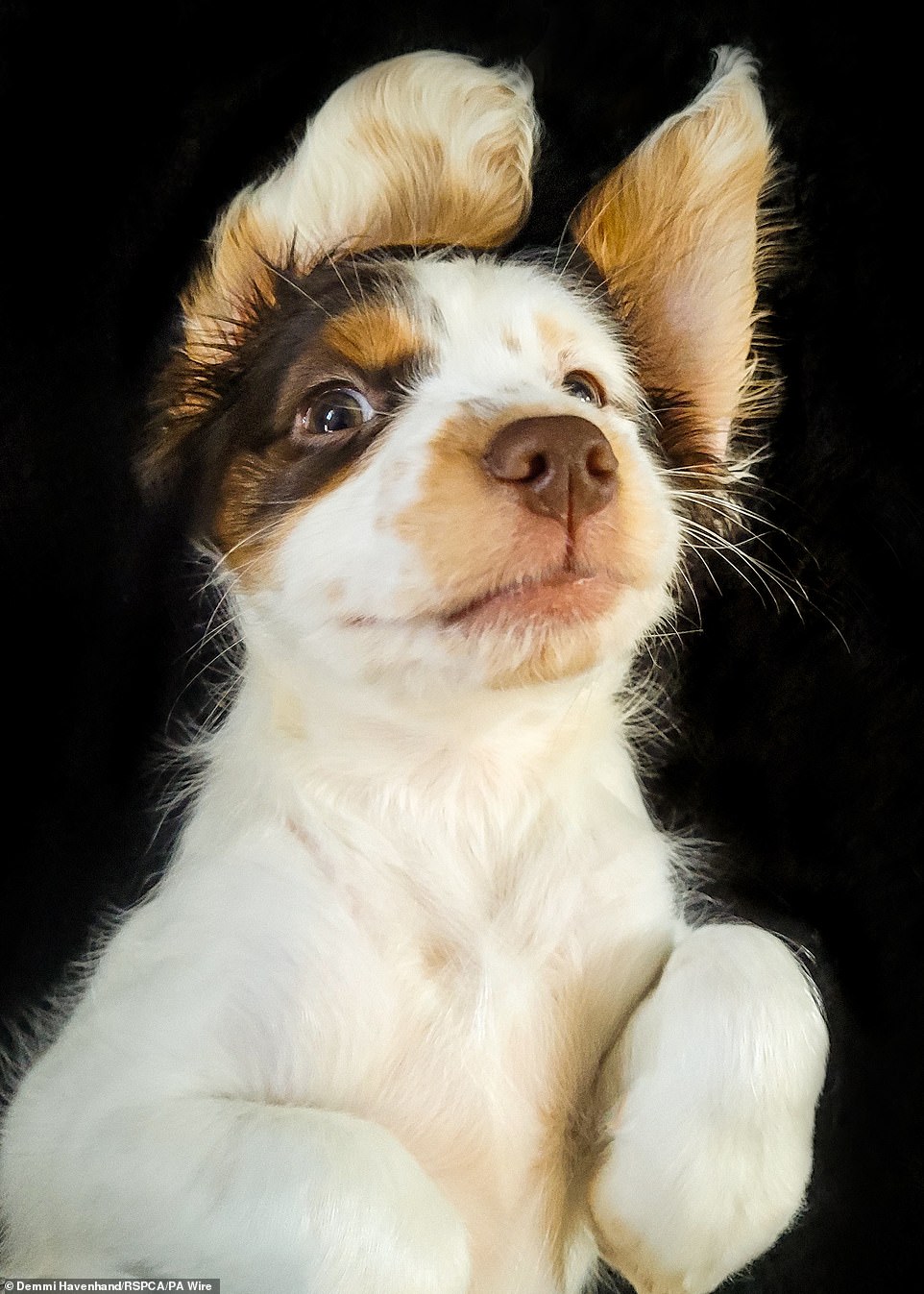 Demmi Havenhand, from Bedlington, Northumberland, saw ‘Baby Face’ win the Pet Personalities category. The photo of Demmi’s dog Callie was taken just after she was brought home for the first time 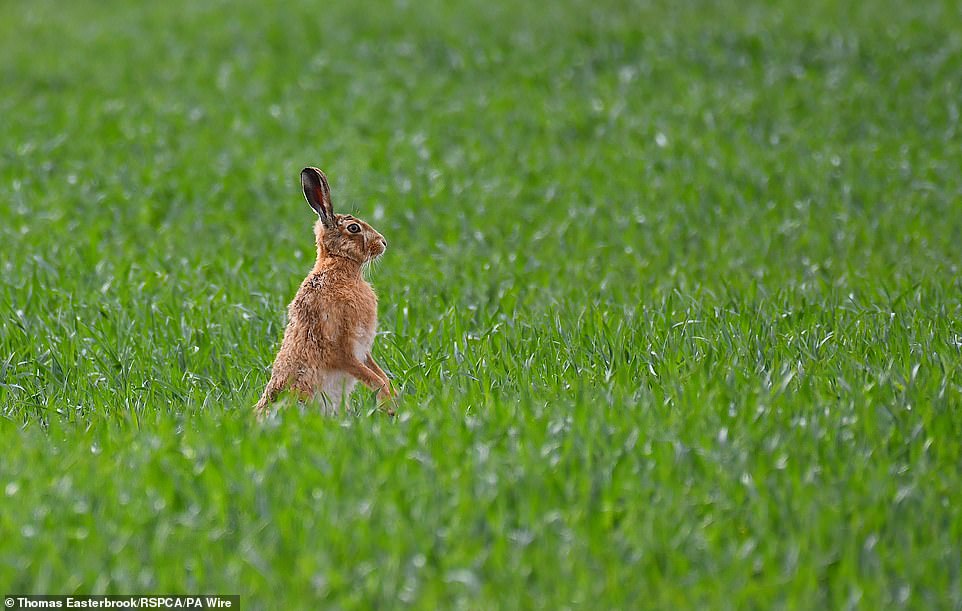 Judge and awards host Chris Packham said: ‘We have seen a fantastic array of animals featured across this year’s competition’

Winners in each category were awarded trophies and a selection of prizes and as overall winner Ben Harrott received a weekend wildlife photography break.