Your Governor Is Basically a Neighbor Who Makes Decisions About Your Uterus’s Future, So Choose Wisely

At the end of July here in Georgia, Governor Brian Kemp’s extreme and dangerous ban on abortion took effect in my home state, threatening the health, safety, and well-being of Black, brown, LGBTQ+ and rural Georgians. I thought I would be shocked by this, but I wasn’t.

The law, similar to those passed in the 13 other states that have already outlawed or severely restricted abortion, takes away a pregnant person’s right to make their own personal health care decisions as early as six weeks after conception—well before many even know they are pregnant.

After SCOTUS did what it did, these attacks on our reproductive freedom aren’t happening at the federal level, they’re happening in our own backyard. This election season, we really need to shift our focus to the officials who are more than likely our neighbors. Governor Kemp lives a 20-minute drive from my Atlanta home—hell, we may even go to the same grocery store (but be for real, he probably doesn’t do his own shopping)—and this is the person who decides whether I have the right to an abortion? Who determines if, when, and how I start a family?

This election season, we need to shift our focus to the officials who are more than likely our neighbors.

Elementary school social studies classes conditioned us to believe that the most important political position is our president. But let’s face it: The real power is in our state and local elections, and those positions are determined during the midterms.

Take, for example, the governorship—one of the most powerful political positions you can hold today. They control the majority of our state budgets, they get to set the agenda for what new laws will be either vetoed or written in, and so much more.

To keep it real, this is truly a life or death matter. Hear me out: Georgia has the second-highest maternal mortality rate in the country, and it’s even worse for Black women. In 2020, Black women in the U.S. were nearly 3 times more likely to die from pregnancy-related causes than white women. In Georgia specifically, 66.6 Black women died for every 100,000 living babies that were born, compared with 18.1 Hispanic women who died in the same amount of deliveries.

With our Black maternal mortality rates in Georgia, it is already risky to build a family, and the situation is only getting worse now that Roe is overturned. Denying access to reproductive care only increases the disparities marginalized communities already experience within our health care system. Yet, Governor Kemp was one of the loudest proponents of this draconian abortion law, even bragging that it’s one of the “toughest” bans in the country.

Denying access to reproductive care only increases the disparities marginalized communities experience within our healthcare system.

This reality is definitely scary, but it is not hopeless. The answer—even though it’s not an easy answer—is voting. We have the option to find some type of light at the end of the tunnel, and that’s electing folks and supporting organizations that align with our values. We are the ones who say “yay” or “nay” to who’s going to be our next representative—we really do have the power. If you’ve been told that your vote doesn’t count, listen to me when I tell you that that is such a myth. Don’t let nobody scam you out of your power.

Still, it’s okay to sit in this moment of sh*t not being all good. So be in your feelings, but don’t forget that there’s probably someone out there who represents your values, and you get to vote for them at the ballot box. If you don’t see that person though, then, like Lizzo said when she won her Emmy award on Monday night, “B*tch, it’s gon have to be you.”

Rich, old, white men have been standing in lockstep, wielding power for decades, and frankly, I am over it. Right now, showing up and voting is our claim to power. If our vote didn’t matter, they wouldn’t have spent decades trying to curtail it or take it away. If our voices weren’t powerful, they wouldn’t be working so hard to silence us. Voting for candidates who share our values is how we achieve power to implement the policies we need and deserve. If we don’t take the opportunity to vote, all of our rights are at risk.

Voting for candidates who share our values is how we achieve power to implement the policies we need and deserve.

Political organizations and politicians haven’t always done a good job of talking to us millennials and Gen Zers, so I created the web series Civics for the Culture to change that. Now in its third season, the show digs into specific topics and key political positions, like explaining what an attorney general does, connecting the dots of what’s happening on a broader scale. My hope is that Civics for the Culture makes politics real for us.

For instance, when the country was waiting to see if the state of Kentucky was going to prosecute the officers who were involved in the Breonna Taylor shooting, we were waiting on the attorney general to make that decision. Civics for the Culture helps us understand the impact of our elected officials’s power in real time. 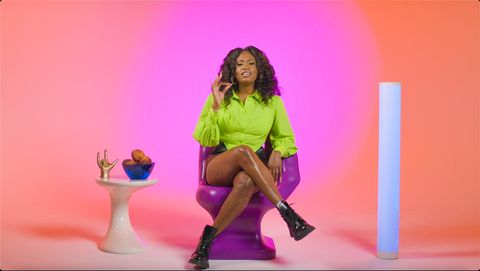 It’s time to make voting in every election a habit.

We are the culture. We are the ones that shift things and can make things happen. The best way that we can do that is through voting. It’s great to be able to say who you want or don’t want to represent you. Georgia has the opportunity to replace an incompetent governor—who has relegated Georgia women and LGBTQ+ people to second-class citizens—with a candidate who has demonstrated time and again that she understands the challenges Georgians face, that includes accessing the essential reproductive health care they need.

We are the culture. We are the ones that shift things and can make things happen.

This year, we need to think about our state officials and how their choices directly affect our lives. State politics moves faster than federal politics in a lot of ways, so if we want to see change quickly, we’ve got to focus at home. No matter where you live, make your voting plan today and get plugged in with a candidate or campaign in your community to help build a more resilient future for us, our communities, and our country. As Queen Bey said: “Be about that action, and go do it.” And who doesn’t listen to Beyoncé?

Season 3 of Civics for the Culture premieres September 15 on YouTube. New episodes are released twice a month through December 15.