National security correspondent Jennifer Griffin has the latest on the Afghan refugee resettlement on ‘Special Report.’

For retired Green Berets like Matt Coburn, who served five tours in Afghanistan, the war is not over.

“Once everybody left on Aug. 31, we’ve been just trying to keep them alive,” Coburn said, referring to Afghan elite commandos who could not get through Kabul airport gates. “The huge barrier we faced is because they were all fighting until the end, none of them had planned to leave and hadn’t applied for special immigrant visas. They have no status, and a lot of them don’t have passports.”

He and other U.S. military veterans are still working tirelessly through privately financed groups to rescue their translators and commandos, like the one we spoke to at Fort Dix New Jersey. He is a senior Afghan officer who joined the Afghan Army in 2002, was trained by U.S. Special Forces 3rd Group and helped establish the Center for Excellence and the Afghan commando training program.

The program was the pride of U.S. military generals who always showed visiting journalists and diplomats their elite training camp south of Kabul. The officer asked for anonymity, but with the help of Coburn, he managed to make it into the airport and escape Afghanistan on Aug. 26 with 39 extended family members, many of whom worked for the U.S. government.

“They told me I have to get to the airport, so I left home and stood two nights in front of the front gate,” the Fort Dix evacuee told Fox News.

Others were left behind and are now being hunted and tortured by the Taliban.

Coburn receives almost daily text images through WhatsApp showing what the Taliban is doing to those left behind. Images of female Afghan soldiers with bruises all over their backs, arms and legs from where they were hit with rubber hoses. A video of an Afghan officer who worked with an elite U.S. tiered unit surfaced showing him and his entire family being executed. Afghan forces are being rounded up and simply disappearing. 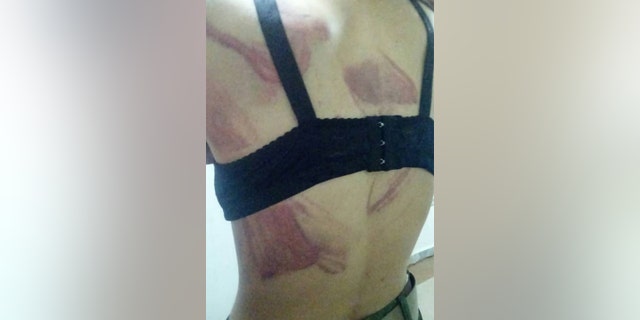 Another photo shows the slit throat of a soldier in Kunduz province executed by the Taliban during a search for his commando brother.

President Biden promised to continue evacuations even after the U.S. withdrew.

“Secretary of State Blinken is leading the continued diplomatic efforts to ensure a safe passage for any American, Afghan partner or foreign national who wants to leave Afghanistan,” Biden said in remarks at the White House on Aug. 31.

Those efforts are slow going, and over a month later, thousands of Afghan interpreters and commandos are hiding and waiting. They think the Biden administration is coming to save them.

Unlike the Afghan Army, the special operations commandos kept fighting the Taliban until the very end, even serving to shepherd Americans to the Kabul airport to help them escape. They didn’t have time to apply for SIV visas to save themselves.

The State Department says it has evacuated 105 American citizens and 95 lawful permanent residents since Aug. 31 but says it is difficult verifying manifests for private charters that need their assistance to land.

“Many of the passengers were not in fact eligible for relocation (to the) United States and, in some cases, that despite vetting to the best of our ability, the manifests were not accurate,” State Department spokesman Ned Price told reporters.

The issue of Afghan resettlement has bipartisan support among veterans.

A consortium of 25 veteran nonprofits formed Welcome US to show their support for resettling Afghans in the US.

A new survey of veterans from Blue Star Families and Welcome US found:

• 77% said the United States has an obligation to help those fleeing Afghanistan.

• 46% of respondents who served in Afghanistan have already taken action to help Afghan refugees.

“What I’ve found is that the Afghans that are in our country are so grateful to be here,” former Army Ranger Nick Palmisciano, who is part of Welcome US and Save Our Allies, told Fox. “They want to race to become productive members of society here.”

Palmisciano and members of the Independence Fund recently visited Fort McCoy, where 12,000 Afghans are still waiting to be resettled. Most of the evacuees are women and children. Save Our Allies, a partnership between The Independence Fund and The Mighty Oaks Foundation, has hundreds of veteran volunteers working at all 8 U.S. military bases housing 53,000 Afghans.

It’s a promise to allies and Afghan friends whose family members risked their lives for the U.S. government during 20 years of war, and it is helping veterans heal. But these veterans groups say, given the uptick of Taliban attacks and examples of torture and executions of those Afghans who helped the U.S., time is running out.