Last month’s Integrated Review announced the most significant change to its nuclear weapons policy in at least two decades with the decision to abandon a self-imposed cap of 225 warheads, increasing it to 260.

In 2014 the Government ruled out moving the location of its nuclear deterrent bases ahead of Scotland’s referendum, citing the large costs involved, and still outwardly holds to that line.

But the SNP continues to pledge that it would ban nuclear weapons on Scottish soil, should it become independent.

As things stand Devonport Dockyard in Plymouth remains the largest naval base in Western Europe. Covering more than 650 acres it has 15 dry docks, 25 tidal berths and five basins.

Until 2017, it housed the Royal Navy’s nuclear-powered Trafalgar class submarines until they were rebased in Faslane. While rehoming the submarines would be achievable, recreating Coulport would be challenging. 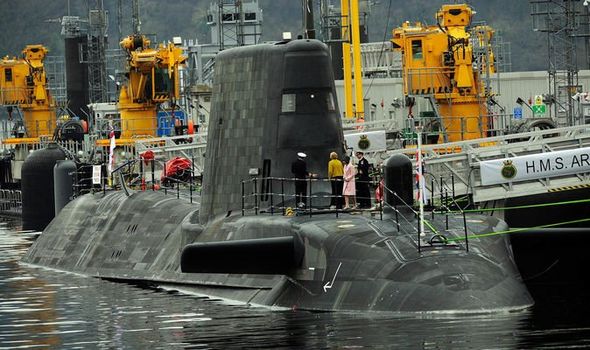 Devonport is two miles from Plymouth with a population of 250,000. A plan which considered housing the warheads in Falmouth, Cornwall, was ultimately rejected due to the Royal Navy’s requirements to keep the stocks within an hour’s sailing from the submarines.

But according to sources secret improvements are gradually being made to Devonport to make the plan more feasible if it be required.

Work carried out under the secretive Project C is said to be connected to a gradual programme of improvements, in anticipation of another Scottish referendum.

One senior Whitehall source confirmed last night: “A contingency plan is now in place should circumstances change and an independent Scottish government decide it no longer wants to host Britain’s nuclear deterrent.”

While the SNP is not expected to have a majority at next month’s Holyrood elections, support from Scottish Greens would still ensure a mandate to seek independence.

But recent polls show support to break away is at its lowest for more than a year. According to Savanta ComRes, 48 percent would vote No to independence with 45 percent voting Yes.