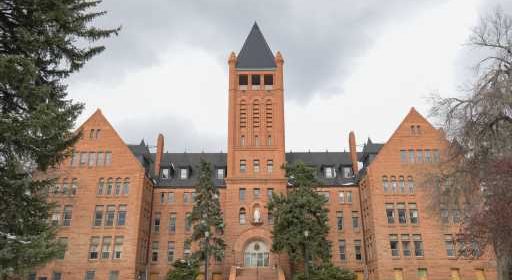 “The girls, young women, came from all over the country, some from out of the country to study here,” said Sister Mary Nelle Gage, a 1966 graduate of the school.

The school began accepting young men in the 1970s and has changed hands — and educational missions — multiple times since, yet the administration building’s tower has been a lasting high point and landmark in Denver since it was built in 1890. Gage acknowledges it’s time to consider how Loretto Heights can best contribute to the city.

A development company owns the 72-acre campus now, and believes the future of the site isn’t as another place of learning but a bustling housing, retail and office space. The proposal is driven by Westside Investment Partners, which also hopes to develop another massive tract of Denver land, the 155-acre Park Hill Golf Club.

Developments this large are rare, said City Councilmen Kevin Flynn and Chris Herndon, whose districts include, respectively, Loretto Heights and the golf course. It also puts Westside Investment Partners and its principals, which have donated more than $26,000 to city politicians in the years surrounding the two land purchases, in the league of developers who did Denver’s other major projects like Central Park, Green Valley Ranch, Lowry and River Mile.

Project leaders for Westside say they’re aiming to create developments that benefit the company and of which the city can be proud. But there’s skepticism among residents near the plots of land on the southwest and northeast ends of Denver who mistrust the public processes that decide what goes on a plot of land.

“This is their community,” Herndon said. “And I want to strongly encourage people to participate, it is going to be worth the time and effort.”

“There’s no such thing as low-hanging fruit”

Flynn said he and others on the southwest side of Denver tried “mightily” to find someone willing to buy Loretto Heights and to keep it running as a university. The school closed in the fall of 2017 when it was known as the Colorado Heights University by the Teikyo Foundation, and Westside Investment Partners began to look at the campus.

“When they told me they were buying it, I said ‘Oh, I wish you wouldn’t,’” Flynn said.

Westside closed on the 72-acre property in 2018 for $15.75 million and launched into what Flynn called the most significant and complicated project in southwest Denver in the last 25 years.

“What’s not complicated today?” said Mark Witkiewicz, Westside’s principal who is leading development at Loretto Heights. “There’s no such thing as low-hanging fruit.”

Witkiewicz, who also developed the popular Dairy Block in LoDo at a different company, said he launched into monthly meetings with neighborhood officials and residents, taking note of what they want preserved and what they hope the future brings for southwest Denver.

Neighbors care deeply about the historic buildings at the site as well as preserving the feel of a campus in general, Witkiewicz said. He envisions building single- and multi-family housing for sale and for rent, commercial and retail space, and perhaps even a grocery store.

Already, 74 affordable housing units are under construction on the campus at Pancratia Hall, which Westside sold to a different developer last year. Flynn said people could be living there by fall.

The rest of construction hinges on a pending zoning change that the City Council will consider next month, Flynn said.

The request is to drastically cut the square footage and maximum building heights, which would also let Westside build more retail and commercial space, particularly along the eastern edge that borders Federal Boulevard for about three blocks.

It’s a compromise that should alleviate concerns from neighbors, who don’t want to see the project completely undermine the campus they’ve known for generations, Witkiewicz said, but it won’t allay everyone.

“We are developers. We change land. That has implications to neighborhoods, cities, states, countries,” Witkiewicz said. “It’s a rippling effect. It’s a huge weight to carry.”

Park Hill Golf Club’s transformation is even further off, said Kenneth Ho, the Westside principal leading that project. The company bought the 155-acre property in Park Hill from the city in 2019 for $24 million. But there’s a catch: A conservation easement that protects it as a golf-related open space blocks development.

Earlier this year, city officials launched a controversial planning process to see how the easement could be changed, if at all. They’re currently asking residents if they want the site to be developed; one survey active through Friday asks what they would like to see on the property, or whether they want it to remain a golf course.

Ho said he’s heard the desire after hundreds of conversations for affordable, “missing middle” and market-rate housing, a grocery store, businesses and more.

But Herndon told The Post it isn’t clear whether the city will lift the conservation easement at all. And if development is what residents want, Herdon said that before the easement is lifted and any dirt is turned, everyone will know with a “significant amount of certainty” what will be built there.

Jim Gibson moved to southwest Denver in the mid-1980s and didn’t fall in love with Loretto Heights until he was asked to teach at the university just before it closed.

“There’s just so much history there,” Gibson said. “The architecture is out of this world.”

Gibson is one of 15 people on a steering committee meant to guide development on the campus, and is concerned its character could be lost forever to the development — even if it brings housing and other things the area needs. He also questioned how much weight the developers and city officials gave residents during the public process.

“My sense is that the outcome of that process offered considerable guarantees for the developer and a lot of maybes for the community,” Gibson said.

“Basically the city is in partnership with Westside,” he said, adding he has no hope for the future of the campus.

Westside founder Andy Klein, alongside Witkiewicz and Ho, have contributed to Hancock’s campaigns, too. Loretto Heights LLC, created in 2018 by Westside principal Kevin Smith, also contributed between $500 and $2,000 to various reelection campaigns, including Hancock’s and Herndon’s, since 2019.

“It wasn’t much,” Klein said. “Over the years we’ve given plenty of contributions to councils and mayors who have voted against our projects.”

And Witkiewicz, Ho and City Planning Manager Sarah Nurmela said the public meetings have been integral to crafting the visions for both pieces of land.

At the very least, Sister Mary Nelle Gage said she feels as though Witkiewicz genuinely cares what residents want out of Loretto Heights and has faith that he and Westside Investment Partners will keep the site’s history in mind and develop the area responsibly.

Gage warmly recalls the mountain views on campus and the chapel’s stained-glass windows from Munich that she calls “clearly Roman Catholic, but perfectly beautiful.” She even met with him monthly before the pandemic to discuss the legacy at stake — the historic buildings, the cemetery, the open space.

Gage isn’t a fan of “boxes that are painted gray and black that spring up all over the city,” but she acknowledged preserving the campus in a “glass globe” isn’t feasible.

“I’m trying to have that balance of reminding them what is there, what is valuable, what is beautiful, what is historic,” she said. “As well as trying to keep an open mind to what they envisioned.”

Gage said she and Flynn are leading an effort to name any new streets on the campus for the site’s history rather than adopting names off the city’s existing street grid.

Should Westside develop Loretto Heights responsibly, Gibson with the steering committee said, affordable housing and community gathering places can still nod to the area’s past. But there’s also a possibility that the development could send housing costs skyrocketing and force many residents out.

“History has a tendency to repeat itself,” Barnes said. “I would have to be exceptionally naive to throw blind trust out there.”

Whatever community members say they want on the site, Barnes said she’ll look for verification that city officials will hold to that agreement before lifting or changing the conservation easement.

“What I trust is a legally binding agreement that has automatic accountability measures put into it,” she said. “If we’re not talking about that, what we’re talking about is full of imagination and that means nothing as it pertains to the law itself.”

The Park Hill Golf Club is still in the early steps, with the “visioning process” that began earlier this year and won’t be done until this summer, city planning manager Nurmela said. After that, her office will decide how to amend the conservation easement — if at all — and all kinds of plans and agreements must then follow.

Loretto Heights is a bit further along.

All three must be approved before any work can begin at Loretto Heights, she said.

“In some sense, at least from where I’m sitting, we’ve handed it over to the developer,” Gibson said. “I’m praying the developer will be responsible, but it’s on him now. He may get it right and he might not.”