Sir Keir Starmer’s strategy of playing the National Anthem at the start of the Labour conference appears to have paid dividends with new polling showing that under-45s now believe his party is now “more patriotic” than the Conservatives. With the Tory conference starting today, the polling by Techne UK provides an alarming picture of Labour closing the gap on an area which has been a strength for Liz Truss’ party.

According to the survey of 1,624 UK voters over 28 and 29 September, 40 percent think the Conservatives are the most patriotic just five points ahead of Labour on 35 percent.

But the picture in the latest Techne UK poll gets better for Sir Keir in terms of a turnaround on the issue with all age groups under 45 with Labour leading in each category.

Even 45 to 54-year-olds category it is almost even with the Tories on 40 percent to Labour’s 39 percent.

The polling underlines how far Labour have gone since the 2019  election and appears to vindicate Sir Keir’s decision to sing God Save the King at the start of Labour’s conference.

It could also be a key factor in winning back Red Wall seats which flipped to the Tories in 2019 amid a perception that Labour was unpatriotic. 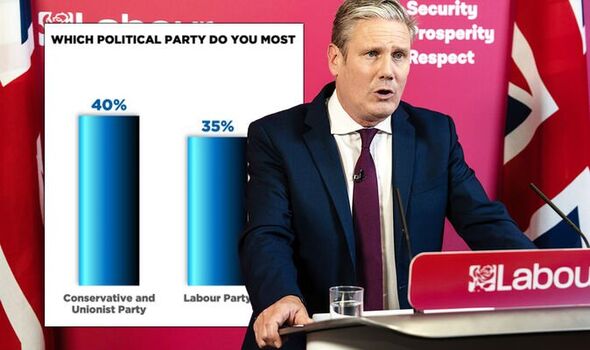 The findings show a massive improvement for Labour from the days under Jeremy Corbyn’s leadership where polls had them as “unpatriotic.”

Lord Ashcroft surveyed former Labour voters after the 2019 defeat and found Corbyn’s lack of patriotism was a key factor especially in an election where Labour was pushing for a second Brexit referendum.

In his report Ashcroft said: “Though a few saw good intentions, former Labour voters in our groups lamented what they saw as his weakness, indecision, lack of patriotism, apparent terrorist sympathies, failure to deal with antisemitism, outdated and excessively left-wing worldview, and obvious unsuitability to lead the country.” 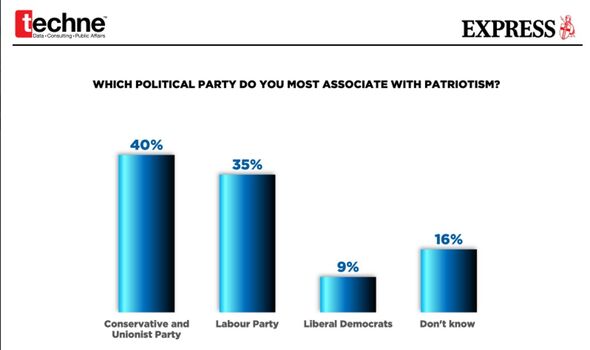 The change of tack was signalled over the summer when shadow Cabinet member Lucy Powell, a key ally of Starmer’s, insisted that Labour is “the true party of patriotism”.

She said: “Being patriotic isn’t something that Labour has always looked comfortable with.”

“But progressive politics has been at its most successful and transformational when it captures the best of British values, nurtures our world-famous institutions and instils a belief that our best days lie ahead of us, not just in the past.

“A quick survey across British politics today tells us that it’s not the Conservative party which enshrines these patriotic principles but Labour.”

If Labour really has a 33-point lead, the Tories face total wipeout [INSIGHT]

POLL: What most concerns you about the economic crisis?  [REACT] 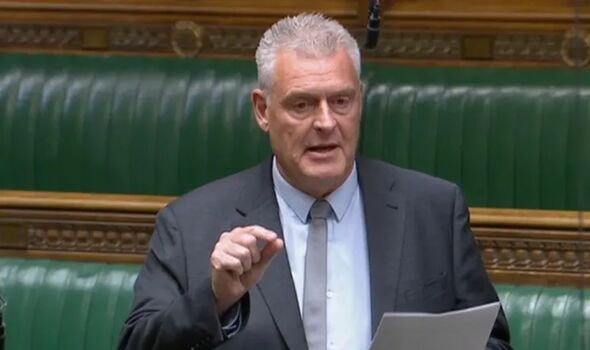 However, the poll by Techne UK suggests that different voters have different definitions of patriotism with 66 percent of Leave voters describing the Conservatives as more patriotic and 63 percent of Remain voters saying it is Labour.

Tory Ashfield MP Lee Anderson, who is a former Labour Party activist, said that his ex-party has simply put on a false veneer on patriotism.

He said: “If you looked carefully there were Labour members walking out when the national anthem was sung. They are not patriotic at all.

“But in the end, Labour can clutch at straws with patriotism but it is the money in people’s pockets which will decide the next election.

“People are grumpy at the moment but when they feel the effects of the tax cuts and other policies it will be different.”