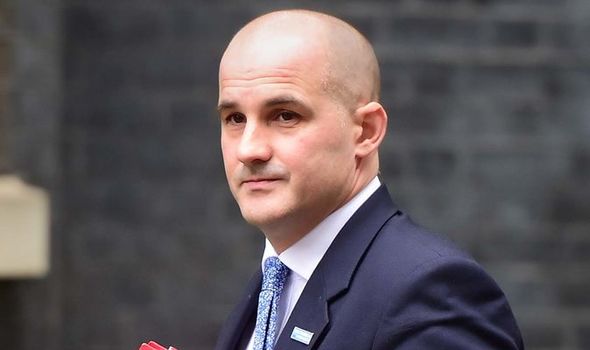 Jake Berry said the party risks losing voters if it does not slash the tax paid by shops.

This would make it easier for businesses to remain open and could revive town centres, it was said.

He warned that party supporters want to see results. Mr Berry said: “The public are clear – the burden of tax on bricks and mortar retail is too high.

“Without a cut in business rates at the Budget we risk losing support in our most marginal seats, including in the North and the Midlands.

“Cutting rates would be a huge boost to our local communities and would show quick delivery of the central mission of this Government – levelling up.”

The Tories stormed to victory in the 2019 general election after winning votes in “Red Wall” northern towns.

A Deltapoll survey of 1,598 adults published today found 66 per cent back the tax cut for shops.

But the support increases to 74 per cent for voters in Red Wall seats won by the Conservatives.

The poll also found 62 per cent agree there are more empty or closed shops in their area than before the pandemic, with only 10 per cent disagreeing.

Overall, respondents said they would be willing to pay more for their online shopping deliveries if physical shops could then benefit from a lower tax rate.

The findings add further weight to the Daily Express’s Save Our High Streets campaign.

The Government is preparing to release the findings of its fundamental review of business rates this autumn, which could change the amount of tax shops pay.

Last month, the British Retail Consortium warned that four out of five retailers would likely close stores without a reduction in the level of rates they pay.

Esther McVey, chair of the Blue Collar Conservatives, has joined calls for business rates to be cut. The MP for Tatton, Cheshire, said: “The burden of tax on bricks and mortar retail is too high, and the best single policy to revive our high streets would be to cut business rates.

“Levelling up must include ensuring taxes come down.”

A number of Tory MPs have urged Chancellor Rishi Sunak to cut at least 20 per cent off business rates, taking them to levels last seen in the 1990s.

A 20 per cent cut will return about £6billion to retailers.

Shops need levelling up, not boarding up, says CHRIS GREEN

In 2019 the Conservatives were elected to “level up” and transform the prospects of hardworking people.

Now we need to deliver. That means making sure that villages, towns and cities are thriving, dynamic places to live and work.

No one wants to go to their high street and see boarded-up windows. Shops bring areas to life – places to meet, catch up and socialise.

Thousands of outlets are at risk. First it was Covid and now business rates.

This shops tax makes it more difficult for businesses to invest, particularly in the North and the Midlands. Since 1990 when introduced they have shot up from 35p in the pound to 50p. That is unsustainable.

The British Retail Consortium found four in five retailers would close more shops unless their rates bill was cut. A new survey shows that three-quarters of Red Wall voters want to see bills cut to save local shops.

I am calling on the Chancellor to reduce business rates in his upcoming Budget to the levels we saw when they were first introduced.

Shops in constituencies across the country need levelling up, not boarding up, if we’re going to keep our “Red Wall” seats next time.