A political action committee aligned with progressive “Squad” members released an ad Monday targeting moderate  Democrats who say they won’t vote to advance their party’s $3.5 trillion spending plan until the bipartisan infrastructure bill passes – but the ad accidentally included a photo of a Republican.

A photo of Rep. Anthony Gonzalez of Ohio is featured among a group of moderate Democrats that the organization Justice Democrats – which helped elect Reps. Alexandria Ocasio-Cortez., D-N.Y., Cori Bush, D-Mo., and others – accuse of threatening to “tank the Biden presidency” in the ad.

But Anthony Gonzalez is a Republican and he isn’t a part of the group of nine moderate Democrats the ad goes after. Rep. Vicente Gonzalez, a Democrat from Texas, is a member of that group, however.

Justice Democrats told Fox News that it will fix the error before its “six figure ad-buy” officially goes live. The ads tell the moderate Democrats to “stop obstructing President Biden.” The error was first pointed out by Punchbowl News. 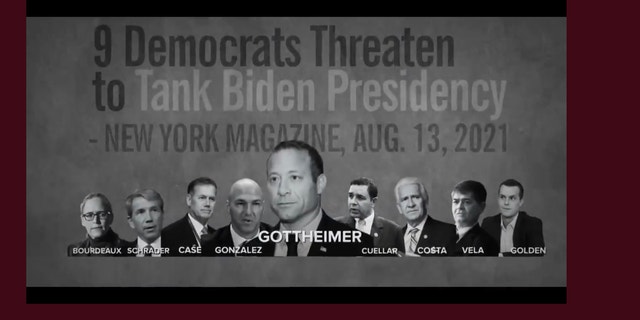 The threat made by Gonzalez of Texas – in a group led by House Problem Solvers Caucus Chairman Josh Gottheimer, D-N.J. – is nearly identical to threats from progressives supported by Justice Democrats. Progressives say they won’t vote for the infrastructure bill until the Senate produces a $3.5 trillion reconciliation bill.

Because the budget resolution is necessary to allow the Senate to pass a reconciliation bill – and circumvent a GOP filibuster – Democrats find themselves at a stalemate.

The White House has notably tried to stay out of the debate over how to pass the two major pieces of legislation, allowing congressional Democrats to sort that out amongst themselves. And moderates allege that the Justice Democrats crew is just as responsible for blocking the president’s agenda as anyone. 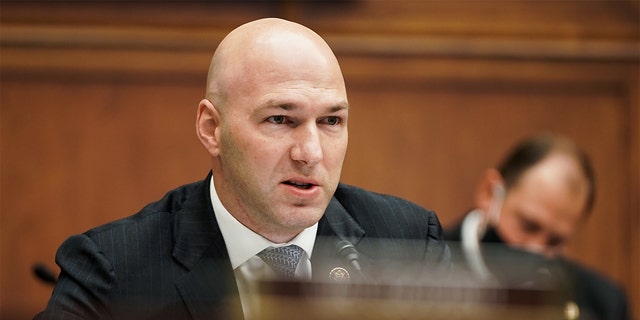 “The Justice Democrats are grifters, plain and simple. They are feigning support for President Biden when they attack he and Speaker Pelosi on a weekly basis. Congressman Cuellar raised and contributed substantial amounts of money tell President Biden get elected and has voted with the President a little over 97% of the time,” Colin Strother, a campaign spokesman for Rep. Henry Cuellar, D-Texas, said. “He supports the President and his agenda–which includes the bipartisan infrastructure bill.”

Cuellar is another one of the moderates targeted by the Justice Democrats’ ad buy, and the group called him out by name on Twitter Monday.

“The ad in question just goes to show that it’s amateur hour over there and they don’t really know what they’re talking about or believe it, they will just do and say anything to try and raise money to line their own pockets. They are a toxic influence in Democratic politics,” Strother added.

It’s not clear if the moderates plan to vote against the rule on Monday, though Gottheimer indicated to Punchbowl News last week that he does not. The rule is one procedural step short of final passage for the budget resolution.

The real test will be the vote on passing the budget resolution. If the moderate group holds together, it gas more than enough votes to tank the resolution, which would represent a significant setback for Pelosi and House progressives.