Larry Kudlow: Give credit to Manchin, Sinema for not wanting to spend and tax

FOX Business host Larry Kudlow weighs in on the future of Democrats’ social spending agenda as President Biden meets with the party’s progressive and moderate members.

A new video emerged Monday that showed Sen. Kyrsten Sinema, D-Ariz., being confronted by a woman who identified herself as a constituent who walked closely next to the senator, prompting Sinema to say, “Don’t touch me,” according to reports.

Sinema has been confronted in recent weeks by protesters displeased with her position on President Biden’s social services and climate change package. Earlier this month, the senator was followed into a bathroom by four protesters who recorded the incident. Arizona State University Police have since recommended charges against them.

Newsweek reported that the most recent confrontation marked the second time this month that the senator was confronted at an airport. The video shows a masked Sinema walking briskly with two men when the woman approaches her to walk next to her.

At one point, Sinema told the woman, “Don’t touch me.”

The woman responded, “I did not touch you.”

The senator otherwise ignored the woman, who accused her of not meeting with her constituents to hear their concerns about climate change.

“Every single year in Arizona, it’s getting hotter and hotter,” the woman said. “We’re breaking records … People are suffering. Your constituents are suffering. What are you going to do about climate change?” she asked. 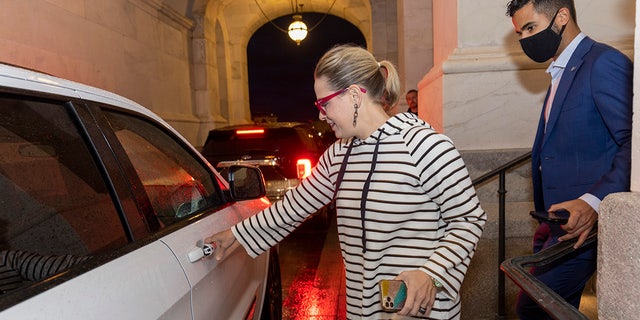 U.S. Sen. Kyrsten Sinema gets in her car outside the Capitol on October 25, 2021 in Washington, DC. (Photo by Tasos Katopodis/Getty Images)
(Getty)

Sinema’s office did not immediately respond to an after-hours email from Fox News.

Sen. Joe Manchin, D-WVa., and Sinema have almost on their own halted Biden’s massive proposal from advancing. With Republican opposition and an evenly split 50-50 Senate, Biden has no votes to spare and the two Democratic senators have insisted on reducing the size of the enormous package and pressed for other changes. 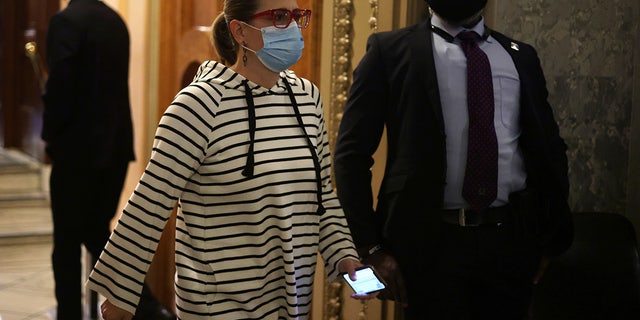 Democrats initially planned that Biden’s package would contain $3.5 trillion worth of spending and tax initiatives over 10 years. But demands by moderates led by Manchin and Sinema to contain costs mean its final price tag could well be less than $2 trillion.