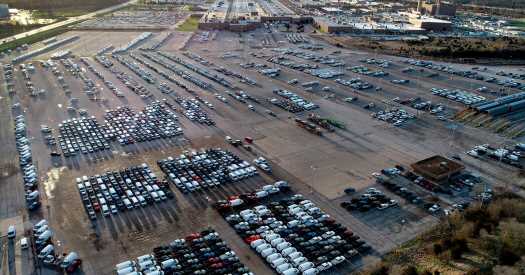 WASHINGTON — The Senate on Thursday was on the brink of passing expansive legislation to ramp up research and development into scientific innovation, advancing what would be the government’s first significant foray into industrial policy in decades in a bid to bolster competitiveness against China.

Powered by rising fears among members of both parties that the United States is losing its edge against China and other authoritarian governments that have invested heavily in developing cutting-edge technologies, the measure would pour about $195 billion into research in a host of sectors, including manufacturing and the semiconductor industry.

The broad support for the measure reflected a bipartisan sense of urgency to act amid a pandemic that has highlighted Beijing’s chokehold on critical supply chains, including a global semiconductor shortage that has shuttered American automobile factories and slowed the delivery of consumer electronics.

“If we don’t step up our game right now, we will fall behind the rest of the world,” said Senator Chuck Schumer of New York, the majority leader and an author of the bill. “That’s what this legislation is ultimately about. Righting the ship. Investing in science and tech so we can out-innovate, outproduce and outcompete the world in the industries of the future, some of which we know and some of which we don’t.”

The measure, the product of a collaboration between Mr. Schumer and Senator Todd Young, Republican of Indiana, came together as a series of political shifts have generated a rare moment of consensus on the issue.

Mr. Schumer, one of the Democratic Party’s most strident China hawks for decades, was personally determined to use his new status as the majority leader to push through legislation to counter Beijing. And a growing number of Republicans, following the lead of former President Donald J. Trump, have put aside what was once their party’s orthodoxy against government intervention in the economy and embraced the idea of aggressive measures to help American companies compete with a rising rival.

The legislation would prop up the struggling semiconductor industry by providing an emergency injection of funding for a $52 billion subsidy program while sinking hundreds of billions more into American scientific research and development pipelines, creating new grants and fostering agreements between private companies and research universities to encourage breakthroughs in new technology.

Still, it was unclear if the bill — whose popularity made it a magnet for industry lobbyists and lawmakers’ pet priorities — could accomplish its ambitious goals. A frenzied round of haggling watered down the legislation, slashing the amount of money for a concentrated hub for research and development into emerging technologies to $29 billion from $100 billion. Lawmakers instead shifted much of that funding to the National Science Foundation’s traditional mission of basic research, as well as laboratories run by the Energy Department, rather than the new technology initiative.

The measure also became weighed down by parochial projects inserted in a bid to win broader support, including a new round of funding for NASA with terms that are likely to benefit Jeff Bezos’s space venture, a prohibition on the sale of shark fins and a mandate for labeling the country of origin for king crab. At about 11 p.m. on Wednesday night, with almost no debate, the Senate added a section that would double the budget of the Defense Advanced Research Projects Agency, a Pentagon research agency.

Hours before the legislation was slated to pass, senators were still drafting major components, such as a major trade measure that would reauthorize a lapsed provision that allows for the temporary suspension of tariffs on specific products imported into the United States. It would also direct the United States trade representative to negotiate agreements on forced labor and critical minerals.

Mr. Young, who at a recent hearing made no secret of his disappointment with some of the changes to the measure, said in an interview on Thursday that the legislation still amounted to a “significant increase in funding that we will see for applied research.”

“We will be able to serve as a force multiplier in our efforts to counter China’s malign influence and activities,” he said.

Still, the legislation was buffeted by partisan squabbling at the last minute after Republicans, fearful that they would not have another opportunity to pass China-related bills and miffed by what they characterized as an overly speedy drafting process, demanded that Democrats incorporate more of their proposals.

In a closed-door luncheon on Wednesday, Republicans tried to persuade their colleagues to delay passage of the bill. Senator John Kennedy of Louisiana argued that the process should be slowed and took a jab at Mr. Schumer: The majority leader was moving so swiftly it was as if he was “running around like a 5-year-old in a Batman costume on Halloween,” Mr. Kennedy said, according to two people familiar with his remarks.

Democrats had allowed votes on more than a dozen Republican amendments, but the threat of a filibuster to block the legislation resulted in a last-ditch round of haggling behind closed doors, as leaders stretched out a 15-minute procedural vote by four hours.

The strong Republican support for the bill — particularly around the decision to send $52 billion to chip makers, funding a program that Congress created last year — was a paradigm shift in the party, with ascendant China hawks in Congress increasingly backing federal interventions to shore up American manufacturing.

Senator Marco Rubio, Republican of Florida, took to the Senate floor before the vote and praised the results that “the partnership of government and business to solve an urgent crisis of national concern” had yielded during the pandemic, citing the quick development of vaccines.

“When it comes to research development technology, that’s perhaps the greatest requirement ahead of us,” he said. “The 21st century is going to be defined by this competition between China and the United States, and it’s a competition we simply cannot win unless we step forward and match it.”

Mr. Rubio tried on Thursday to add tougher counterintelligence measures to the legislation, warning that it would be futile to spend billions of dollars on research “if we’re going to allow the Chinese to steal it.” But that measure failed to garner the 60 votes required to be added to the bill.

In a drive to connect manufacturing hubs and research universities across the United States, the legislation would allocate $10 billion for the creation of regional technology hubs, intended to bolster public-private partnerships and support up-and-coming researchers and other workers.

“America’s technology-based economy needs all types of skilled professionals, and the E.F.A. will make sure that we have them,” the Institute of Electrical and Electronics Engineers, a group that had lobbied for the legislation, said in a statement, using the acronym for the Endless Frontier Act.

The bill also provides a foreign policy road map for future engagement with China. It calls on the Biden administration to impose sanctions on those responsible for forced labor practices in and around Xinjiang, as well as the campaign of systemic rape and forced sterilization perpetrated by the Chinese government against the Uyghur minorities in the region.

That legislation, approved by the Senate Foreign Relations Committee, includes measures to counter intellectual property violations and calls for a diplomatic boycott of the 2022 Winter Olympics in Beijing.