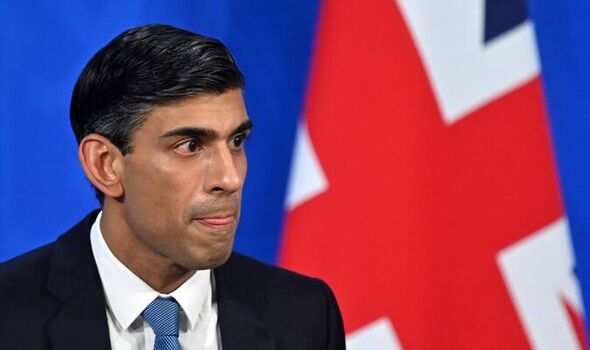 Campaign groups claimed thousands of older people “will be at risk” in the winter and they urged Rishi Sunak to take action. The boss of E.On predicted 40 per cent of his customers may be in fuel poverty by October and described the price rises as “unprecedented”. Michael Lewis, its chief executive, urged the Government to intervene and “tax those with the broadest shoulders”.

One major charity begged ministers to launch a rescue package as calls grew for a windfall tax on big profits maded by oil and gas producers.

He said 20 per cent of his customers are in fuel poverty – meaning they spend more than a tenth of disposable income on energy – and that is expected to double to 40 per cent when the cap rises.

Around one million of eight million E.on accounts are in arrears already and that toll is expected to rise by 50 per cent in the autumn.

Mr Lewis said: “In my 30 years in the energy industry I’ve never seen prices increasing at this rate.”

He warned: “We do need more intervention in October and it has to be very substantial.”

The government is under pressure to introduce a windfall tax on energy firms that have recorded soaring profits to help fund support for struggling bill payers.

But the Cabinet is divided on the measure and campaigners also are mixed on whether it would work.

Downing Street insiders said “no decision is imminent” and there was a “range of opinions” across the Conservative party.

The source said ministers are looking at a “lot of options” and it was still “early days”.

Caroline Abrahams, Charity Director at Age UK, told the Express: “Everyone now seems to agree that the Government needs to do more to help people on low and modest incomes cope with soaring prices – except Ministers themselves – and that’s a crying shame.

“At Age UK we are hearing from many pensioners who are struggling to buy everyday things and live their normal lives, because they are so hard up, and we are extremely concerned for their welfare as inflation continues to increase.

“I implore Ministers to listen to their constituents and to organisations like Age UK and quickly bring forward a package of measures to support those who need it most.

“This must include pensioners living on low fixed incomes as well as people of working age who are dependent on benefits to make ends meet. Both groups are falling further and further behind and the obvious solution is to raise the State Pension & benefits in line with the rising cost of living.

“We cannot cast adrift those with the least money coming in, but that’s effectively what’s happening at the moment and it is profoundly unfair.”

He said: “If you apply a windfall tax, they will probably have to reduce or take away their dividend. Who receives the dividend? Pensioners through their pension funds.

“Investment has to be real, which is what I think Rishi (Sunak) will demand of all these companies and to see a roadmap towards that investment. We’re not taking any options off the table.”

The National Pensioners Convention said a windfall tax was not a silver bullet because it is a one-off and takes time to filter through when the help is needed now.

General secretary Jan Shortt (CORR) said a much better solution would be to reinstate the full value of the triple lock at inflation level.

“It is no good Rishi Sunak talking about ‘later in the year’ and certainly not next year – support is needed now and he must come up with a plan that ensures everyone gets the help they need,” she added.

“Tax cuts do not help the majority of pensioners whose income is below the tax threshold – it serves to help those who already have wealth.

“Those who have always managed before are now seeking help because they are struggling to get by and it will only get worse as time rolls on.”

Labour’s Lord Foulkes, Co-Chair of the All-Party Parliamentary Group for Older People, said Mr Zahawi’s warning on the impact a windfall tax would have on pensions was a “false scare”.

“The oil and gas companies have already said they can afford a windfall tax without any effect on their investment or profits.

“Indeed pensioners could actually benefit from a windfall tax if it is used to increase benefits and restore the triple lock on pensions.”

Dennis Reed, Director of Silver Voices, said the impact of a windfall tax on people with large private pensions would be “very small”,

He added: “Older people, together with other poor households, are increasingly using food banks to survive the crisis and make hard choices on eating, heating, washing and lighting on a daily basis. Thousands of older lives will be at risk this winter unless radical action is taken.”

Shadow Chancellor Rachel Reeves said: “These comments underline how tough the cost-of-living crisis is for families, and how Conservative delays will see the situation get even worse.

“The Government must act now, by bringing in a windfall tax on oil and gas producer profits to cut bills.”

Mr Sunak is said to be considering a windfall tax that imposes a lower levy on energy firms that spend billions investing in infrastructure.

BP recorded a £5 billion profit in the first quarter of this year and Shell made £7.3 billion.

That would help the UK decarbonise to protect against climate change and also improve domestic energy resilience, the International Trade Secretary added.

“The windfall tax is a very short-term measure,” she said. “What we want is to ensure we can both stabilise and gain more resilience to our energy systems, and really it’s the energy companies who are able to do that at pace, so that’s what we want to be encouraging them to do.”

Nadhim Zahawi’s comments implying that pensioners would suffer from a windfall tax on the excess profits of the energy giants, are facile and insulting.

If this is the best the Government can do, when millions of older people are crying out for an emergency rise in the state pension, then it shows how out of touch ministers are with the scale of the crisis.

Energy companies and their shareholders will already have priced in the possibility of a windfall tax on their unexpected profits, and the impact on dividends of such a necessary tax is likely to be tiny.

In any event, older people with large private pensions are not those who are suffering most from rampant inflation.

Where was Mr Zahawi’s concern for the plight of millions of senior citizens who rely on the state pension for their main source of income?

Because of the decision to suspend the Triple Lock, state pensioners received the grand increase of 3.1 per cent last month, with inflation running at three times that rate.

Older people, together with other poor households, are increasingly using food banks to survive the crisis and make hard choices on eating, heating, washing and lighting on a daily basis.

Thousands of older lives will be at risk this winter unless radical action is taken.

We have no sympathy for the energy giants coining in billions of pounds in profits. They must make a contribution to support poorer households through this crisis.

Mr Zahawi’s blustering reveals the absence of ideas in Whitehall to meet the scale of the challenge facing the country.

Hundreds of billions of pounds were rightly spent on supporting businesses through the pandemic. We now need a similar level of support for older people and low-income households to prevent millions falling into poverty.

Energy companies must help pay for this support package.