Protect our veterans or resign by Christmas, Brandon Lewis told 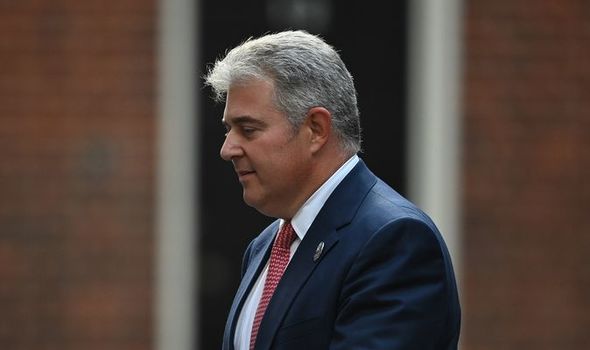 Mr Lewis pledged in July that legislation would be introduced “by the end of the autumn” but Mr Francois is concerned that no Bill has been introduced to ensure that ageing members of the armed forces who served during the Troubles are not hauled before the courts. The Northern Ireland Secretary admitted this week that the autumn deadline had been “missed”. However, a Northern Ireland Office source insisted that the plan is still to introduce the legislation before Christmas.

The proposals to introduce a statute of limitations to end prosecutions for “Troubles-related incidents” before 1998 are opposed by both the DUP and Sinn Fein as well as victims’ organisations. However, in August the plan was backed by the Northern Ireland Veterans Movement (NIVM) which was launched to stop the “persecution and prosecution” of soldiers who served on Operation Banner between 1969 and 1999.

Conservative MP Mr Francois said: “The Conservative Party promised to bring in legislation to end this iniquity in its 2017 General Election manifesto and again in 2019 – but still there is no Bill from the Northern Ireland Office. Our hapless Northern Ireland Secretary, Brandon Lewis, promised concerned Tory backbenchers we would see legislation by the summer recess in July 2021 – and then completely failed to deliver it.

“He then promised it would appear in Parliament ‘by the end of the autumn’ – yet we are now in December and still nothing.

“The House of Commons rises for the Christmas recess on Thursday, December 16, less than a fortnight from today. The future business has already been announced out to December 13, which now leaves a remaining three day ‘window’ at the end of the year.

“If, yet again, Brandon Lewis breaks his solemn word to the Commons he is likely to face growing calls to resign.”

Another Conservative MP said: “I think they are bluffing and it will not appear.”

But another Tory MP criticised Mr Francois’s intervention, saying: “This is an incredibly complex and sensitive issue and sniping from the sidelines does nothing to deliver for the victims and veterans of the Troubles, something I know Brandon remains resolutely committed to.”

A UK Government spokesman said: “As set out in the Queen’s Speech, the Government will bring forward legislation in this session to deal with addressing the legacy of the past in Northern Ireland. The Government is absolutely committed to addressing legacy issues comprehensively and fairly, and in a way that supports information recovery and reconciliation, and responds to the needs of all those affected by the Troubles.

“The Government remains committed to introducing legislation as soon as possible.”