Once Close Allies, Roberts and Alito Have Taken Divergent Paths

Chief Justice John G. Roberts Jr. and Justice Samuel A. Alito Jr. have become emblems of a stark divide at the Supreme Court as it confronts whether to overturn Roe v. Wade. 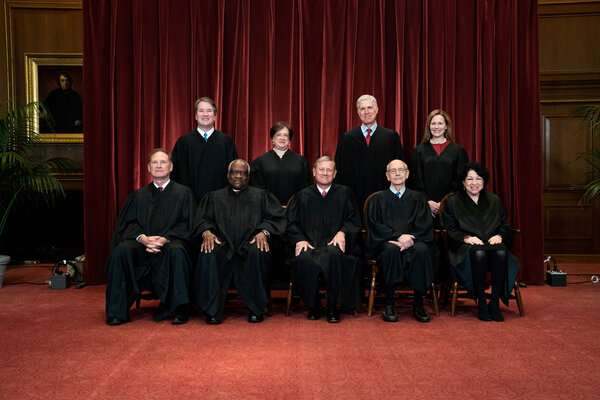 WASHINGTON — There was a time when Justice Samuel A. Alito Jr., the author of the leaked draft opinion on abortion that rocked the nation on Monday night, was Chief Justice John G. Roberts Jr.’s closest ally on the Supreme Court.

The two men are both products of the conservative legal movement, and they were named to the court by President George W. Bush within months of each other. Their voting records were initially indistinguishable. Indeed, when the chief justice had a particularly difficult case, he would often assign the majority opinion to Justice Alito.

“For their first decade on the court together, the chief clearly generally viewed Justice Alito as a colleague upon whom he could rely to craft the kind of narrowly reasoned opinions for the court necessary to maintain a bare five-justice majority,” said Richard J. Lazarus, a law professor at Harvard. “And the chief rewarded Alito with prime opinion assignments in some of the court’s biggest cases, notwithstanding Alito’s formal status as a junior justice.”

But the dynamics and alliances at the court have shifted, especially after the death of Justice Ruth Bader Ginsburg and her replacement by Justice Amy Coney Barrett.

Once partners, Chief Justice Roberts and Justice Alito are now emblems of a stark divide at the court as it confronts a crucial choice: whether to eliminate the constitutional right to abortion entirely in a case challenging a Mississippi law that bans the procedure after 15 weeks of pregnancy.

“Justice Alito now appears to have concluded he no longer needs the chief to receive coveted opinion assignments,” Professor Lazarus said. “And, buoyed by a five-justice conservative majority to the right of the chief, Justice Alito has apparently concluded, as underscored by his first draft opinion in the Mississippi abortion case, that he can now swing for the fences using the broadest language possible.”

The two men have been moving in different directions for years, said Lee Epstein, a law professor and political scientist at Washington University in St. Louis.

“They initially marched in ideological lock step, seemingly trusted allies,” she said. “But over time Roberts drifted to the left and Alito drifted way to the right, leaving a gaping hole between them.”

That gaping hole grew into a chasm in the case challenging Roe v. Wade, the 1973 decision that established a constitutional right to abortion. Chief Justice Roberts, an institutionalist committed to an incremental approach, has signaled that he wants to limit Roe’s reach without destroying it in a single blow. Justice Alito, based on his draft opinion, wants to reduce Roe to rubble.

What accounts for the schism? It is partly a matter of temperament.

Chief Justice Roberts is witty, canny and controlled. Justice Alito can be awkward and aggrieved, although he is capable of wry and rueful humor.

Justice ideology based on Martin-Quinn scores.