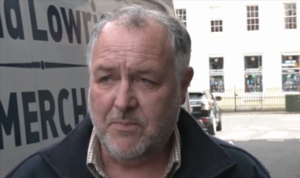 Scottish voters have continued to turn against First Minister Nicola Sturgeon over her refusal to scrap coronavirus restrictions for Scottish people, despite British Prime Minister Boris Johnson rolling back on them months ago.

Reporter Davie Donaldson took to the streets of Scotland to speak with locals about what they are considering leading up to the electoral vote.

Mr Donaldson spoke to various Scots, one man who claimed taxes on holiday homes in the area were his main focus, as he believes prices need to go down for local people in the area to enjoy them too.

Another Scottish man discussed the coronavirus restrictions, comparing them to England.

One Scottish man told GB News: “We have a big lack of small industrial units.

“It’s really strangling business, we have a huge amount of holiday homes, that we need to somehow get the holiday homes taxed so they get the prices down for local people.

“So local youths can actually stay in the area.”

Another Scottish man added: “The coronavirus and that, just the agenda that the… You know the wearing of face masks and that… Could have been brought in line with what was happening in England and all the rest.

“You know, it seemed to be that Nicola Sturgeon just seemed to keep it going and going.

“And we were the last people to lose the face masks.” He added

Mr Donaldson said: “That’s what the people have Dunbar are looking for, but just along the motorway is the market town of Harrington.

“It was once the fourth largest town in Scotland in the high middle ages and is steeped in cultural history.

Shanghai: Residents break out of home amid extended lockdown

Mr Donaldson added: “These local people told me what action they want to see, taken by councillors.”

A Scottish Woman said: “I would like to see an improvement in the high streets, in just about every town I think in East Lothian.

“Big support for that, also with the roads that would be… I just realised I’ve got a rip in my tyre from a pothole I imagine.

“Support for the NHS, because actually I’m a retired nurse and I know it’s been pretty awful for them, and I suppose schools as well teachers….”

Other Scots have been questioning Ms Sturgeon over the cost of living crisis.

Mr Sarwar said: “Energy bills are up, fuel prices are up and the weekly shop is more expensive than ever.

“Neither the SNP nor Tory governments are doing anything to help. In fact, they are making it worse.

“Across the UK, the SNP and Tories refused to back a windfall tax on the oil and gas giants making record profits.

“Here in Scotland, Nicola Sturgeon has hiked rail fares and water charges and replicated the Rishi Sunak plan of giving families less than £4 a week.

“These figures clearly show that Scots can see through the SNP’s shameful attempt to use this crisis as an opportunity for a constitutional argument, rather than use their powers to act.

“While thousands of Scots are now being forced to choose between heating and eating, they are being failed by two out of touch governments.”