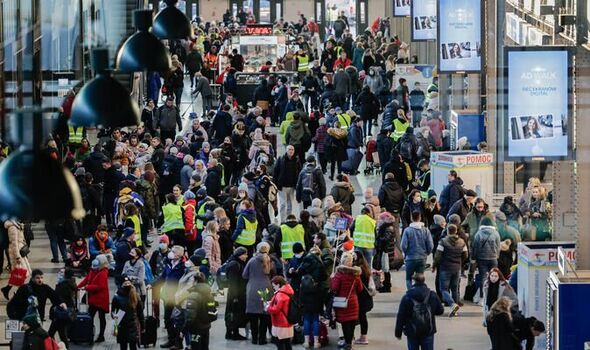 Conservatives joined a furious backlash in the Commons as ministers admitted the response to the humanitarian crisis has been too slow. There are claims that hundreds of desperate people who want to seek safety in Britain are being sent away from the French port, and told to go to Paris or Brussels to make an application. So far, only 500 refugees have been handed visas out of almost 10,000 applications.

Boris Johnson has said the UK could welcome 200,000 Ukrainians fleeing the Russian invasion.

But Former immigration minister Mark Harper said the Home Office needs to “grip the pace of this”.

And Tory MP Alec Shelbrooke blasted: “We want dates, we want action and the Home Office must react far more quickly than it’s doing and get to the point of hubs of people, get them processed and get them in.

“This is a disgrace.”

The site in Lille was chosen because of its Eurostar link and because it is away from the people-smuggling gang problems in Calais.

Refugees stranded in Calais will be offered transport to Lille.

Britain also has visa processing sites in Poland, Hungary, Romania and Moldova which will handle the bulk of the applications.

It has been confirmed that military personnel will help the Home Office to speed up the visa application process.

Mr Johnson told ministers that the Government would be “as generous as we could” to Ukrainian refugees.

The Prime Minister made the comments at Tuesday’s Cabinet meeting, where Ms Patel updated her colleagues on the “extra resources” being put in to address the crisis.

Mr Johnson “said he would do all that he could to support the country and this includes continuing to provide Ukraine armed forces with defensive lethal aid and equipment”, while the UK was also the “largest humanitarian donor”, his spokesman said.

“The Prime Minister said that we would be as generous as we could in our support to Ukraine refugees and the Home Secretary set out the extra resources we’re putting in place into processing visas for those Ukrainians who have been forced to flee,” the spokesman added.

Former government minister Richard Harrington has been appointed as the Minister for Refugees, Downing Street has said.

Mr Harrington, who stood down as a MP at the 2019 general election, will be made a life peer sitting in the House of Lords.