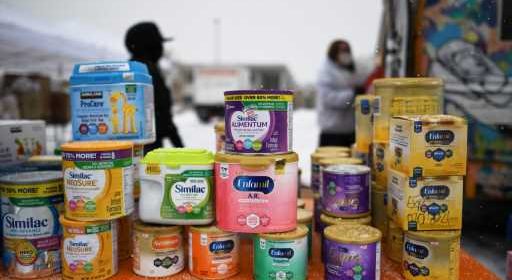 For three days in September 2019, Kristina Fedran struggled without a breast pump in jail, saying she repeatedly asked for help.

She was not only nursing but pregnant when she was booked into the Adams County jail on domestic violence charges that were ultimately dismissed. Fedran, 37, said her breasts leaked milk until she was no longer able to produce any.

“It broke me,” she said, “because I knew I wasn’t going to be able to feed my son again. But it also took his nutrition and his bonding away, which has resulted in a lot of different things. … There’s no time that I can get back. I can’t jump-start nursing again. I can’t make it all go away.”

A new law signed by Gov. Jared Polis this month, SB21-193, would add protections for jailed and imprisoned people who are pregnant and postpartum, including a requirement to create opportunities for women to maintain contact with newborn children and receive breastfeeding support.

Maternal health is the focus of three new Colorado laws that take effect in September — the other two being SB21-101 and SB21-194. Democrats believe they’ll help address racial disparities, improve health outcomes and reduce the number of people who die during pregnancy and up through a year after having a child.

Polis also signed SB21-027, immediately creating a two-year statewide diaper distribution program so families in need can get diapers and related essentials (a need that continued to grow during the pandemic).

A Colorado Department of Public Health and Environment committee studied causes of pregnancy-related deaths in the state between 2014-2016, and made recommendations last year that led to the new laws — which themselves will require continued reporting and research on the topic.

Shivani Bhatia, who oversees the CDPHE Maternal Mortality Review Committee, said maternal mortality is a key indicator of overall health during pregnancy and afterward. She also said it’s an issue that creates a “cascade effect,” that is, when you work to eliminate preventable deaths and reduce mortality rates, people’s health improves during pregnancy and after birth.

“Maternal mortality is such a complex issue and complex topic, it is very rarely a case of something singular going wrong. … What that means is that there’s opportunities throughout the system and throughout both the health care system as well as the public health systems to support reducing maternal mortality and improving maternal health equity,” Bhatia said.

The leading cause of the pregnancy-associated deaths in Colorado (that were not related to medical conditions during pregnancy) were suicides, followed by accidental overdoses, according to the report. Mental health or substance use contributed to almost six in 10 deaths.

People of color and those from low-income families faced worse maternal health outcomes during pregnancy and after birth, according to the CDPHE report. Indigenous people were 4.8 times more likely to die than non-Indigenous women who gave birth in 2014-2016, the report stated. Additionally, people who died were more likely to have had public health insurance like Medicare, Medicaid or Tricare.

Colorado’s racial inequalities in maternal health were not tied to biological differences, the report noted, but to structural problems related to availability of resources and opportunities, as well as implicit bias that affects quality of care.

SB21-193, which is aimed at addressing inequities, will require hospitals to honor pregnant patients’ decisions about what they want to happen if they’re unable to make that decision — just like hospitals do for a nonpregnant person (pregnant people were previously excluded). It also adds protections for pregnant people and those who are postpartum in correctional facilities, and requires the state’s civil rights commission to accept reports about any type of mistreatment during pregnancy and after.

SB21-194 will require insurers to reimburse hospitals for labor service and delivery costs, regardless of the type of provider or facility. It also expands Medicaid coverage for women a full year after having a child, rather than 60 days after birth.

Fedran, the woman who was nursing when incarcerated, believes she wouldn’t have struggled as much in the Adams County jail if Colorado had a law like SB21-193 at the time.

The Adams County Sheriff’s Office didn’t comment directly on what happened to Fedran, but the agency has policies on how to treat pregnant people (directed by the jail’s medical provider), sheriff’s office spokesperson Sgt. Adam Sherman said. However, it does not have specific policies for those who are nursing or pumping. Instead, he said, they are handled on a case-by-case basis and follow the recommendations of the nurse.

The third major pregnancy-related bill signed into law is SB21-101, which extends the state’s midwife program and registration requirements and expands the medications midwives can provide. GOP Rep. Dave Williams of Colorado Springs sponsored this alongside Democrats.

Demetra Seriki has worked in Colorado Springs for six years and said she has been the only Black certified professional midwife registered in Colorado since they received legal recognition from the state in 1993. Her focus has been in communities of color and LGBTQIA families who often face poorer outcomes.

“A very common complaint when people … transfer to my care is, ‘My provider didn’t believe me in my previous pregnancy,’ or they were currently pregnant and felt like they were not receiving the same care that their counterparts were receiving,” she said.

She believes the new laws will help marginalized communities during and after pregnancy who have often been left behind.

Indra Lusero, founder and director of Elephant Circle, an intersectional feminist group focused on birth justice, advocated for all of the maternal health bills, which they said are among the first of their kind in the nation.

Not only do the laws remove barriers and increase access to midwives, they said, but the laws also create accountability.

“I hope that these bills counteract the mistreatment and disrespect that people experience,” Lusero said.