Liz Cheney Is Defeated by Trump-Backed Harriet Hageman in Wyoming 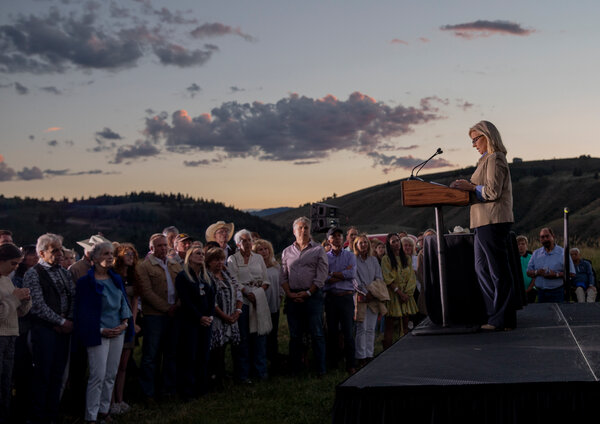 JACKSON, Wyo. — Representative Liz Cheney of Wyoming was decisively defeated by Harriet Hageman in her Republican primary on Tuesday, handing Donald J. Trump his most prized trophy yet in his long campaign to purge the Republican Party of his critics.

Ms. Hageman, a lawyer in Cheyenne, was lifted by Mr. Trump’s endorsement in her race against Ms. Cheney, the daughter of a former vice president and former member of the House Republican leadership.

Ms. Cheney’s loss was as anticipated as it was consequential. The leading Republican voice against Mr. Trump, and vice chairwoman of the committee investigating the Jan. 6 Capitol attack, next year will no longer have her perch in Congress from which to battle a figure she believes poses a grave threat to American democracy.

Ms. Cheney conceded defeat just as The Associated Press called the race, suggesting she was setting a model for accepting the will of voters.

“Harriet Hageman has received the most votes in this primary — she won,” Ms. Cheney told supporters gathered outdoors on a ranch here. She went on to implore Americans to stand up to Mr. Trump and others who deny his loss in the 2020 presidential election. “No citizen of this republic is a bystander,” she said, adding: “We cannot abandon the truth and remain a free nation.”

But the repudiation of Ms. Cheney made clear Republican primary voters’ frequent willingness to reject officeholders who openly and aggressively confront Mr. Trump, even as the former president remains embroiled in multiple investigations. Just two of the 10 House Republicans who voted to impeach Mr. Trump last year will advance to the general election this fall.

None of those 10, however, had the stature of Ms. Cheney, the daughter of former Vice President Dick Cheney.

Her loss, two months after George P. Bush’s landslide defeat in a bid for attorney general in Texas, represents the full and perhaps final transition of the G.O.P. from the traditional conservatism of the Bush-Cheney era to the grievance-oriented populism of Mr. Trump.

Other contests held Tuesday would reveal the extent of that transformation. In Alaska, Senator Lisa Murkowski, another daughter of local political royalty and one of seven Republicans to vote to convict Mr. Trump of incitement of insurrection, is in a re-election fight against a field led by Kelly Tshibaka, a Republican and former state official whom Mr. Trump endorsed.

Alaskans were also deciding whether to embrace a comeback for former Gov. Sarah Palin, the onetime vice-presidential nominee whose slashing attacks on the media presaged Mr. Trump’s rise. Ms. Palin is running both in a special election runoff for a House seat and in a primary for a full term of her own. The state’s system of ranked-choice voting allows the top four finishers in the primaries to move on to the general-election ballot in November. Results in those races were not expected Tuesday night.

Ms. Cheney has vowed to continue her fight against the former president, casting the primary as only one front in a longer political war in which she’s determined to prevail.

Focused almost entirely on the Jan. 6 panel, and reluctant to campaign publicly while facing death threats and venomous criticism, Ms. Cheney has long been resigned to her political demise in the state that elevated her father 44 years ago to the seat she now holds. She has set her sights beyond Wyoming, arguing that blocking Mr. Trump’s return to the White House is her most important task, a mission that has fueled speculation that she’s considering a presidential bid.

Ms. Cheney delivered her concession speech in measured tones, speaking as if she was on the Jan. 6 committee rostrum in the Capitol rather than standing in front of bales of hay at a ranch in the shadow of the Teton Mountains. She hinted at a potential presidential bid, or at least a grass-roots and bipartisan effort, to block Mr. Trump’s comeback, as she extended a hand to Democrats and independents.