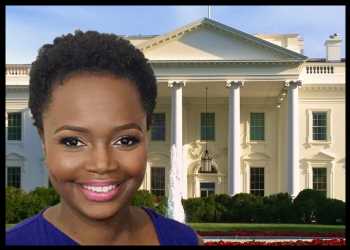 President Joe Biden has named Karine Jean-Pierre as the new White House Press Secretary. She will be the first Black woman and the first openly lesbian person to serve in this role.

Karine, who has been White House Principal Deputy Press Secretary since Biden was elected, will replace Jen Psaki as she departs from the White House on May 13.

She brings more than two decades of experience in Democratic politics to the role.

Having served in communications and political roles on many campaigns, including for former President Barrack Obama, Karine is a longtime advisor to President Joe Biden.

Born on the French Caribbean island of Martinique, 44 year-old Karine served as chief of staff to Kamala Harris before joining the White House press team.

While press secretaries do not set policy, they represent a presidential administration’s face to the media.

A longtime LGBTQ+ activist, Kerine was the senior advisor and national spokeswoman for MoveOn.org and a political analyst for NBC News and MSNBC. She is also a former lecturer in international and public affairs at Columbia University.

Biden said in a statement that Karine will be a strong voice speaking for him and his Administration.

Thanking the outgoing Press Secretary Jen Psaki for her service to the country, Biden said she set the standard for returning decency, respect and decorum to the White House Briefing Room.

The White House also announced the return of Anita Dunn as a Senior Advisor and Assistant to the President.

Dunn rejoins the White House staff from her communications and political consulting firm SKDK, and will assist in advancing the President’s policy and communications objectives.