Is Alex Jones' bankruptcy filing a legitimate move? One legal analyst weighs in

New York (CNN Business)The parents of a child who was murdered during the 2012 Sandy Hook shooting delivered emotional testimony in a Texas court on Tuesday, telling a jury that the lies pushed by right-wing conspiracy theorist Alex Jones have stained the legacy of their son and tormented them for years.

The jury hearing the case will determine how much in damages Jones will have to pay the parents, Neil Heslin and Scarlett Lewis, who won a default judgement against him earlier this year. An attorney representing Heslin and Lewis asked the jury last week to award Heslin and Lewis $150 million.
Fighting back tears at times, Heslin told the jury that Jones, through his conspiratorial media organization Infowars, “tarnished the honor and legacy” of his son. Heslin said that he couldn’t “even begin to describe the last nine-and-a-half years of hell” he has endured because of Jones.

“There’s got to be a strong deterrent that shall prevent him from peddling this propaganda,” Heslin said, adding that through his testimony he wanted “to restore my credibility, my reputation, and Jesse’s legacy that he so much deserves.”

As Heslin testified, a television screen in the court showed a photograph of his murdered son, six-year-old Jesse Lewis. Jones, who is expected to testify in his own defense later on Tuesday, was absent from the courtroom during Heslin’s testimony and the first part of Lewis’ testimony. Heslin called that absence “a cowardly act.”

“I’ve been here for a week and a half and [during] my final testimony Mr. Alex Jones does not have the courage to sit in front of me or face me,” Heslin said.
An attorney representing Heslin and Lewis told CNN the two have needed to be in isolation and under the protection of professional security during the trial.

Heslin also said on the stand that the lie pushed by Jones “resonates around the world” and that he has realized “how dangerous” it is.
Heslin described being repeatedly confronted by those who believed Jones over the last ten years, saying such interactions occur “right up to this day.”
“My life has been threatened,” Heslin said. “I fear for my life. I fear for my safety and my family’ safety and their life.”

In a remarkable moment in court, Lewis directly spoke to Jones, who was in the courtroom after the trial broke for lunch. She said that she wanted to address Jones to his face.
“Jesse was real,” Lewis told Jones. “I’m a real mom.”
Lewis told Jones that she thinks he didn’t actually believe the lies he pushed about Sandy Hook.
“That’s the problem, I know you know that,” Lewis told Jones. “But you keep saying it. Why? Why? For money?”
Lewis said that “having a six-year-old son shot in the forehead” while at school is an “unbearable pain.”
“And then to have someone on top of that perpetuate a lie that it was a hoax, that it didn’t happen, that it was a false flag, and that I was an actress — You think I’m an actress?” Lewis asked.
Lewis told the jury that monetary damages were appropriate in the case because she doesn’t believe Jones will ever stop.
“There has not been a sincere apology,” she said. “But if there was, ever, I liken it to being in a car accident and you run over someone and cause tremendous bodily damage and you look at that person lying on the ground and say, ‘I’m so sorry, I’m so sorry, I’m not accountable for any of the damage I just caused. But I’m sorry.’ That’s how I see it.”
Regardless, Lewis said that she does not believe Jones understands the repercussions “of going on air with a huge audience and lying and calling this a hoax.”
“It seems so incredible to me that we have to do this,” Lewis told Jones. “That we have to implore you — not just implore you, punish you — to get you to stop lying…It is surreal what is going on in here.”
Lewis also testified in court that she has been harassed and received death threats, including at her own home, all of which she said reopens the wounds surrounding her son’s murder.
“The fear and anxiety and unsafeness … keeps me from healing,” Lewis said. “It definitely negatively impacts the healing process.”
Lewis described the conspiracy theories about Sandy Hook as “deeply unsettling.”
“I feel compromised,” Lewis said, describing how she feels about her own personal safety.
Roy Lubit, a forensic psychiatrist who was hired to conduct an examination of Heslin and Lewis, testified to the court on Monday how terrified and worried for their personal safety the two parents are. 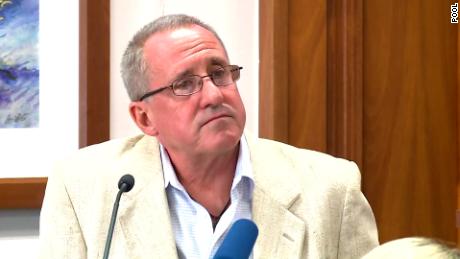 Lubit told the court that Lewis and Heslin “are very, very frightened.” When asked to specify who they are frightened of, Lubit responded, “Some follower of Jones trying to kill them.”
Lubit elaborated that Lewis sleeps with a gun, a knife, and pepper spray on her night stand. Lubit added she won’t even turn on the air conditioning during hot days for fear of not being able to hear an intruder possibly coming to hurt her.
Lewis testified Tuesday that she owns a gun to keep her other son safe, telling the jury that she failed to keep one son safe and will do everything in her power to ensure that no harm happens to her other child.

‘This is not your show’

Jones took the stand in the afternoon, telling the court he felt “good” because he was being afforded the opportunity to push back against the plaintiffs and news media.
From the stand, Jones told Heslin and Lewis, “I never intentionally tried to hurt you.”
Jones said “the internet had a lot of questions” about the Sandy Hook shooting, and so did he. Jones argued he simply had “tried to find out what actually happened.”
After the jury had left the courtroom following Jones’ testimony, Mark Bankston, the attorney for the plaintiffs, accused Jones and his attorney, Federico Andino Reynal, of trying to “poison” the trial. Bankston said that they would file a motion for sanctions against both Jones and Reynal.
Bankston specifically said Jones broke court orders when he attempted to discuss his net worth from the stand.
“Mr. Jones just intentionally did that in violation of your order to attempt to poison this compensatory damage verdict to try to tell this jury that he’s broke, and he’s not, and that’s in violation of your order,” Bankston said to the judge.
Judge Maya Guerra Gamble said she will hear any motions officially filed for sanctions against Jones and Reynal after the conclusion of the trial.
But Gamble admonished Jones for his behavior and said he had already violated his oath to tell the truth twice.
“Mr. Jones, you may not say to this jury that you complied with discovery. That is not true. You may not say it again. You may not tell this jury that you are bankrupt. That is also not true,” Gamble said.
“You are already under oath to tell the truth,” Gamble added. “You’ve already violated that oath twice today, in just those two examples. It seems absurd to instruct you again that you must tell the truth while you testify. Yet here I am again.”
“This is not your show,” Gamble added.
Jones attempted to tell Gamble that he believed he was telling the truth.
“You believe everything you say is true, but your beliefs do not make something true,” Gamble said. “That is that is what we’re doing here. Just because you claim to think something is true does not make it true. It does not protect you. It is not allowed. You’re under oath. That means things must actually be true when you say them.”

Jones has lashed out at the judicial proceedings taking place, baselessly claiming last week that he was being tried in Texas before a “kangaroo court.” Infowars has also published content attacking the judges overseeing the cases in viscous terms.
Jones’ media company, Free Speech Systems, which is the company that operates Infowars, filed for bankruptcy protection on Friday.
Jury selection for a similar trial involving Jones and Sandy Hook families commenced on Tuesday in Connecticut, where Jones was also found liable for damages earlier this year. But jury selection was suspended after Jones’ attorneys filed documents in federal court to remove the case for now due to Free Speech Systems’ bankruptcy filing.
Attorneys representing some Sandy Hook families have accused Jones of having drained Free Speech Systems of assets in recent years as part of an effort to protect himself from potential judgements he may be ordered to pay.
One of the attorneys, Avi Moshenberg, told CNN on Tuesday that the bankruptcy filing made by Free Speech Systems indicated that $62 million in assets had been withdrawn from the company in 2021 and 2022.
“If you look at the bankruptcy filing, leading up to the declaration of bankruptcy, Alex Jones, the sole owner [of Free Speech Systems], took $62 million in draws in 2021 and 2022,” Moshenberg told CNN. “Just straight up draws. That’s why the company has few assets.”

A lawyer representing Jones did not immediately respond to a request for comment on Tuesday morning. But a hearing is scheduled on Wednesday in which W. Marc Schwartz, the chief restructuring officer for Free Speech Systems, is expected to testify.
CNN’s Sonia Moghe contributed to this report.
Source: Read Full Article