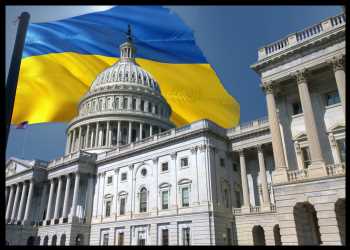 The US House of Representatives passed with broad bipartisan support a bill to provide more than $40 billion in emergency funding in security, economic, and humanitarian assistance to Ukraine battling Russian invasion.

The Additional Ukraine Supplemental Appropriations Act, 2022 was approved in the House by a vote of 368-57.

The Senate will next take up the measure, and is likely to approve it, reports say. On Monday Biden uhad rged Congress to approve the Ukrainian Supplemental funding bill immediately.

The President had earlier recommended that Congress take overdue action on much needed funding for COVID treatments, vaccines and tests, as part of the Ukraine Supplemental bill. But Congressional leaders in both parties informed him that such an addition would slow down action on the urgently needed Ukrainian aid – a view expressed strongly by several Congressional Republicans.

Biden said that since his administration cannot afford delay in this vital war effort, he is prepared to accept that these two measures move separately, “so that the Ukrainian aid bill can get to my desk right away.”

“We look forward to continuing to work with Senate leadership to get this bill to the President’s desk quickly and keep assistance flowing to Ukraine without interruption,” White House Press Secretary Jen Psaki said in a statement.

The White House said that additional resources included in this bill will allow Washington to send more weapons, such as artillery, armored vehicles, and ammunition, to Ukraine. “And they will help us replenish our stockpile and support U.S. troops on NATO territory,” Psaki added.

Democratic Rep. Rosa DeLauro, who sponsored the Bill, said: “Given the magnitude of the terror campaign being waged against the Ukrainian people and Ukrainian democracy, we are morally obligated to ensure Ukraine has the security and economic aid they need”. “I am proud to have joined my colleagues on both sides of the aisle to pass a bill that does just that,” added Delauro, who is the Chair of the House Committee on Appropriations.