The House select committee digging into the Jan. 6 attack on the Capitol demanded a slew of documents on Wednesday, including communications from key White House figures and Donald Trump allies like Rudy Giuliani.

The bipartisan committee is seeking documents related to the Jan. 6 Electoral College vote certification, which was forced to a halt for hours that day when supporters of then-President Trump ― egged on by his insistence the election had been stolen and a speech that morning ― stormed the Capitol.

The requests went out to multiple agencies: the FBI; the Office of the Director of National Intelligence; the National Archives and Records Administration; and the departments of justice, defense, homeland security and the interior, which includes the U.S. Park Police.

The letter gives agencies until Sept. 9 to hand over the material. The committee can issue subpoenas for the information if agencies refuse to provide it.

Among its requests to the Pentagon, the committee is asking for “all documents and communications concerning possible attempts by President Donald Trump to remain in office after January 20, 2021.” 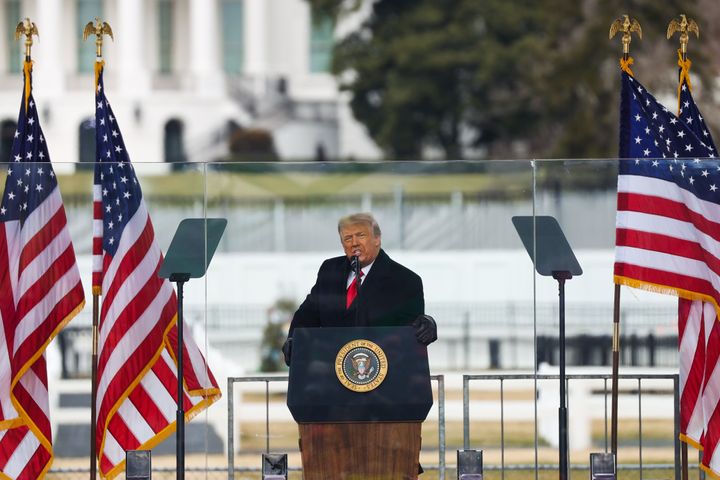 The committee asked the National Archives and Records Administration for Jan. 6 communications related to the rally, demonstrations, attack and vote count, including “efforts to persuade the President to deliver any particular message to people at or near the Capitol.” It also asked for communications that day between key figures, among them Trump, Vice President Mike Pence, chief of staff Mark Meadows, adviser Stephen Miller, former adviser Steve Bannon and members of Trump’s family.

Several Republican lawmakers spoke to Trump on the phone during the siege, and the committee wants any records of conversations with members of Congress.

Members appear interested in finding answers to still-remaining questions about the delay between when rioters breached the Capitol and when officials sent backup to aid besieged U.S. Capitol Police officers. From the Department of Homeland Security, the committee is requesting “all documents and communications” from the day of the riots “regarding the deployment or potential deployment of law enforcement officers or military assets to the U.S. Capitol.”

The committee is also seeking administration contacts with a plethora of right-wing figures outside of government, including conspiracy theorists and members of the Proud Boys, the street-fighting group that played a major role in the riot.

The select committee asked the Justice Department for documents related to the counting of the vote, the potential for demonstrations or violence that day and the aftermath. It also demanded the FBI provide documents and communications about election fraud investigations and crimes between its officials and members of Trump’s legal team: Giuliani, Justin Clark, Matt Morgan, Sidney Powell and Kurt Olsen.

The select committee is bipartisan, with seven Democrats and two Republicans: Reps. Liz Cheney of Wyoming and Adam Kinzinger of Illinois. Republicans pushed to include Trump allies on the committee, but both were rejected.

Democrats formed the committee after Republicans blocked the creation of an independent commission of outside experts. Several Republicans, including House Minority Leader Kevin McCarthy (R-Calif.), initially supported the commission idea, which is something Congress routinely does after disasters or to deal with complex policy problems, but ultimately decided they would rather blame House Speaker Nancy Pelosi (D-Calif.) for the attack.

Select Committee Chairman Bennie Thompson (D-Miss.) said in July that the committee would probe Trump’s role in the Jan. 6 attack.

“Nothing is off-limits,” he said at the time.

He reiterated that stance on Wednesday, saying in a statement: “Our Constitution provides for a peaceful transfer of power, and this investigation seeks to evaluate threats to that process, identify lessons learned and recommend laws, policies, procedures, rules, or regulations necessary to protect our republic in the future.”