Former President George W. Bush on Monday urged the U.S. to begin immediately welcoming refugees from Afghanistan following the collapse of the country’s government and takeover by the Taliban, saying “the Afghans now at the greatest risk are the same ones who have been on the forefront of progress inside their nation.”

“The United States government has the legal authority to cut the red tape for refugees during urgent humanitarian crises,” he said in a statement. “And we have the responsibility and the resources to secure safe passage for them now, without bureaucratic delay.”

Bush — who in 2001 launched a “war on terror” in Afghanistan and then an invasion of Iraq using false and misleading narratives — added that he and his wife, former first lady Laura Bush, remain optimistic and confident about America’s ability to safely evacuate Afghan citizens, even as they watch the events unfolding “with deep sadness.”

“Like our country, Afghanistan is also made up of resilient, vibrant people. Nearly 65 percent of the population is under twenty-five years old,” the former president said. “The choices they will make for opportunity, education, and liberty will also determine Afghanistan’s future.”

Bush launched the 20-year war in Afghanistan, American’s longest, as a means to remove the terror organization al Qaeda, which had taken sanctuary in Afghanistan under the militant Taliban regime, following the 9/11 terror attacks. Shortly after invading the country, Bush also sent troops to Iraq to remove its president, Saddam Hussein ― one of Bush’s earliest goals upon taking office ― under the false premise that he was harboring weapons of mass destruction.

Karl Rove, who served as senior adviser and deputy chief of staff to Bush during his presidency, said Monday that his former boss and the former first lady are “deeply upset” about the Taliban’s immediate takeover and Afghanistan’s expected return to an oppressive Islamic rule of law.

“For 20 years, Laura Bush has hosted groups of Afghan women who came into the United States after beginning to taste freedom in their own country in order to learn about the opportunities that were available to women all around the world. And the idea that the Taliban is going to somehow allow that to continue is absolutely ridiculous,” Rove said in an interview with Fox News. 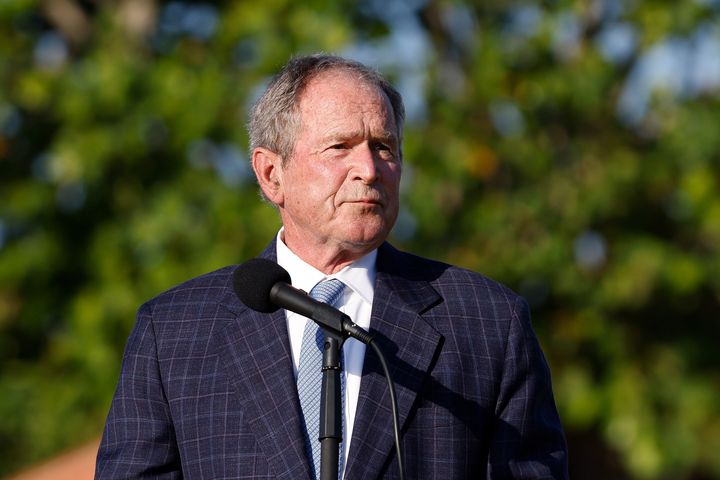 Evacuating Afghanistan has not been easy, however.

Staff and top officials were swiftly pulled from the U.S. Embassy in Kabul on Sunday, and flights were suspended at the Hamid Karzai International Airport on Monday due to swarms of people blocking the tarmac in a desperate attempt to escape. The airport is one of a few places in the country that remained controlled by U.S. troops, allowing for an escape route.

Seven people were reportedly killed in the airport chaos, including individuals who fell from a departing U.S. military transport jet. Similar evacuation attempts were being made on the ground at the country’s border, which is now controlled by the Taliban.