Jeremy Corbyn has challenged Donald Trump on claims the NHS would be up for grabs in trade talks, as the US president arrives in Britain for the NATO summit.

The Labour leader called on him in a letter to clarify that the health service is “genuinely off the table” in preliminary negotiations already under way with Washington.

“I am writing to you today to seek assurances in relation to a post-Brexit UK-US trade agreement, and in particular over the prices paid to US drugs companies as a consequence of any such UK trade deal with the US,” Mr Corbyn wrote. 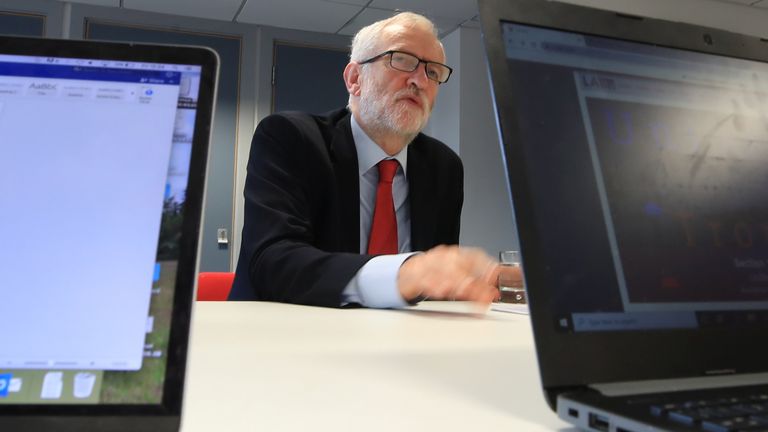 “As you will know, the potential impact of any future UK-US trade agreement on our National Health Service and other vital public services is of profound concern to the British public.

“Any increase in the NHS drugs bill would be an unacceptable outcome of US-UK trade negotiations. Yet you have given a number of clear and worrying indications that this is exactly what you hope to achieve.”

During the election campaign, Mr Corbyn has repeatedly accused Boris Johnson of plotting to sell off the NHS. At Labour Party rallies activists have chanted “Not for sale! Not for sale!”

He even produced a series of previously redacted documents of meetings with between UK and US trade officials that he claimed proved the NHS was on the table.

The prime minister has dismissed the claims as “total nonsense” and insisted last week: “We are absolutely resolved that there will be no sale of the NHS, no privatisation; the NHS is not on the table in any way.

“This is continuously brought up by the Labour Party as a diversionary tactic from the difficulties they are encountering, particularly the problem about leadership on antisemitism, and the great vacuity of their policy on Brexit.”

But Mr Corbyn’s letter to the president appears designed to provoke Mr Trump into a clash with him over the NHS. Senior Tories are said to be nervous about the US president’s visit, which comes just over a week before the general election on December 12.

Mr Corbyn referenced Mr Trump’s insistence the NHS would have to be included in a trade deal during his state visit to Britain earlier this year.

“I think everything with a trade deal is on the table,” the US president insisted at a news conference in June.

“When you’re dealing in trade, everything is on the table – so NHS or anything else, a lot more than that, but everything will be on the table, absolutely.”

Mr Trump later backtracked and said “I don’t see it being on the table”.

Picking up on the confusion, Mr Corbyn wrote in a letter sent on Monday: “I am writing to you today to ask you to request US negotiating objectives are revised as a matter of urgency.”

He urged them to remove any reference to medicines or demands for “total market access” to UK public services and ensure the National Institute for Health and Care Excellence stays in charge of setting the threshold for the cost-effectiveness of drugs.

Other demands include blocking the UK government from being sued and patient data being shared.

Mr Corbyn concluded that “a revision of the US negotiating objectives along these lines would go a long way to reassuring the British public” that the NHS is not on the table in talks and will not face “irreversible privatisation”.

U.S. Construction Spending Jumps Much More Than Expected In August

Aurus Disrupts the Gold Industry – Today Its Ecosystem Lists at a Value of $75m
We and our partners use cookies on this site to improve our service, perform analytics, personalize advertising, measure advertising performance, and remember website preferences.Ok