For Trump, a Time of Indecision

WASHINGTON — Speaking to a Fox News reporter near the Mexican border on Wednesday, President Trump seemed taken aback when asked if the White House were preparing to roll out gun control proposals the next day, a timeline administration officials had suggested was likely.

“No, we’re not moving on anything,” Mr. Trump said. “We’re going very slowly in one way because we want to make sure it’s right.”

The result is that almost two months after the back-to-back mass shootings in El Paso and in Dayton, Ohio, when Mr. Trump said he wanted to pass “very meaningful background checks,” warnings from gun rights advocates and Republican lawmakers about the political blowback that would result from doing that have led to indecision about what to do and what the time frame is for sharing it.

But idling in neutral is not something the president is doing only on guns. In discussions with his staff, Mr. Trump has made clear he wants to accomplish something big, but seems stymied as to what it might be, according to interviews with a half-dozen aides and advisers. In the meantime, he has remained on the sidelines as divisive issues are debated and is treading water even on possible staff changes he wants to make, for fear of how things “play.”

On the international stage, Mr. Trump has seemed most conflicted about how to respond to Iran’s attack on oil facilities in Saudi Arabia, threatening to order “the ultimate option” one moment, and then warning that getting involved in Middle East wars was a mistake the next.

And the lack of direction is apparent even in the message he delivers at his campaign rallies. With little in the way of policy proposals or a larger vision, he has been telling crowds from New Hampshire to South Carolina, “You have no choice but to vote for me,” and has been promoting his new slogan, “Keep America Great.”

On guns, Senator Mitch McConnell, Republican of Kentucky and the majority leader, has made it clear he will not take any action until the White House does. “If the president is in favor of a number of things that he has discussed openly and publicly, and I know that if we pass it, it will become law, I’ll put it on the floor,” he said this month.

For Mr. Trump, who has been under pressure to act but appears to be aware that any decision he makes comes loaded with its own political risk, part of the holdup is division within his own administration.

When William P. Barr, the attorney general, and Eric Ueland, the White House legislative director, met with Republican lawmakers on Wednesday, distributing a plan to expand background checks, he did so with the blessing of the White House, according to people briefed on what took place. But White House communications officials immediately distanced the president from what they described as a “test run” on a proposal they expected would meet resistance and ultimately convinced Mr. Barr, who some Trump aides view as overly aggressive that the plan was a nonstarter.

“The president has not signed off on anything yet,” said Hogan Gidley, a White House spokesman. Of the plan that was being distributed by a White House staff member and a senior administration official, he said, “This is not a White House document, and any suggestion to the contrary is completely false.” 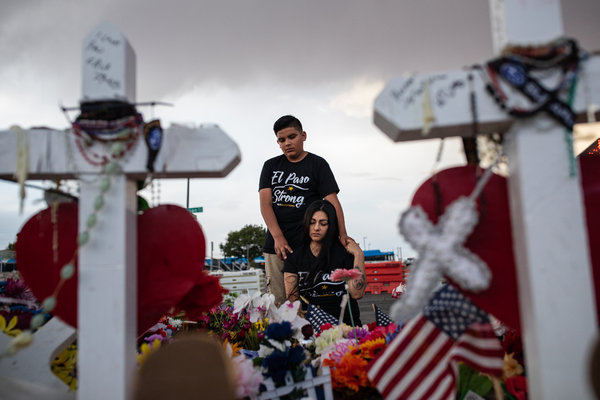 Mr. Trump also appears to be tempering his aggressive vows to impose a ban on all flavored vaping products. In an announcement last week in the Oval Office, with the first lady, Melania Trump, by his side, Mr. Trump declared that “we can’t allow people to get sick, and we can’t have our youth be so affected.”

But days afterward, Mr. Trump sent out a tweet that raised questions about his commitment to a ban that his administration is forging ahead with. “Let’s get counterfeits off the market, and keep young children from Vaping!” Mr. Trump wrote, making the implicit argument that vaping was a good alternative to cigarettes and shifting the focus counterfeit products.

The tweet, Mr. Trump has told aides, came after a discussion with his campaign manager, Brad Parscale, who warned him that the ban was going to be received poorly by his conservative supporters. On Thursday, the White House scheduled and then abruptly postponed a meeting with conservatives concerned about the vaping ban. One person briefed on the process said the agencies that would impose such a ban were still reviewing how to go about it.

Still, to the president’s critics, Mr. Trump’s apparent paralysis on policy issues like guns is indicative of a larger problem in his administration.

“It requires stepping out of entertainment frame and into a political leadership frame,” said Peter Ambler, the executive director of Giffords, an organization tackling gun violence. “He’s not strong enough to forge any sort of compromise that would get anything less than full support from his base. He does not have that degree of political power or savvy, and that’s why he ends up in a perpetual ‘Infrastructure Week.’”

Mr. Trump’s defenders said he was no different from his predecessors, who also found themselves stalled at times in their presidencies. But some political analysts said Mr. Trump’s situation was different.

“There are a lot of balls in the air here, and it’s not quite clear how he’s going to catch them, or where they’re going to land,” said David Axelrod, a former top adviser to President Barack Obama. “On some things, he has strong opinions, but on many things, he doesn’t. If you don’t have some core organizing principles, other than your own political well-being, it’s easy to get lost.”

Despite wanting to give the impression that he is decisive, said one person close to Mr. Trump, part of his holdup is that the president constantly changes his mind and equivocates. While Mr. Trump often worries about how his decisions will play, he is also anxious about other people making decisions for him. Figuring out where Mr. Trump will end up, the person said, is like trying to figure out what number the roulette ball will land on.

The president has few, if any, trusted advisers to assist him. And Mr. Trump has also been left even more isolated without his longtime assistant, Madeleine Westerhout, whom the acting White House chief of staff, Mick Mulvaney, fired last month after she indiscreetly shared details about his family in an off-the-record dinner with a small group of reporters in Bedminster, N.J., according to multiple White House officials.

Ms. Westerhout had been one of the president’s few organizing influences, the officials said. In the weeks since she left, Mr. Trump has gone back and forth on his feelings about Mr. Mulvaney, praising him one day and denouncing him the next, people familiar with the discussions said.

For longtime Republican analysts, Mr. Trump has a single track he should be traveling on, and any distractions that cause him to take his eyes off could be disastrous politically.

“Right now his big challenge is regaining the initiative on the economic narrative,” said David Winston, a Republican pollster who works with the House Republican Conference. “That is still what is concerning the country. That is the core dynamic he’s going to have to deal with leading into this next election.”