Feisty Sanders clashes with Biden, Warren – and the moderators – at last-chance Iowa debate

Warren, Sanders at odds as candidates prepare to take the debate stage in Iowa

The final Democratic presidential debate before the pivotal Feb. 3 Iowa caucuses erupted Tuesday night, as Bernie Sanders and Elizabeth Warren sparred over the disputed reports that Sanders had privately told Warren in December 2018 that a woman could not realistically become president.

“Well as a matter of fact I didn’t say it," Sanders insisted, when one of the debate's moderators asserted the conversation had occurred.

"That is correct," he flatly said later, when asked whether he was still unequivocally denying that the conversation took place. Bizarrely, one of the CNN debate's moderators then immediately and matter-of-factly asked Warren, "What did you think when Sen. Sanders told you a woman could not win the election?"

That prompted laughter in the debate hall, and a bewildered chuckle from Sanders. Some commentators have suggested the disputed reports of Warren and Sanders' alleged 2018 conversation, which cited sources who were not present for Sanders' alleged remarks, were a leak from the Warren campaign intended to blunt Sanders' surge in recent polls.

Sanders reiterated that he would do "everything in my power" to help a woman candidate win the presidency, if she secured the Democratic nomination. Warren, in turn, outwardly sought to deescalate the situation, but went on to argue that the issue raised larger questions and again claimed Sanders had made the remark.

"Bernie is my friend and I’m not here to try to fight with Bernie," Warren began, before saying it was important to take the issue of sexism "head-on."

"Can a woman beat Donald Trump? Look at the men on this stage," Warren said to applause. "Collectively, they have lost ten elections. The only people on stage who have won every single election they've been in are the women. Amy and me. And the only person on this stage who has beaten an incumbent Republican anytime in the past 30 years is me. And here's what I know — the real danger that we face as Democrats is picking a candidate who can't pick our party together."

Sanders quickly challenged Warren's assertion, noting that he won an election against a GOP incumbent in November 1990, when he unseated Lieutenant Governor Peter P. Smith.

"And I said I was the only one who has beat an incumbent Republican in 30 years," Warren shot back — even though Sanders' win was, in fact,  within the past 30 years.

The brouhaha smashed the more than yearlong non-aggression pact between the two candidates, and was just one of several flashpoints that emerged during the debate.

Early on, Sanders directly challenged former Vice President Joe Biden's initial support for the Iraq war, which he called "the worst foreign policy blunder in the modern history of this country."

"Joe and I listened to what Dick Cheney and George Bush and [Donald] Rumsfeld had to say," Sanders said. "I thought they were lying. I didn't believe them for a moment. I took to the floor. I did everything I could to prevent that war. Joe saw it differently."

Biden acknowledged that his 2002 vote to authorize the war was a "mistake" but emphasized that former President Barack Obama still felt that he had the foreign policy credentials to serve as vice president.

“I think my record overall, on every other thing we’ve done, I’m prepared to compare it to anybody on the stage," Biden said. He later said he would not meet with North Korea's leaders without preconditions, accusing the Trump administration of being used by the dictatorship there as it seeks "legitimacy."

After the exchange, Sanders' team tweeted out a video from summer 2003 showing Biden's previous support for the Iraq War. ("Some in my own party have said that it was a mistake to go in to Iraq in the first place and believe that it’s not worth the cost,” Biden said in the video. “But the cost of not acting against Saddam I think would have been much greater.”)

Former South Bend, Ind., Mayor Pete Buttigieg, who served in the war in Afghanistan, added: “The next president is going to be confronted with national security challenges different in scope and kind than any we have seen before. … For me, those lessons of the past are personal."

Buttigieg and Minnesota Sen. Amy Klobuchar later said they would ensure that Iran never obtains a nuclear weapon, but emphasized that joint action among allies would be necessary.

The party's top six contenders were squaring off amid a pending Senate impeachment trial and white-hot tensions between Elizabeth Warren and Sanders.

Early on, Warren and Sanders disagreed over the USMCA trade pact, which Sanders said he opposed in part because of "climate change" concerns — even though the AFL-CIO and other powerful progressive interest groups have supported the deal.

"I will not vote for a trade agreement that does not incorporate very very strong principles to significantly lower [carbon emissions," Sanders said. He went on to forcefully tell Biden that he was "sick and tired" of the corporate influence over such trade deals. ("We need to have corporate responsibility," Biden responded, which he argued was achieveable through appropriate "enforcement mechanisms.")

“We can do much better than a Trump-led trade deal," Sanders asserted.

For her part, Warren said during the debate that the deal was a "modest" improvement, but still a worthwhile one, especially for Iowa farmers who have been hit by the ongoing trade war with China: “We get up the next day and fight for a better trade deal," she said. 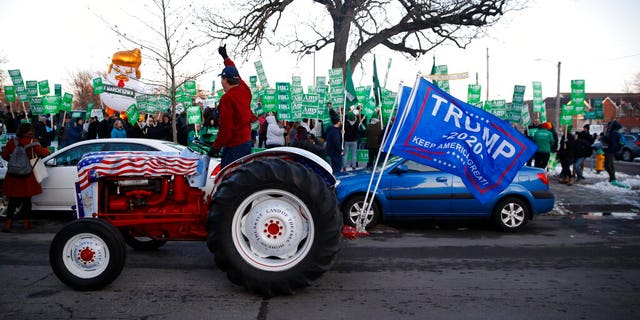 The feuding was likely to expand to include nearly every candidate on stage — although several previous crowd favorites won't be returning. The CNN debate at Drake University in Des Moines, Iowa debate marks the first forum with an all-white lineup. Businessman Andrew Yang, an Asian American candidate who appeared in the December debate, failed to hit the polling threshold for Tuesday's event. 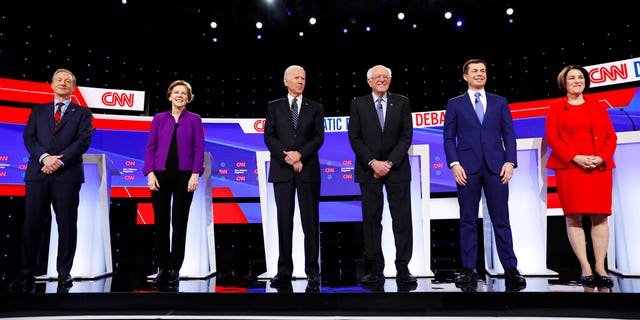 Sanders, meanwhile, has recently stepped up his attacks on Biden over his past support of the Iraq war, broad free-trade agreements and entitlement reform, among other issues. Klobuchar, who has had several strong debates, will be looking for another opportunity as she remains mired in the middle of the pack in polling.

Billionaire Tom Steyer will have to answer criticism that he's trying to buy his way to the White House. And with two surveys showing Buttigieg losing support in Iowa, the former mayor of South Bend will need a breakout moment to regain strength before the caucuses. 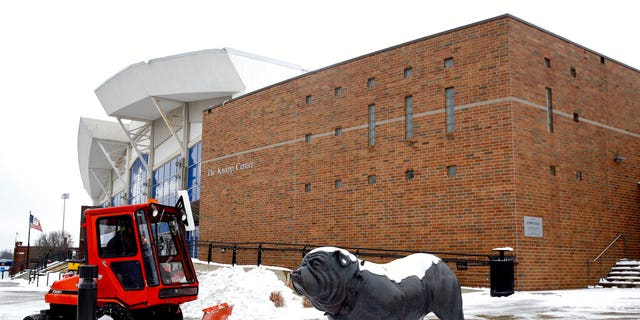 “This is one of the last times Pete will be on national television before caucusgoers need to make up their minds,” an email from Buttigieg’s campaign stressed to supporters.

The showdown takes place as the latest polls indicate a very close contest among former Biden, Sanders, Warren and Buttigieg both in Iowa and New Hampshire, which holds the first presidential primary in the White House race just eight days after Iowa’s caucuses. Surveys in both states show plenty of voters remain undecided or willing to change their minds on whom they’re supporting.

“All the polling data that I’ve read and seen is … it’s a toss-up,” Biden told campaign volunteers at a Des Moines field office on the eve of the debate.

Fox News' Paul Steinhauser in Des Monies, Iowa, and The Associated Press contributed to this report.