Conservative scholars slammed Facebook for partnering with The Pulitzer Center to promote content from The 1619 Project, a controversial New York Times initiative that aims to reframe American history in terms of slavery and racism.

The backlash comes amid testimony from a former Facebook employee who claimed the company is "tearing our societies apart" and after the longest outage in Facebook's history.

The Pulitzer Center acknowledged that The 1619 Project has triggered "outrage," but it insisted that the project presents a "brave message of healing and uplift — that in recognizing the unique role of Black Americans in shaping our society we can both better understand who we are as a nation and also move forward together with more honesty, justice, and unity."

According to photos sent to FOX Business, Facebook appears to have promoted 1619 Project content via the Lift Black Voices hub — to users who did not "like" the page. 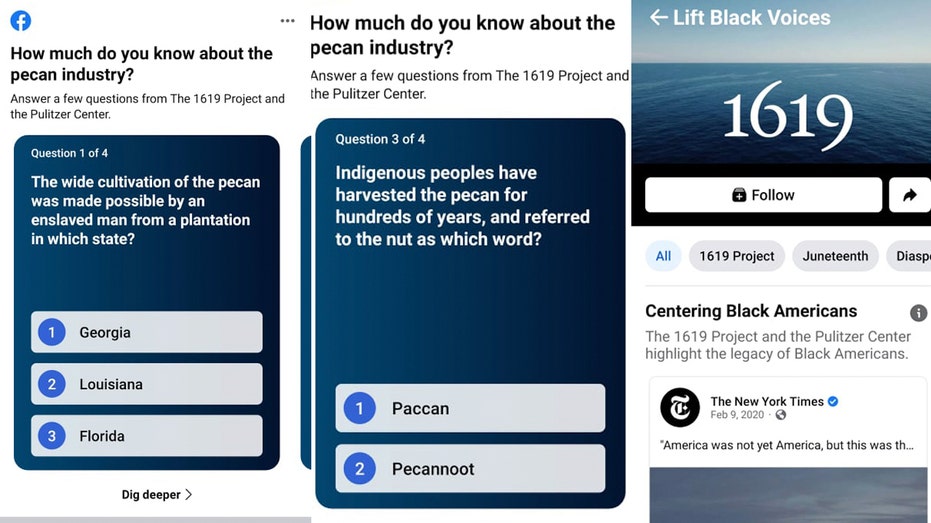 Scholars condemned Facebook's apparent promotion of the project in statements to FOX Business.

"It’s utterly irresponsible for Facebook to be treating The 1619 Project as an authoritative source on the subject of American slavery," Wilfred McClay, Ph.D. professor of history at Hillsdale College, told FOX Business. "It has been shown beyond question to have been an undertaking riddled with egregious errors of fact and careless, amateurish judgments."

McClay noted that "a group of America's most distinguished historians" demanded corrections to the project, but The New York Times declined, "although it later altered the digital record of the Project surreptitiously, in violation of every fundamental standard of journalistic ethics." The project had claimed that "one of the primary reasons" patriots fought the American Revolution was to defend slavery, when historians argued the revolution disrupted slavery.

The 1619 Project also originally claimed that it "aims to reframe the country’s history, understanding 1619 as our true founding." Yet this claim mysteriously disappeared from the website in September 2020. The following month, 21 prominent scholars called on the Pulitzer Center board to revoke the Pulitzer Prize it had awarded to Nikole Hannah-Jones, the project's founder.

McClay called The 1619 Project "one of the most shameful episodes in the history of American journalism."

Peter Wood, president of the National Association of Scholars and author of "1620: A Critical Response to the 1619 Project," also condemned Facebook's move.

He called The 1619 Project "an effort to destabilize and demoralize our society. The 1619 Project is about the false idea that America was founded on racial oppression and that white supremacy has always been and remains its essential operating principle. Why Facebook thinks that is a constructive idea or a good critique of American society is hard to understand.

"Nikole Hannah-Jones proudly called the post-George Floyd riots in American cities the ‘1619 Riots,’ and ‘1619’ was gleefully spray-painted on many of the statues the rioters toppled," Wood noted. Pointing to Facebook's decision to run ads promoting The 1619 Project in February 2020, he said that "Facebook owns a share of that vandalism and falsification of history."

"If Facebook is interested in encouraging civic knowledge, they should look elsewhere," Matthew Spalding, former executive director of former President Trump's 1776 Commission, told FOX Business. "The 1619 Project is not about history. At best, it is history backwards: using pieces of the past to create a partisan narrative for today’s politics. This is not history but ideology, intended to divide the nation into racial factions."

Mary Grabar, resident fellow at The Alexander Hamilton Institute and author of "Debunking the 1619 Project: Exposing the Plan to Divide America," told FOX Business that "it would be dangerous to students and the future of our country for Facebook to promote a grossly falsified history such as The 1619 Project."