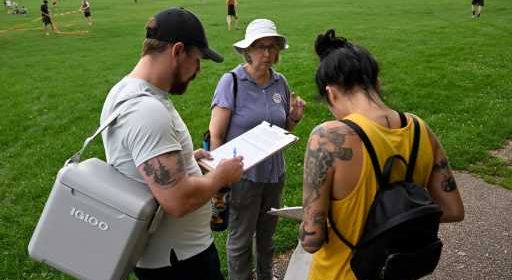 Light sprinkles were falling on Washington Park on Wednesday afternoon, where Mary Cheever was on the prowl.

“Would you like to increase funding for teachers and schools?” she asked a pair of strangers, clipboard in hand.

“Would you sign a petition so we can vote on paying teachers more?” she asks another group of strangers. And so on, to another group of parkgoers, including a family stopped in a pedal-powered carriage.

Some weren’t Colorado voters; some said they already signed or weren’t interested; others stopped in their tracks to add their names to the petition.

Cheever, a volunteer with Great Education Colorado, described the interactions as energizing, if never-ending. Her group is seeking to put a measure on the November ballot to dedicate more money to education. But getting there means gathering 125,000 signatures — that’s enough voters to fill Coors Field two-and-a-half times over — by Monday.

“It’s been really easy to get signatures,” Cheever said between flagging down possible signees. “Really easy. But it’s not easy to get 125,000 of them.”

The struggle illustrates the gap in who can afford paid petition circulators and who relies on volunteers, she and other backers of the funding measure said. Colorado gives voters a direct say in what becomes law through its initiative process. But backers need to gather signatures equal to 5% of the votes cast in the most recent Secretary of State’s election to qualify.

It’s a time-consuming process and potentially very expensive if a group chooses — and can afford — to hire petition gatherers. As of Thursday, the Secretary of State’s office lists two measures that backers have successfully petitioned onto the ballot. A third group submitted signatures for their measure Thursday, though they haven’t been verified yet. Each reported spending hundreds of thousands of dollars, or more, on political consultants and signature gathering.

In addition to the Great Education Colorado petition, nine others were approved by the Colorado Secretary of State’s office for circulation. All face a Monday afternoon deadline to submit signatures to qualify for the November ballot.

Adam Dunstone, a partner at the progressive political consulting firm Alpine Public Affairs, said he’s seen petition gathering costs top $2 million. Backers need to overshoot the minimum signatures to account for those that are void. They need to account for the conversations that don’t bear ink. And they need to tally the sheer amount of time it takes to have those thousands and thousands of conversations with Coloradans.

Even at 30 seconds per signature — by far an undercount of how long each takes — hitting that 125,000 mark necessary for the November ballot would take more than 43 days of uninterrupted petitioning.

“It’s all one giant math equation, essentially,” Dunstone said of the cost. “(For statewide initiatives) we’re going to put up four offices, we need to average putting out 100 circulators a day, and each circulator needs to be doing an average of X, and then there’s just doing the hard management side of that work.”

It should be a challenge to do something as weighty as change state law, he said. And while he’s seen volunteer-led efforts, like Great Education Colorado’s, land on the ballot, it takes “a tremendous amount of energy.”

“It’s incredibly hard, and I don’t think folks — campaigns and candidates and others, as it relates to ballot access — realize how hard it is until they try it themselves,” Dunstone said.

Great Education Colorado’s initiative would dedicate a portion of state revenue to education, without raising taxes to do so. The group was able to include its question on a poll last month that showed strong support for the concept. But it hasn’t been able to open any particularly deep wallets to help put the poll to the ballot test — creating a particular frustration for the backers.

So far, the group has raised about $100,000 total. About a third of that has gone toward paid petition gatherers, according to finance reports.

Lisa Weil, executive director of Great Education Colorado, said they’ve primarily been relying on volunteers, like Cheever. Many work in education, and many have kids, making it hard to carve out petition time earlier in the year and now with other summer priorities. They report good outings, but “it’s an uphill climb” to reach the minimum signatures, she said.

“(Colorado law) gives people a sense that they’re in the driver’s seat — but only if (the question) is put in front of them,” Great Education Colorado Executive Director Lisa Weil said.

As for Cheever, she’s pessimistic that they’ll be able to reach their signature goal, but didn’t stop from asking everyone she could. She even keeps a bundle of petitions in her bag for when she walks her dog outside of dedicated petitioning time. In all, she estimates she’s turned in 1,500 signatures of people who, if they don’t support the initiative outright, at least support it being on the ballot.

“This one particularly is beyond frustrating, because it really feels insurmountable,” Cheever said. People literally stop in their tracks to sign when she says they want to pay teachers more, but the signature requirements feel like they need greater infrastructure than night-and-weekend volunteers, no matter how fired up they and voters are, she said.

“The people hurt the most are the kids. They can’t just go back and redo grades when there’s money,” she said. “We cannot stop trying. We cannot give up on this, because it’s just not an option. It’s not going to get better until we all prioritize it.”