Do as we say or else! EU threatens to slap UK with trade sanctions unless Boris gives in

The European Council President said officials are reviewing the “tools at our disposal” if the Prime Minister refuses to implement swathes of Brussels red tape in the region. His remarks come ahead of a crunch meeting of top UK and EU officials in London today. Speaking at the European Parliament in Strasbourg, Mr Michel said: “We believe deeply in the rule of law. Pacta sunt servanda – when agreements are reached, they must be implemented in good faith.

“And this is the expression of serenity and serene strength within the EU.

“We wish to be a loyal partner, we want a fruitful and cooperative partnership with the UK. That’s always been the spirit of the negotiations around the table, where we were able to showcase our unity.

“But we’re also ready to make use of the different tools at our disposal to protect our interests, the integrity of the single market and ensure our agreements are respected and upheld, and also to protect the Good Friday Agreement.” 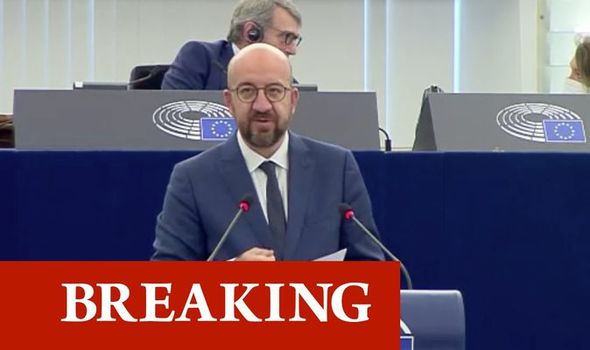 Mr Michel, alongside Commission boss Ursula von der Leyen, is due to meet Mr Johnson in the UK later this week.

European officials have confirmed they will use the margins of the G7 summit in Cornwall to pressure the PM into respecting the post-Brexit border fix for Northern Ireland.

And the insiders hope the EU chiefs will be able to recruit Joe Biden to ramp up the pressure on Downing Street to implement EU red tape in the region.

Brussels is understood to be considering hitting British goods with trade tariffs if No 10 describes to scrap more EU rules.

The bloc is planning to impose a sausage blockade on Northern Ireland that could eventually trigger the trade war.

Mr Johnson has warned that urgent action is needed to protect peace in Northern Ireland amid an ongoing Brexit row with Brussels.

The Prime Minister told Mrs von der Leyen that rapid progress is needed to cool tensions in the region.

There is growing hostility to the Brexit deal’s Northern Ireland Protocol to avoid a hard border because of the EU’s bureaucratic approach.

In a phone call last night, Mrs von der Leyen hit back and accused Downing Street of not implementing the Brexit divorce and trade deals.

She expressed her “deep concern” that No 10 was apparently rowing back on its previous promises.

The top eurocrat tweeted: “I expressed my deep concern on EU-UK TCA and WA implementation.

“We will discuss how to progress and ensure compliance in the margins of G7.”

A Downing Street spokesman said: “The Prime Minister and the President also spoke about the issues with the Northern Ireland Protocol.

“The Prime Minister set out that the UK is committed to finding practical solutions that protect the aims of the Belfast (Good Friday) Agreement and minimise the impact on the lives of people in Northern Ireland. He underlined the need for quick progress.”