Cuomo asks to buy COVID-19 vaccines directly from Pfizer, in what could be a first

After taking heat for his state's coronavirus vaccine rollout, New York Gov. Andrew Cuomo said Monday that he asked Pfizer about the state buying doses of the vaccine directly.

Cuomo said New York would be the first to buy directly vaccine doses from a drugmaker; states have so far been receiving supply from the federal government.

"The problem was created by the federal negligence in the first place," the Democratic governor said at a press conference on Monday. "The federal government is in control of the supply. They must increase the supply. Approve Johnson & Johnson, expedite that. Buy more Pfizer. Buy more Moderna."

HHS SECRETARY AZAR RIPS CNN AFTER REPORT OF RESIGNATION: ‘I AM STILL HERE’

"As a state, we're trying to do everything we can," he continued. "Pfizer is technically not bound by any federal agreement because they did not get engaged in what the federal government called Operation Warp Speed. … Pfizer is a New York company, they're headquartered here, and I sent a letter asking if New York could buy directly from Pfizer."

In the letter to Pfizer CEO Albert Bourla, Cuomo said New York will receive 250,000 doses of coronavirus vaccine this week, which is 50,000 fewer than the week before.

"Shifting guidance from the Centers for Disease Control and Prevention drove the number of New Yorkers eligible and prioritized for the vaccine from 5 million to 7 million practically overnight," Cuomo wrote. "The federal administration essentially opened up a floodgate while cutting our supply – leading to confusion, frustration, and dashed hopes."

According to New York's original guidelines, the first tier of the vaccines were to be distributed to high-risk hospital workers, EMS workers, urgent care providers, residents and staff at nursing homes – among a few other select groups.

In an effort to speed up COVID-19 vaccination efforts, the Trump administration asked states to widen distribution to include people ages 65 and older, and others who are at high risk for severe illness by releasing second doses that were previously being reserved for those who already had the first shot.

Health and Human Services Secretary Alex Azar defended his department’s work during an interview with "America's Newsroom" on Fox News Monday. Over 31 million COVID-19 vaccine doses have been distributed to states, and 14 million have been administered as of Friday, Azar said. More than 900,000 vaccinations are administered per day, he added. 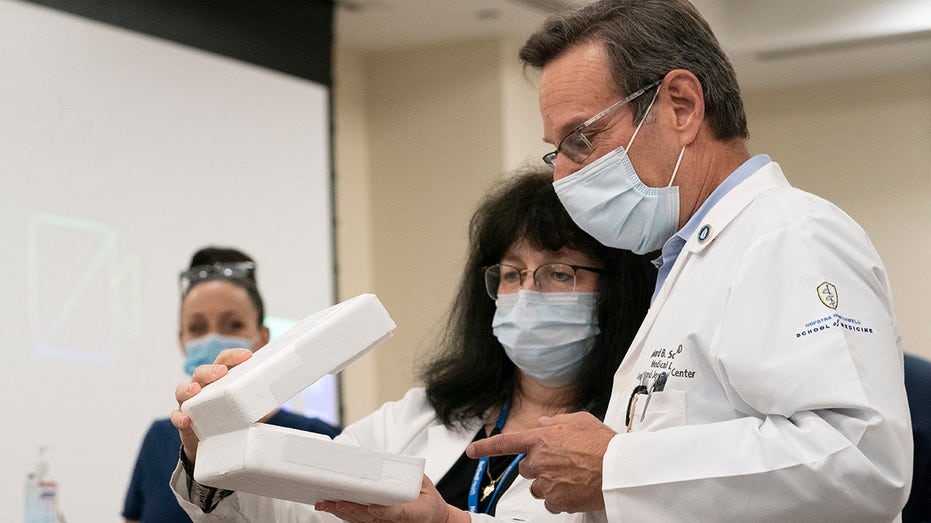 Azar said most governors have rolled out these doses effectively in their states, but that some have struggled.

"You've got some governors who are, frankly, the ones who are failing," Azar said, citing Minnesota, Wisconsin and Michigan as states that have administered 50% or less of vaccine doses received. "They're failing and they're just looking for somebody else to blame here."

If all 50 states begin attempting to buy directly, it could set off a bidding war similar to what was seen at the beginning of the pandemic where states were battling each other for medical supplies.

FOX Business' inquiry to Pfizer was not immediately returned.