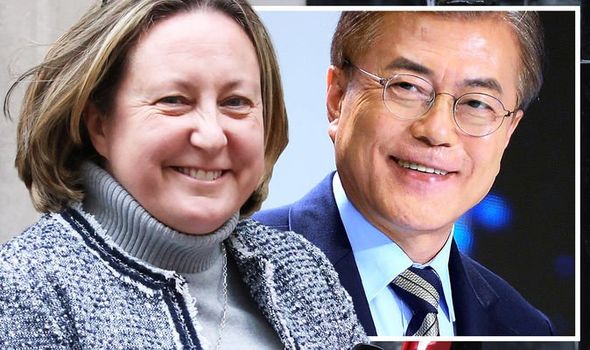 International Trade Secretary Anne-Marie Trevelyan said there is a “huge demand” for British goods and services in the South East Asian powerhouse with exports surging by nine percent in the last year. Government-backed trade shows in South Korea have also helped UK businesses land deals worth more than £70 million in 2021, she said. British-made products ranging from hydrogen fuel cells and wind turbines to lifejackets and PPE will be supplied to the South Korean market through deals made at DIT-supported events in the country.

Ms Trevelyan, said: “As part of our Global Britain agenda – we are helping businesses capitalise on the huge demand for British goods and services in South Korea. As the UK eyes future growth opportunities in the Indo-Pacific, we plan to strengthen trade ties with the region’s biggest economies like South Korea.

“We have already negotiated the world’s most ambitious digital trade deal with Singapore this year, and we’re on track to join the CPTPP next year, a huge free trade area with a combined GDP of £8.4 trillion.” South Korea is the tenth largest economy in the world and it is a key part of the UK’s strategic tilt to the Indo-Pacific region.

Trade between the two nations increased by six percent to total £13 billion in the year to June 2021, and the UK exported £2 billion more to South Korea than it imported. DIT’s Pavilion showcase series – which provides stalls for UK companies to exhibit at overseas tradeshows – has enabled British firms to promote their products at South Korea’s largest events.

Green energy supplier Ceres Power has partnered with Korea’s Doosan on a major long-term deal to build a 50Megawatt factory to produce its cells – worth at least £43 million over three years.

Intelligent Energy, the UK fuel cell manufacturer, has also benefited while the Birkenhead-based safety and survival solutions firm Survitec, which designs and manufactures a wide range of goods from lifejackets to medical equipment and PPE, has signed a contract worth £17 million over the next five years to supply its products to Korea.

This year the government plans to review the Continuity Free Trade Agreement with South Korea which came into force one year ago on 1st January 2021. The deal has already helped businesses across a wide range of sectors, including tech and clean growth, enter the South Korean market.

Minister for Exports, Mike Freer, said: “UK exports to South Korea have boomed this year, with British businesses wrapping up deals worth tens of millions. We expect this trend to continue as we implement our new 12-point export strategy and build out our ambitious UK Tradeshow Programme.

“Not only will this plan give businesses the tools needed to take their top quality products worldwide, but it also focuses support on SMEs and businesses outside London to help level up opportunities throughout the UK.”

The export boost comes hot on the heels of Britain signing off its first full trade deal as an independent nation in December after reaching an agreement with Australia to wipe out trade tariffs.

It is hoped it will pave the way for the UK to join 11 countries in Trans-Pacific Partnership, which includes New Zealand and Australia as well as Canada, Japan and Singapore. The bloc includes some of the world’s biggest economies as well as those on the rise in an area with a population of half a billion.