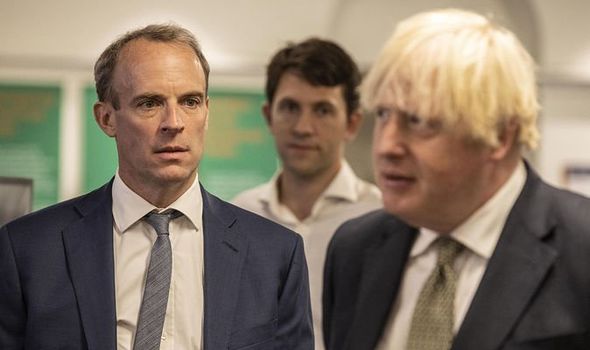 Sources have told the Sunday Express that Mr Gove, who is currently Chancellor of the Duchy of Lancaster, is eyeing a big job in Government and “wants a foreign facing portfolio”. Meanwhile, Mr Raab has been criticised for his handling of the Afghanistan crisis in particular staying away on his luxury beach holiday in Crete and failing to make a call to Afghan ministers about the welfare of translators working for Britain.

The row has seen calls for him to be sacked but it is claimed that instead Mr Johnson has decided to move him in his big reshuffle which he hopes will set the Government ready for the next general election.

A source told the Sunday Express: “The PM would like to get Gove out of the Cabinet Office because he is being blamed for briefing against colleagues and is seen as too powerful. Foreign Secretary is a big job but one which is harder to use as a platform for leadership ambitions.”

The source added: “Raab has not had a good crisis but the PM wants to keep him in the cabinet and as First Secretary he performed well when the PM was in hospital last year.

“He may combine the Cabinet Office ‘fixer’ role with effectively being Deputy Prime Minister.”

The reshuffle is expected in the New Year although some are urging Mr Johnson to do it before the party conference in the Autumn.