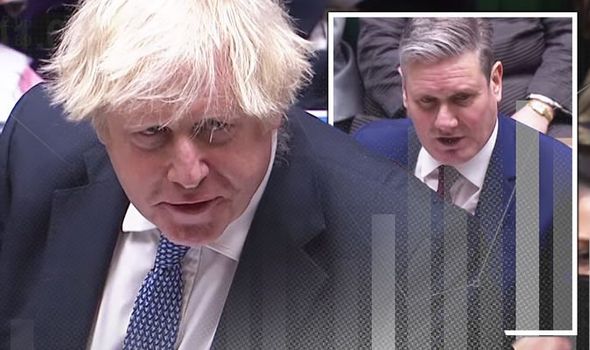 The latest polls put Labour’s popularity at its highest since the general election in 2019. It comes as the Labour leader is expected to take the Prime Minister to task in today’s Prime Minister’s Questions about whether Downing Street had a lockdown-breaking bash last December.

Mr Johnson has denied claims that the Government broke its own restrictions.

Sir Keir previously told Boris to “have the guts” to “be honest” about what happened.

A Deltapoll conducted from December 2-4 gave Labour a one-point lead over the Conservatives at 30 percent.

The Tories dropped 3 percentage points compared with the start of November.

A Survation poll released yesterday (Tuesday) suggested this chasm could be even wider.

It put Labour ahead of the Conservatives on 39 percent – up two points from the middle of November.

The survey, which was conducted from November 30 to December 1, saw the Tories drop down a point to 36 percent.

This lead could stretch even further as the Government faces growing discontent over allegations that “several dozen” people attended a party on December 18 last year.

The BBC is reporting that there is also “fury” from backbenchers about the claims.

Sir Roger Gale, a long-serving Tory MP, said that “the buck stops at the top”.

He urged Mr Johnson to give definitive answers over what happened at Prime Minister’s Questions today.

Number 10’s denials of the party have been called into question by the emergence of a video of then-spokesperson Allegra Stratton appearing to joke about it.

In footage obtained by ITV, Ms Stratton jokes: “This fictional party was a business meeting and it was not socially distanced.”

In response to the video, Downing Street said: “There was no Christmas party. Covid rules have been followed at all times.”