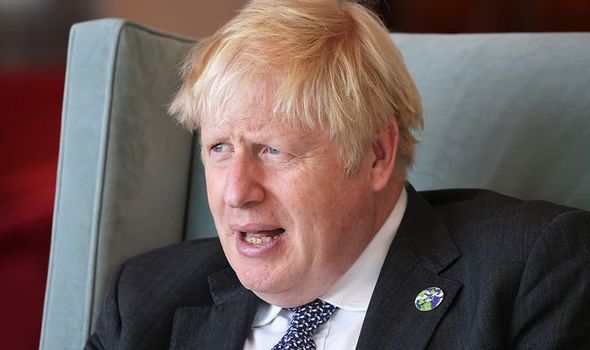 The Prime Minister is desperately trying to win around critics of tougher guidelines warning there is “no room for complacency” over the surge in the Omicron variant.

Mr Johnson is braced for a wave of ministerial aides quitting in fury over Covid passport rules.

More than one in five Tories are expected to oppose or sit out the vote, leaving the Prime Minister potentially reliant on support from Labour.

Mr Johnson has told his backbenchers he has little option but to press ahead with his Plan B.

Omicron now accounts for a fifth of cases in England with the first death announced yesterday and 4,713 confirmed cases.

The Government is racing to give all adults a booster jab within weeks and the Prime Minister said imposing Plan B restrictions was a “proportionate” response to the highly transmissible variant. He urged Tory MPs to back him in today’s Commons showdown while also refusing to rule out introducing further measures.

The Prime Minister said: “I think what everybody needs to recognise is that Omicron is a very serious risk to public health and that it’s spreading very fast.

“And I think there’s no room for complacency. But we have the vaccines, our position remains incomparably better than it was last year.

“I hope that people will also understand, colleagues in Westminster, around the country, will also see that the measures we’re putting in place are balanced and proportionate.

“And it is because of the vaccine rollout, because of what we’ve done, that we actually have an economy and a society that is more open than virtually any other in Europe. What we will also do now is greatly intensify, accelerate that booster rollout and urge everyone to get boosted now.”

Mr Johnson said concern for public health was “what drives me in this” and he pledged to make his case to “friends, to the public, to everybody”.

He said: “What I think is absolutely obvious to everybody who studies the data is that if we can get boosted now, protect ourselves now, then we will have a much, much better chance of having a protected NHS going into next year.

“We won’t have the NHS overwhelmed, people won’t have cancellations of cancer appointments and other vital, vital clinical needs so much next year, because we’ve got boosted now.

“And the other crucial point is we will be protecting our society, protecting our livelihoods and allowing ourselves to keep going forward in the way that we have over the last few months.”

Plan B curbs also include wearing masks indoors in most public places and guidance to work from home.

But the Tory flashpoint is the vote on introducing Covid passports to enter indoor venues with more than 500 people, unseated outdoor events with more than 4,000 and any place with more than 10,000 people. MPs including aides to Communities Secretary Michael Gove and Deputy Prime Minister Dominic Raab are considering quitting rather than vote for the changes.

They say passports which show vaccine status or a negative lateral flow result, are pointless and intrusive. Tory Tom Hunt, one of 80 MPs set to rebel, said: “After much thinking, I’ve come to the conclusion that I can’t support Covid Plan B.“I just don’t think the justification is there and I fear that the mindset-logic that led to it could well lead to a gradual creep towards more and more draconian restrictions.”

He said it had already been tried in France, Germany, Scotland and Wales and “none of it stands up” to keep Covid at bay.

Senior Tory Stephen Crabb said it would be “very, very difficult” for him to vote for Covid passes.

He said it would lead to a two-tier society allowing the jabbed “to participate fully in all of the benefits of mainstream society” and the unvaccinated, “who by force of sanction and coercion by the state, won’t be able to participate in the same kind of activities”.

MP Marcus Fysh provoked controversy by calling the plan “authoritarian” and adding: “This is not Nazi Germany.”

But Marie van der Zyl, president of the Board of Deputies of British Jews, said comparing vaccine passports to the Nazi regime was “completely unacceptable”.

The 24-page document setting out laws for Covid passes in England says organisers and venue owners must take “reasonable measures” to ensure they do not admit people who are not fully vaccinated or have a negative test.

It also makes it an offence to “make or supply others with false evidence of Covid status knowing that it is false or misleading”.

CBI director general Tony Danker warned the Government about the unintended consequences on Plan B on businesses.

He said: “The economy should remain as open as is feasibly safe to do so in the coming weeks. The bar should be high when it comes to any new restrictions on economic activity beyond Plan B.

“More effort must go into promoting actions that can build confidence and protect public health, like daily contact testing and mask wearing.”

He added: “The Government rightly must act when new data comes to light.

“But we are concerned that the rhetoric from some risks instilling a lockdown mentality when, in actual fact, the proposed measures are far short of that.

“The result is a double whammy to firms who see demand fall without any commensurate support. We must beware of unintended consequences to the economy.”

Vaccines have been our best weapon in the fight against Covid-19 by keeping our loved ones safe.

However, we know there is a tidal wave of infection coming with the Omicron variant and we are once again in a race against the virus, so we have to work even harder to stay ahead.

Omicron cases are doubling every two or three days and the latest data shows that it is vital to get a booster jab to stay protected.

A third dose has been found to be 75 percent effective at preventing symptomatic infection.

Our phenomenal vaccine rollout over the last year has seen more than 121 million first, second and third jabs given in all four corners of the UK.

Our booster programme is the most successful in Europe and among the best in the world, with more than 23 million boosters administered in the UK. This means more than four in 10 adults have that protection this winter.

We had a record day of boosters on Saturday, with over half a million given one across the UK – and we need your help to do even more and get jabs in arms even faster.

We’ve opened the programme to every adult in England who has had a second dose of the vaccine at least three months ago to give them the chance to get their booster before the New Year, which is a month earlier than was planned.

That means anyone over 18 can walk into a vaccination centre to get boosted now and, from Wednesday, they can book online.

Over the coming days, you will see more vaccination sites – including pop-up and mobile sites – and they’ll be working seven days a week.

And we’re drafting in 750 Armed Forces personnel to provide their invaluable help to coordinate the national effort.

The renewed vaccine mission is like nothing we have done before.

But I know based on the incredible hardworking NHS staff, the phenomenal support from volunteers and the enthusiasm we have seen from millions of people to come forward for their jabs, that this country will step up to the challenge.

I urge all Daily Express readers to not only carry on playing their part to help us build up our defence against the virus, but encourage your friends and family to come forward as well.