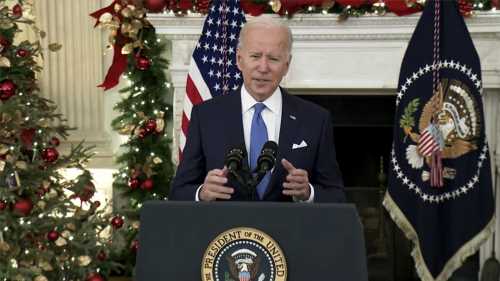 President Joe Biden said Tuesday that his administration is ramping up testing and hospital resources to combat the omicron variant, but promised that the country will not return to lockdowns that were seen in March 2020.

Biden also again urged people to get vaccinated and get booster shots, saying it is a “patriotic duty.” He called out media outlets that have spread misinformation about the vaccines in unusually direct terms.

“The unvaccinated are responsible for their own choices,” Biden said. “But those choices have been fueled by dangerous misinformation on cable TV and social media. These companies and personalities are making money peddling misinformation. It is wrong. It’s immoral. I call on the the purveyors of these lies to stop it. Stop it now.”

Biden noted that President Donald Trump recently said he had gotten the booster, saying it was “one of the few things he and I agree on.”

Biden said the government would deliver 500 million free, at-home rapid tests, in an effort to address a testing shortage. The administration will set up a website where Americans can request the tests, which will start to be delivered in January.

“The omicron virus spread more rapidly than anybody thought,” Biden said, when asked why the testing shortage happened so quickly. “All of a sudden, it was like everybody rushed to the counter. It was a big, big rush.”

Biden said those who are vaccinated should feel comfortable moving ahead with their holiday plans, and said that public health measures are in place to address a surge of cases.

“We’re prepared today for what’s coming,” he said. “In March of 2020, we were not ready. Today we stockpiled enough gowns, masks and ventilators to deal with the surge of hospitalizations among the unvaccinated. Today we’re ready.”

Biden also took a few questions about the Build Back Better legislation, which appeared to collapse on Sunday when Sen. Joe Manchin came out against it.

“Senator Manchin and I will get something done,” Biden said.