In the one-hour special, senior Labour figures were accused of interfering with the disciplinary process – something Labour has denied. The damning documentary saw the party condemned from all angles on social media, including from its own MPs. To make matters worse, the Labour Party’s Twitter account was also briefly hacked. The hacked post from the Labour Party press team read: “There we have it folks, proof if any was needed that the Labour Party IS institutionally racist and will not be until Corbyn and his cronies go #EnoughUsEnough #Panorama.”

Labour then swiftly deleted the post and said: “This account was briefly hacked. It has now been re-secured.”

In the documentary a total of eight former Labour officials spoke to Panorama, warning the Labour leaders office was “angry and obstructive” when it came to anti-Semitism cases.

Labour has denied the accusations and stated “the rate at which anti-Semitism cases have been dealt with has increased four-fold”.

In response to the documentary, Tory leadership hopeful Jeremy Hunt has described Labour leader Jeremy Corbyn as “either wilfully blind to anti-Semitism or anti-Semitic himself”. 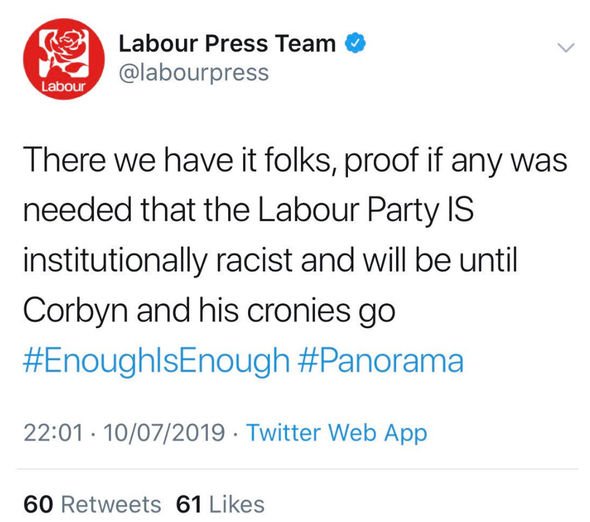 Mr Hunt wrote on Twitter: “The vast majority of Labour MPs I know are decent patriots.But there can now be no doubt that they are led by a man either wilfully blind to anti-Semitism or anti-Semitic himself. Shame on you @jeremycorbyn for allowing this cancer to infiltrate our politics.”

In response to the Labour Party’s rejection of anti-Semitism, TV presenter Rachel Riley, who has been outspoken on anti-semitism claims within the party, accused Labour of “lies on top of lies”.

The Labour Party said: “We completely reject any claim that Labour is antisemitic. We stand in solidarity with Jewish people, and we’re taking decisive action to root out the social cancer of antisemitism from our movement and society. #Panorama” 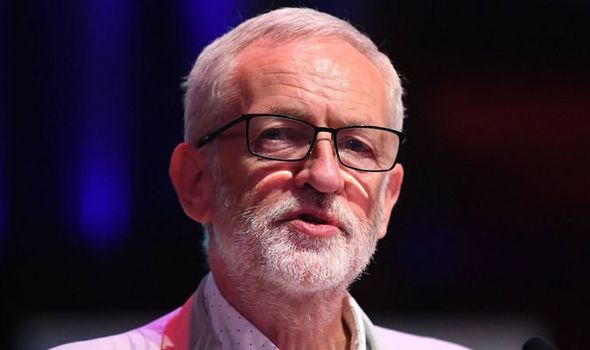 Whilst Ms Nandy hit out at the statement issued by Labour over anti-Semitism, she wrote on Twitter: “I know some of the staffers on tonight’s Panorama. They joined the Labour Party, like me and most party members, because they hate racism as much as they hate poverty. A statement accusing them of having “political axes to grind” is deeply wrong and indefensible.”

The Labour Party has rejected any allegations of anti-semitism and stated “we stand in solidarity with Jewish people”. 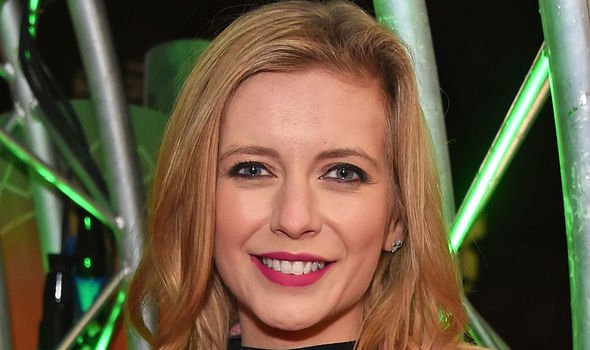 The Party wrote on Twitter: “We completely reject any claim that Labour is antisemitic. We stand in solidarity with Jewish people, and we’re taking decisive action to root out the social cancer of antisemitism from our movement and society. #Panorama

“Jeremy Corbyn has repeatedly expressed his support for Israel’s right to exist and for a two-state solution, with a secure Israel alongside a secure and viable Palestinian state. #Panorama”

A Labour spokesman said: “The Panorama programme and the BBC have engaged in deliberate and malicious representations designed to mislead the public.

“We completely reject any claim that the Labour Party is anti-Semitic. 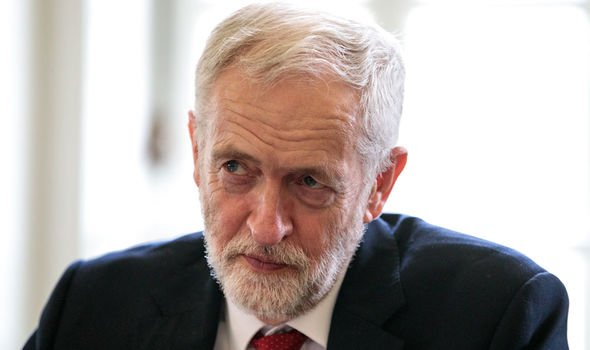 “Labour is taking decisive action against anti-Semitism, doubling the number of staff dedicated to dealing with complaints and cases.

“It appears these disaffected former officials include those who have always opposed Jeremy Corbyn’s leadership, worked to actively undermine it, and have both personal and political axes to grind.

“This throws into doubt their credibility as sources.

“Our records show that after these officials left and after Jennie Formby became general secretary, the rate at which anti-Semitism cases have been dealt with, increased more than four-fold.”

New Jersey man dies after hit by July 4 fireworks blast: reports
We and our partners use cookies on this site to improve our service, perform analytics, personalize advertising, measure advertising performance, and remember website preferences.Ok