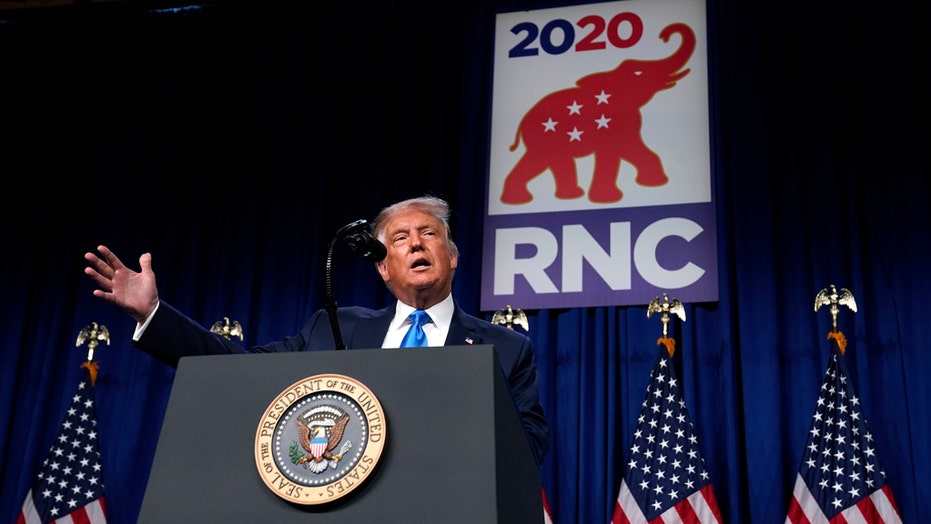 Anti-Trump activists are organizing protests and a concert to make noise in downtown Washington, D.C., with the intention of disrupting the president’s planned outdoor acceptance speech at the Republican National Convention on Thursday night.

A fireworks display is expected at the Washington Monument at the conclusion of his remarks.

The action began at noon with a “Power to the People Rally for Workers Rights” held outside Jeff Bezos’ Washington, D.C., home.

Protesters appeared to construct a guillotine in Bezos’ driveway. Guillotines were used to behead elite French nobility during the French Revolution.

The protests drew about 100 demanding a $30 minimum wage at Amazon.

"Give a good reason why we don't deserve a $30 minimum wage when this man makes $4,000 a second," former Amazon employee Chris Smalls said, according to the Washington Examiner. This week, Bezos became the first person ever worth $200 billion.

Grassroots organizers are planning a “Purpose Party” at the Black Lives Matter Plaza from 7:30 p.m. to midnight. The party will include three stages and five DJs.

Then from 9 p.m. until 11 p.m., the scheduled time of the convention, Shutdown DC is planning to hold a “Drown Out Trump Live GoGo Show and Noise Demo” with live performances on the corner of 17th St. and Pennsylvania Ave.

The Metropolitan Police Department (MPD) said it had not issued a permit for such a concert but that doing so would fall under the jurisdiction of Park Police. Park Police disputed that, saying that 17th and Pennsylvania, where the concert is planned for, is a city street and therefore MPD would be in charge of issuing such a permit.

A Park Police spokesperson also expressed confusion over whether it would actually be possible to hold a concert there given how close it is to the White House and how the entire area is blocked off by bollards.

Organizers are also planning a yoga session, a vigil to honor Black lives lost to “state violence in the D.C. area,” and a “Paint and Protest” event at Black Lives Matter Plaza.

A fresh round of protesting has hit the nation’s capital after the police shooting of 29-year-old Jacob Blake in Kenosha, Wis., which reportedly paralyzed him from the waist down.

Sell the day and go away? U.S. stock returns come overnight
We and our partners use cookies on this site to improve our service, perform analytics, personalize advertising, measure advertising performance, and remember website preferences.Ok