Americans Think Our Democracy Is on the Brink. So Does Biden.

We examine the president’s speech in Philadelphia with Zolan Kanno-Youngs, a White House reporter. 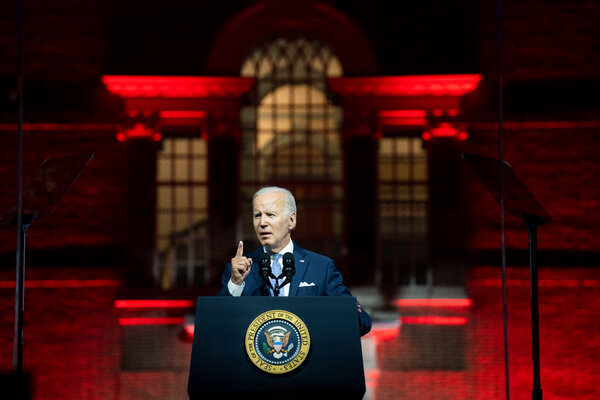 By Blake Hounshell and Zolan Kanno-Youngs

In a new national poll this week from Quinnipiac University, 67 percent of American adults said they thought the country’s democracy was “in danger of collapse.”

That’s a huge number. And, as Quinnipiac noted, it is an increase of nine percentage points from its January survey, when 58 percent of Americans said the same thing.

One noteworthy caveat: “Adults” is not the same as “likely voters,” which is what political pollsters use to estimate who will turn out to vote in the next election. Figuring that out is as much art as it is science, as any pollster worth their salt would acknowledge.

So Democrats have caught up to their Republican counterparts. But their views of who might be responsible for that potential collapse differ greatly, as Peter Baker writes in a forthcoming story analyzing the data in greater detail.

The numbers are “disturbing,” Larry Sabato, the longtime director of the Center for Politics at the University of Virginia, said in a tweet reacting to the Quinnipiac poll. It doesn’t mean that American democracy is collapsing or will collapse; we’ve arguably endured far worse at various times in our history, and yet, like Tom Brady, we’re still here.

But it does mean that people’s confidence in our system of government is declining to an alarming degree.

In December, most of the Democratic and Republican political strategists I spoke with said democracy wasn’t a huge topic in their private polling and focus groups and wasn’t likely to move votes in the midterms.

Some Democrats also told me then that they worried that drawing too much attention to the issue of “threats to democracy” (as Democrats describe the topic) and “electoral integrity” (as Republicans describe it) would help Republicans, as Donald Trump’s baseless conspiracy theories and election falsehoods seemed to be a powerful motivator for voters in his party’s base.

If more voters are indeed starting to prioritize democracy over other issues, that is big news in the political world. But the evidence for that notion is thin at the moment.

President Biden laid out his own concerns about American democracy with a prime-time address on Thursday at the National Constitution Center in Philadelphia. My colleague Zolan Kanno-Youngs was there to capture it along with Michael Shear, his frequent collaborator.

I asked Zolan to unpack Biden’s speech — why he made it and what the White House’s political calculations might be, alongside the serious concerns the president laid out in his 24-minute address. (Be sure also to read Peter Baker’s analysis and Jonathan Weisman’s takeaways.)

Our Slack chat, lightly edited for length and clarity:

You’ve been following President Biden’s focus on threats to democracy for a while now, including his idea for a summit rallying the world’s democracies and Thursday’s speech in Philadelphia. What’s your read on why he is doing this?

President Biden has said all along that it is this threat against democracy that motivated him to run for president. For him, this battle began when he saw neo-Nazis and white supremacists marching through Charlottesville in 2017.

From the conversations I have had with sources in and around the White House, the president is genuinely concerned about the rise of autocracy overseas and about extremism within the United States. He came into office expecting that people would leave Trumpism behind and that his message of unity and national healing would resonate. That obviously hasn’t happened.

Some of his supporters found that assumption to be out of touch with the current polarized state of the nation. He had been planning Thursday’s speech since early this summer because of persistent false claims of election fraud and the impending midterm elections, according to officials familiar with the matter.

When you talk to people at the White House, do they say that there is a political upside to Biden’s emphasis on saving democracy from the Republican Party, or that it is purely about substance? Because the political portion of my brain wonders why he keeps returning to a swing state for these speeches.