Afghan nationals who risked their lives to work with the U.S. government over the 20-year war are pleading with the Biden administration to get them and their families out of their country before it’s too late.

A month after President Joe Biden announced the withdrawal of all remaining U.S. troops from Afghanistan by Sept. 11 of this year, the nation is facing an uptick in violence by the Taliban against both Afghan security forces and civilians.

On Friday, a bipartisan group of lawmakers urged Biden to immediately evacuate the thousands of Afghans who worked closely with U.S. forces and criticized the State Department for not moving fast enough to evacuate those in immediate danger.

“In the past month, we have been closely following your developing withdrawal plans. We appreciate the complexity of ending the War in Afghanistan, but we are increasingly concerned that you have not yet directed the Department of Defense be mobilized as part of a concrete and workable whole of government plan to protect our Afghan partners,” the lawmakers wrote. 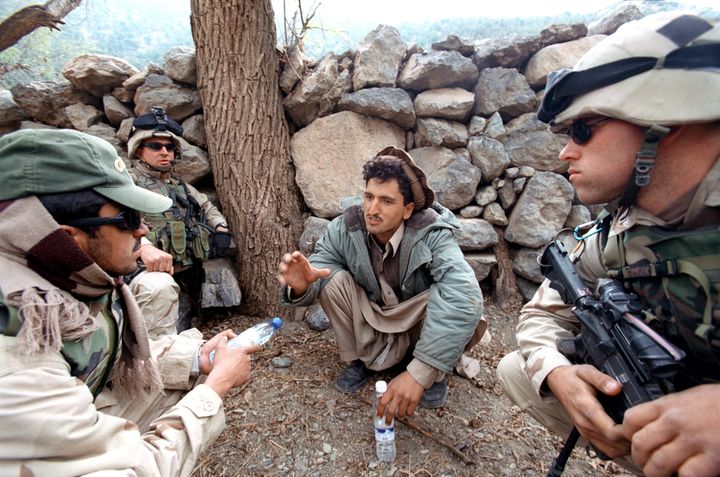 The U.S. has a special immigrant visa, or SIV, program that allows people who worked as translators and interpreters with the U.S. military or NATO in Iraq and Afghanistan to come to the U.S., at times along with their spouse and unmarried children under 21. The program is considered vital for recognizing their sacrifice and the risk they face in their native country: At least 300 interpreters have been killed in Afghanistan since 2016.

Nearly 26,000 special immigrant visas have been allocated since December 2014, according to the State Department. But more than 18,000 people who have applied for special immigrant visas to the U.S. are still awaiting approval. Advocates and resettlement agencies said that the demand is growing since the Biden announcement, but that wait times are not moving any faster — some applications have taken more than 500 days.

“While U.S. troops will leave by September, the United States will maintain a robust diplomatic presence through the U.S. Embassy, and our teams in the Consular Section in Kabul and in Washington will continue processing SIV applications as expeditiously as possible, as the security situation in Kabul allows,” said a State Department spokesperson. “Everyone involved in the Special Immigrant Visa process, whether in Washington or at our embassy in Kabul, is aware of the threats our Afghan colleagues face.”

“While we remain focused on the peace process, we also have a commitment to Afghans who served the U.S. government at great personal risk to themselves and their families, and we are processing Special Immigrant Visa (SIV) applications as quickly as we possibly can,” the spokesperson added.

In 2007, Abdul applied for a special immigrant visa for himself and his family, including his then-18-year-old son Walid Omid Habibi. Both men worked as interpreters for the U.S. Army in Kabul, with Abdul putting in more than 16 years. Now his son is 32, married and has two toddlers of his own.

Abdul finally arrived in New York this March, and his son joined him in April. Both men were forced to leave behind their wives and children in Afghanistan and told HuffPost that with each passing day, their families’ lives are at risk if the Taliban finds out the two of them worked with the U.S government.

“My wife and children are under threat of the enemy,” Abdul told HuffPost. “I worry about them.” He said his family has been threatened by the Taliban before.

“If the Taliban recognizes that we have worked with the U.S army, our families face that same danger,” added Walid. “There is no difference between American forces and those Afghans who served with the U.S. army.”

According to a United Nations report published earlier this week, the security situation in Afghanistan remains volatile, with 2020 emerging as the most violent year ever recorded by the U.S. The U.N. noted that the Taliban was responsible for the majority of targeted assassinations that have particularly increased over the last three months.

“If [Afghans] are found to have worked for the U.S. Army in the past and the Taliban captures them, they are going to kill them. No questions. That’s clear to everybody. They have done so many times before,” said Najeebullah Aminyar, a 2014 SIV recipient and ambassador with the organization No One Left Behind, a nonprofit that provides aid to former Afghan and Iraqi interpreters who resettled in the U.S. through the SIV program.

“The Taliban have captured many interpreters and have killed them and their families, and the situation is going to be much worse once the coalition forces leave,” said Aminyar, who urged the U.S. government to consider temporarily evacuating those in danger to third countries as they wait for their visas, as the U.S. once did with Vietnamese refugees and workers.

“Our ultimate goal is to end four decades of conflict through a just and durable political settlement. We continue to urge the parties to engage in serious negotiations and reach an agreement on a permanent and comprehensive ceasefire. It is in no one’s interest for Afghanistan to return to civil war,” said the State Department spokesperson.

Ramiz Nawabi, a 32-year-old Afghan national, helped maintain and oversee the movement of U.S. cargo in the country from 2011 to 2016, when he applied for a special immigrant visa. He was finally granted the visa to resettle in the U.S. in 2020 but was delayed because of pandemic-related travel restrictions. He arrived in New York this March after he was forced to abandon his wife and siblings.

“This situation in Afghanistan is getting worse, and you do not know what will happen tomorrow,” said Nawabi. “[The U.S.] needs to speed up the process.”

The SIV program has been plagued by lengthy wait times and complicated security measures only exacerbated by the pandemic. After several calls by members of Congress, advocates, and former veterans, the Biden administration announced last month that the administration would review the SIV programs in order to address the extensive delays.

Still, many have noted that the process has been excruciatingly slow.