A severe drought is gripping the Western U.S. as wildfire season begins 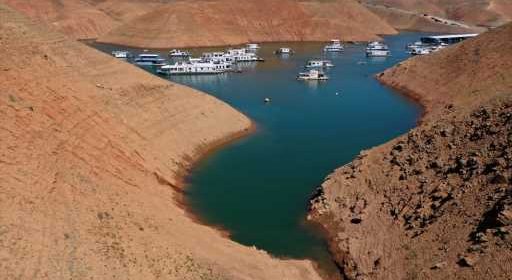 Nearly three-fourths of the U.S. West is grappling with the most severe drought in the recorded history of the U.S. Drought Monitor, as hot and arid conditions are set to exacerbate the threat of wildfires and water supply shortages this summer.

Parts of California, Nevada and Washington State experienced sweltering triple-digit temperatures over the past week amid the drought, according to the National Weather Service, with states releasing excessive-heat warnings and heat advisories in some areas.

Conditions this spring are much worse than a year ago. In fact, nearly half of the continental U.S. is in a moderate to exceptional drought, marking the most significant spring drought in the country since 2013, according to scientists with the National Oceanic and Atmospheric Administration.

The U.S. Drought Monitor, a team of academic and government scientists, started roughly two decades ago. It is updated every Thursday to display the location and intensity of drought across the country.

In California, which frequently experiences drought conditions and massive wildfires, state reservoirs are currently 50% lower than they should be this time of year, according to an Associated Press report, which could trigger hydroelectric power plants to shut down during the worst part of wildfire season.

Farmers in the Northwest are also dealing with growing drought damages to crops and struggling to irrigate fields as water levels go down.

"72% of the western US is currently in 'severe' drought or worse. This is now the most extensive severe drought in recorded history," climate scientist and activist Eric Holthaus wrote in a tweet. "We are in a climate emergency."

Climate change is making drought and other extreme weather like hurricanes wildfires more frequent and intense.

Researchers also say that rising temperatures have pushed the American Southwest into a decades-long megadrought, resulting in declines in snowpack, lake and river levels and groundwater availability, among other things.

"After two water years of dry conditions, both California and Nevada are now 100% in drought," according to an update on Friday from NOAA's National Integrated Drought Information System.

"And with dire drought conditions, rapidly decreasing snowpack, and low reservoir levels, concern for wildfire season is growing," it said.